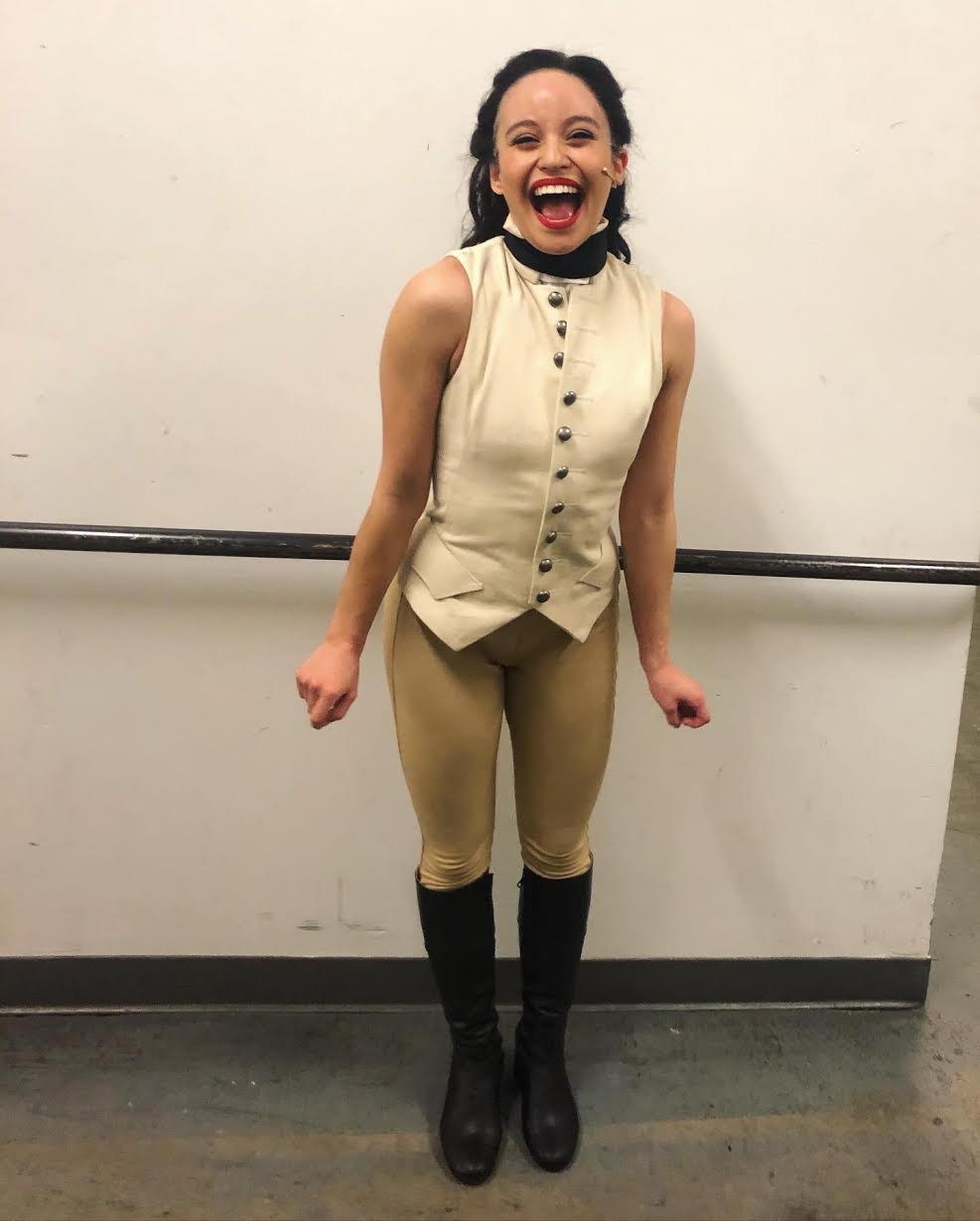 Chloe Nadon-Enriquez (Communication ’19) models one of her “Hamilton” costumes. Nadon-Enriquez joined the San Francisco “And Peggy” Company in December 2019.

Chloe Nadon-Enriquez (Communication ‘19) didn’t throw away her shot to land the role of a lifetime — a swing in the San Francisco cast of “Hamilton.” The Miami native began her musical theater journey at Northwestern, and during her final years, auditioned for “Hamilton” on a whim. The young, scrappy and hungry alumna joined the “And Peggy” Company in December 2019 and now performs to sold-out audiences. Nadon-Enriquez sat down with The Daily to dish about the production’s long audition process, her experience performing the show as a biracial woman and her favorite “Hamilton” moment.

What is your current role in “Hamilton”?

What I love about my job is that it keeps me on my toes, mentally and physically. I feel like in a way I’m still in school, which I love. I think people often get the wrong idea about swings because we’re often the unsung heroes of the Broadway world. I actually really enjoy it, and I think it’s a great way to keep me mentally engaged every second I’m onstage. It’s a very difficult but rewarding job.

What was the audition process like for “Hamilton”?
In December (2018), I got an email with audition appointment information, which is basically a callback for dancers. It was happening in New York and I think I had a 48-hour notice. I was thinking, “You know what? ‘Hamilton’ is a great show for a dancer and especially a person of color.” So I booked a flight from Chicago — it was finals week, I took my last final, and I went to New York. I didn’t know where I was going to sleep that night … I essentially couch-surfed.

(After several callbacks,) in July, I was making plans to move to New York. I was currently doing “In the Heights” at Music Theatre Wichita. That was my first professional job out of college. On the first day of rehearsals, I got a call from my agent giving me the offer for the San Francisco production of “Hamilton.”

What is your personal connection to “Hamilton”?
What I think is cool about “Hamilton” is that instead of taking a narrative that is one about people of color, (Miranda) took a narrative that is white, and instead took people of color to tell that narrative. I think the point of that is that America is a country of immigrants, so why are we only telling white narratives? Why are we only putting Caucasian people in positions of power?

How do you navigate your role in “Hamilton” as a biracial woman?
You barely see ensembles filled with people of color unless the role specifically calls for it … I think that’s what I love about “Hamilton.” I don’t feel like I’m not colored enough and I don’t feel like I’m not white enough. And that’s the first time I’ve ever felt like that in a show process. I feel like I am truly embraced for who I am and what I look like, rather than being put in a box for how I look.

What is your favorite moment in the show?
It all starts at the top. The beginning of the show is so powerful and well-staged. There’s a moment in “Alexander Hamilton” where everybody in the show sings, “Alexander Hamilton, we are waiting in the wings for you / You could never back down, you never learned to take your time.” During that line, everybody in the show comes downstage and stand in one line. There’s no difference between principle characters and ensemble members, everyone’s mixed up next to each other. It’s a moment of silence where you think ‘I’m about to tell this story for two and a half hours, what does it mean?’ And it manifests itself differently on people’s faces, where (the audience) brings their attention forward. It’s powerful to watch, but I think it’s more powerful to sing.