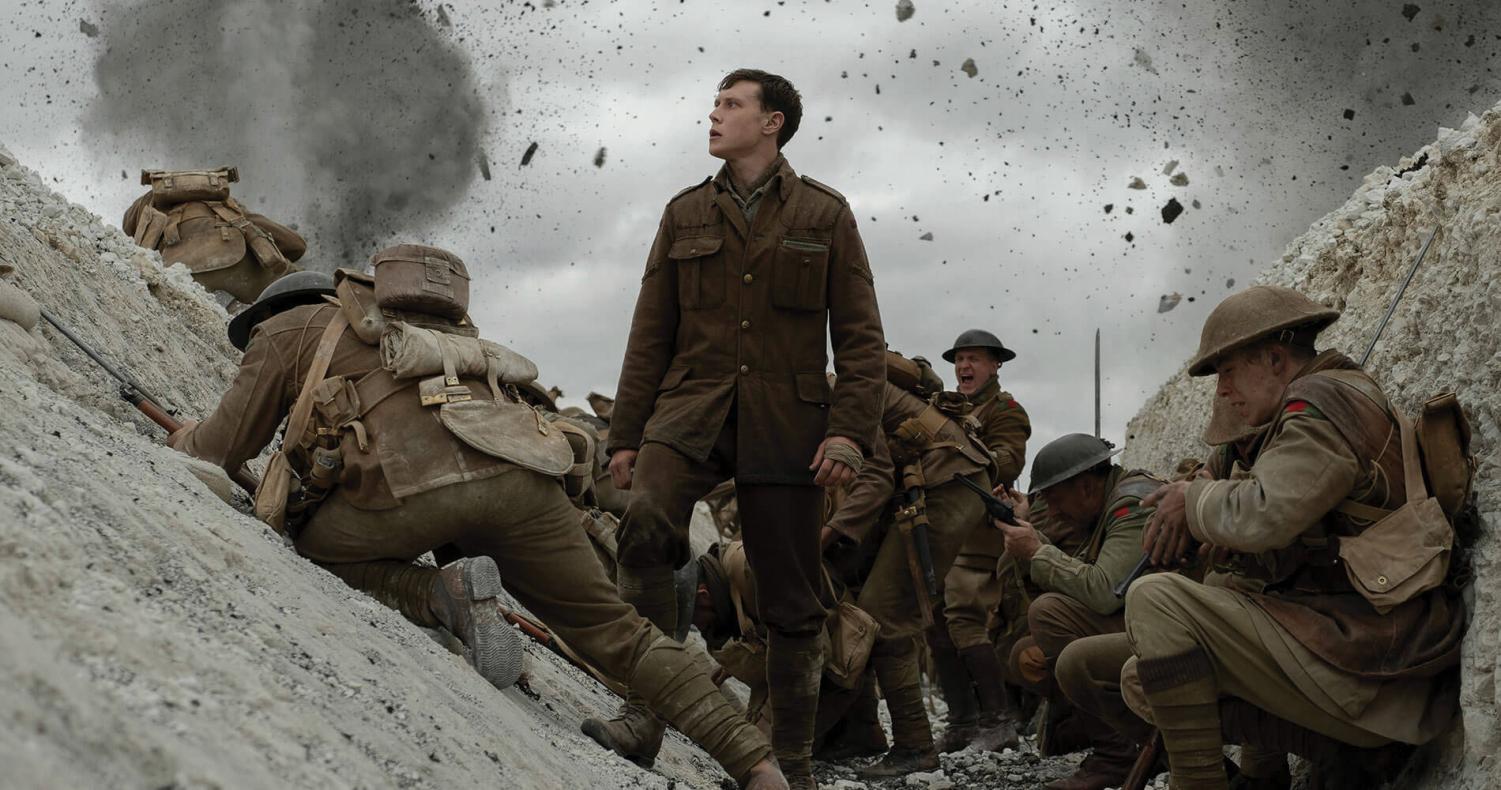 Reel Thoughts: ‘1917’ is a bloody good movie worthy of all the nominations

My experience with war movies is brief — I’m pretty sure the last one I watched was “War Horse” in 2012. It’s safe to say I’m not an expert.

I wouldn’t proclaim that “1917,” directed by Sam Mendes, is “more than” a war movie, or does anything particularly revolutionary within the genre as far as plot alone goes. Yet the film has shaped up to be one of my favorite things I’ve seen in awhile.

Although the first ten minutes or so are filled with English my simple Midwestern ears couldn’t quite understand, the movie’s premise soon becomes clear: Corporals Blake (Dean-Charles Chapman) and Schofield (George MacKay)have to travel into enemy territory to prevent a British battalion from raging into a German trap. The duo has only one day to save 1,600 men, among them Blake’s older “brutha,” as he frequently reminds viewers in his youthful accent.

To start, the cinematography was truly worthy of its Oscar nom. “One-take” films always intrigue me as a high-risk, high-reward feat. This style fits the movie perfectly: their mission takes place over the course of about 24 hours, pulling viewers along as they try to meet their goal trekking over vast landscapes, swimming through deep blue bodies of water and tiptoeing through ramshackle houses. I literally had a tension headache from clenching my jaw and holding my breath 45 minutes in — every other shot seemed to make the audience groan, sigh or gasp with its weight. We traveled with Blake and Schofield every step of the way; we held the written order to stop the troops in our own breast pockets.

Striking portraits fill the movie: tired British soldiers filing through the trenches as Blake marches forward in the opposite direction, bloated bodies floating in a river bank, men listening to a wavering rendition of “Wayfaring Stranger.” And of course, the pivotal scene, where Schofield dashes above the trenches to deliver a message, tripping and falling over his fellow soldiers as bombs rain from the sky and cloud the screen with dust.

Pacing, something all good dramas require, carries the movie. Between periods of intensity that left me pushing into the back of my seat, there are plenty of tender, careful moments: Schofield comforting a young woman and child, dry-humored soldiers sharing cigarettes and stories in the back of a truck. There are limits to this type of measured storytelling — the panning to show quotidian soldier life sometimes dragged on or became repetitive, and as much as I love MacKay’s acting, I could only watch him turn around in a circle and shout someone’s name for so long. But the score, composed by Thomas Newman, swept viewers along for the ride, even during slower stretches.

Beyond the thrilling shots and colors of the film, the acting is also phenomenal. MacKay plays a brilliantly pragmatic and stoic Schofield, who didn’t ask to be a part of this mission but carries it out anyway with a brutal determination. His haunted expressions gave me “All Quiet on the Western Front” vibes, but British. (Those baby blues — no wonder he used to date Saoirse Ronan!)

As with any historical war movie, the sets take everything to a new level. Stark contrasts between the sloppy British camps and ordered German trenches spoke volumes about the status of both sides during the war. Viewers can feel the exhaustion as Schofield trudges up barbed wire-covered hills and jumps over low walls to escape. Even the rats, who crawl their way through many a shocking scene, were robbed of an Academy nod (#OscarsSoHuman).

“1917” is a technically precise movie about the quiet moments of will and the individual missions that make up the first of two long world wars. Even though I found myself occasionally wanting subtitles, it’s worth seeing in theaters before the Oscars next month. Between its bombastic instrumentals and incredible cinematography, the big screen is best medium to watch this mission to save 1,600 troops — including one man’s “brutha.”