Borrok: What I learned about life from Mac Miller 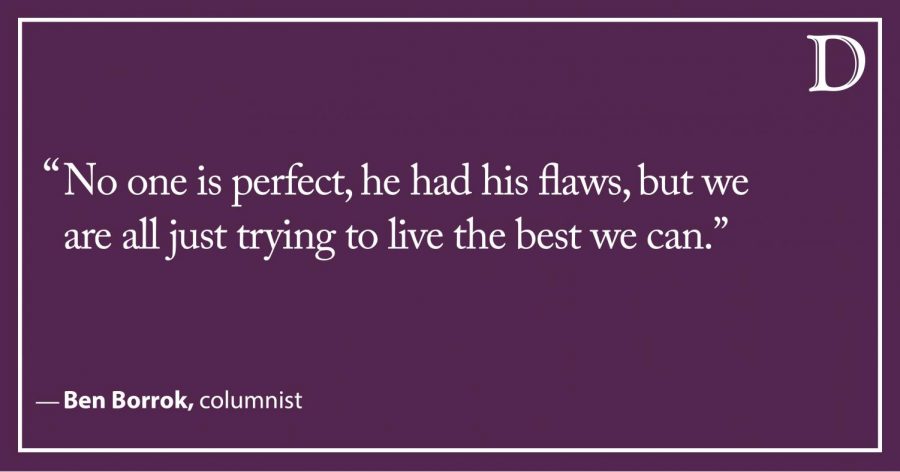 What does it mean to live? Beyond surviving, what are we meant to be doing here with the time we are given? Existential questions like these were common themes of the late Mac Miller’s albums. Starting his career as a classic “fratty” rapper with hits like “Knock Knock” and “Nikes On My Feet,” Miller grew into a dynamic force in music over the course of the last decade, culminating with the posthumous release of “Circles” this past weekend. His tragic death at the hands of an accidental overdose shouldn’t overshadow his impact on his fans and his fellow artists, especially when his story is hardly an anomaly in this day and age.

Miller struggled with addiction. It’s not a secret, and to avoid its discussion would be a disservice to him. Young people resonate with him because of how candid he was regarding his own demons. Isolation commonly becomes a coping mechanism for those suffering a similar struggle and shame usually follows. Following his initial battles with drug use, Miller wrote the albums “GO:OD AM” and “Swimming,” that display his ability to reflect on the mistakes he made and the future he envisions for himself.

Unlike so many artists today, Miller exhibited an ability to grow with his followers. His rap career began at age 15, far before maturity could be expected. What was so special about his career was that he refused to let himself get labeled as one-dimensional. It’s the first lesson he taught me: Don’t live your career for someone else.

Instead of appeasing the initial fans of his music by reproducing the same generic form of hip-hop, he invited the world to come along with him on his own musical journey. Too often, we cede control of our fate to others, living a life chasing the ambitions and expectations of the people that surround us. We seem to lose sight of what is actually important in our quest to merely survive. Miller’s final two albums were a step in a new direction, embracing his singing ability that he had hidden away for so long.

“Circles” is deeply personal. It exposes the insecurities of an artist who inspired such confidence in the people who were in contact with him and his projects. Despite all the success he had achieved in his career, the new album reveals a plethora of concerns he had about himself and the world around him. It’s the second lesson he taught me: Question everything.

As a college student, there isn’t a day that goes by without some sort of anxious thoughts regarding my future. Will that feeling of inadequacy ever go away? Will I learn the skills required to be successful? Will my career make me happy? Much of the sentiment in these questions is reflected in Miller’s music. He sings of hoping to make it through the day without sadness, to escape from the fears and anxieties that riddle his head. He wonders, outloud, if there is a path to normalcy. The anguish in his songs was hidden within him for so long, fueling his addiction. To come to terms with these ongoing concerns was a form of therapy, possibly a message from Miller himself to anyone out there going through a similar situation.

Hearing him mirror my concerns gave me comfort in my discomfort. I realized that there is nothing wrong with seeking answers and trying to decode the world. To worry about life is part of the human experience. No matter how old you are or how much success you have, life has a way of reminding you that no one is perfect. If Mac Miller, with his musical success, following of loving fans, and tight-knit group of friends didn’t have it figured out, then what pressure is there for me to put it all together?

In the lead up to “Circles,” a video of Miller surfaced online in which he encouraged fans to have an optimistic outlook on life. “Life is great. Your life is great too. Have a good time, man, have some fun.” he exclaims. The video ends with the most important lesson he taught me: It’s okay to have fun.

I transferred to Northwestern from a small school where I was deeply unhappy. I couldn’t find my place in their ecosystem and knew that I needed a fresh start. But while I was there, I compounded my unhappiness by comparing it to the lives of my friends on social media. I punished myself for being alone by further isolating myself. I denied myself a chance to create memories and connections.

Arriving at school this year, I knew that I needed to change my mindset. Miller laid it out so simply. All I had to do was relax. Whether I was in the company of friends or enjoying quality time alone, there was nothing stopping me from doing the activities that make me happy. I am responsible for my own fun, and that isn’t as daunting as it used to be.

There are some people that will believe these lessons are invalidated by the drug addiction that ultimately killed him. But to understand Miller’s life as a tragedy would be to misinterpret his ethos. No one is perfect, he had his flaws, but we are all just trying to live the best we can. Taking inspiration from others helps us feel like we aren’t alone on our own respective journeys.

There may be times when you haven’t seen the sun in a while, but Mac Miller wants you to remember that the sky is still blue.