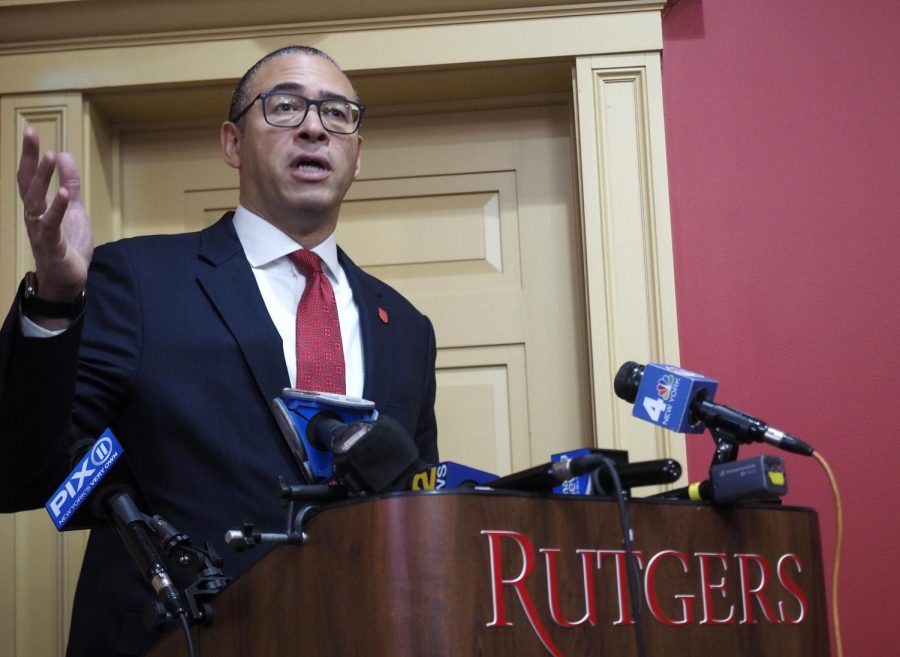 After reports surfaced over the weekend that he was set to leave Northwestern to become the first black president of Rutgers University, Provost Jonathan Holloway reflected on his journey to the role — from his time as a doctoral student to now — at a press conference Tuesday in New Brunswick.

“Mom, I got the job,” toward the end of his emotional speech.

The Rutgers Board of Governors unanimously approved his appointment Tuesday morning at a joint meeting with the school’s Board of Trustees.

Holloway will start his role as president on July 1. In his speech, Holloway spent time opening up about his initial apprehension coming into the role, discussing his hope for strong relationships with those on campus in his role and outlining a vision for the athletic department of NU’s Big Ten rival. He also addressed becoming the school’s first black president.

“The fact is, we are still living in an era of firsts and that comes with an awesome responsibility, which is exciting and very flattering. And also shameful, to be honest,” Holloway told NJ Advance Media. “But this is the work that is in front of me.”

“Since he joined Northwestern,” Schapiro wrote, “he has led with vision, empathy and integrity while ensuring our core values remain intact. He has developed our educational policies and academic priorities and recruited several outstanding new deans to the University’s academic leadership team.”

In his two and a half years in Evanston, Holloway implemented a new review process for deans, helped start the Undergraduate Student Lifecycle Initiative to support first-generation and low-income students and launched Books for Cats as a program to loan students STEM textbooks. He also served as provost through Northwestern’s budget deficit and during student pushback to visiting professor Satoshi Kanazawa last winter.

Congratulations to Provost Jonathan Holloway on this next chapter as President of @RutgersU. Thank you for spearheading essential academic initiatives and bringing leading faculty and deans to the University. https://t.co/Xf7lf8G6Iv pic.twitter.com/hjIS6ZXVjL

Schapiro said in the statement more details on the plan for finding Northwestern’s next provost will be shared in the next few days.

Holloway took over as Northwestern’s provost in Summer 2017, coming to the University as the former dean of Yale College. The University’s previous provost Daniel Linzer served in the role for about ten years.

“Jonathan Holloway is an extraordinarily distinguished scholar with an outstanding record as an academic administrator at Northwestern and Yale,” said Rutgers Board of Governors Chair Mark Angelson, who also chaired the presidential search committee. “He leads with remarkable integrity, and is just the right person to build upon Rutgers’ long tradition as an academic and research powerhouse.”