Women’s Basketball: Behind Scheid and Pulliam, Northwestern surges to 85-59 victory over Penn State 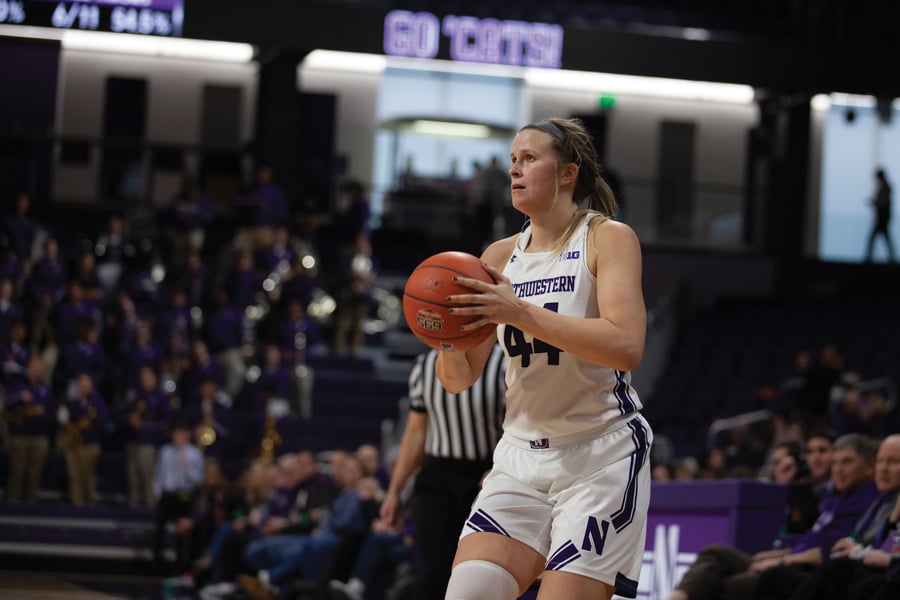 Abi Scheid shoots the ball. The senior forward made every three-pointer she took on Sunday.

Four days after upsetting No. 12 Maryland earlier this month, Northwestern took a major step backwards, losing to Iowa by 26 points. Then, less than two weeks later, the Wildcats defeated No. 15 Indiana 71-69 in an overtime thriller.

Heading into Sunday’s matchup against Penn State, coach Joe McKeown knew the Cats couldn’t afford to have a repeat performance of earlier in the season, only three days after arguably their biggest win.

“They played so hard against Maryland (and in) the Iowa game nothing went right,” McKeown said. “They didn’t want a repeat of that. They were like ‘it’s not going to happen coach.’”

And the team held to their promise to McKeown.

Within the first three minutes of the first quarter, Scheid drained a three-pointer from the top of the key. The shot not only gave the Cats a five-point lead, but also gave the Minnesota native 1,000 career points. Scheid, whose parents surprised her at the game, expressed gratitude towards McKeown for helping her reach the milestone and unlock her success from the three-point line.

“In high school and AAU, I was playing the five,” Scheid said. “I probably shot less than ten threes in my high school career. That attests to what this program can do.”

The senior scored 11 points in the quarter — including eight straight — and grabbed five rebounds. Additionally, the conference’s second-best scoring defense did its part, forcing three Penn State turnovers and 12 missed layups as NU took a 24-7 lead after ten minutes.

Despite a 7-0 Lady Lion run a few minutes into the second quarter, the Cats’ defense — which forced 18 turnovers — only allowed Penn State five more points as the Cats widened their lead to 26 at halftime.

At the beginning of the third quarter, NU’s offense became even more dangerous as its leading scorer returned to form. Since putting up 25 points against Iowa, Pulliam had struggled mightily, going 12 of 57 from the field across three games. Her shooting issues continued Sunday, as she went 1 of 5 in the first quarter.

However, Pulliam eventually found her stride by taking advantage of open looks and using her ball-handling skills to make nice plays near the hoop. The junior, who shot 50 percent from the field, finished with 21 points.

“I know I sucked the last three games,” Pulliam said. “I mean, I knew eventually… I was going to get back on my rhythm. And that’s what happened.”

In the fourth quarter, the Cats led by as many as 35 points , allowing McKeown to rest his starters and give the team’s bench players valuable minutes.

The team’s stellar season has given Scheid hope for a Big Ten Championship. But Pulliam is focused on a larger goal: making the NCAA Tournament for the first time since 2015.

“It just narrows our focus,” Pulliam said. “It just gives us a goal to look forward to and we know what it’s going to take to get there.”