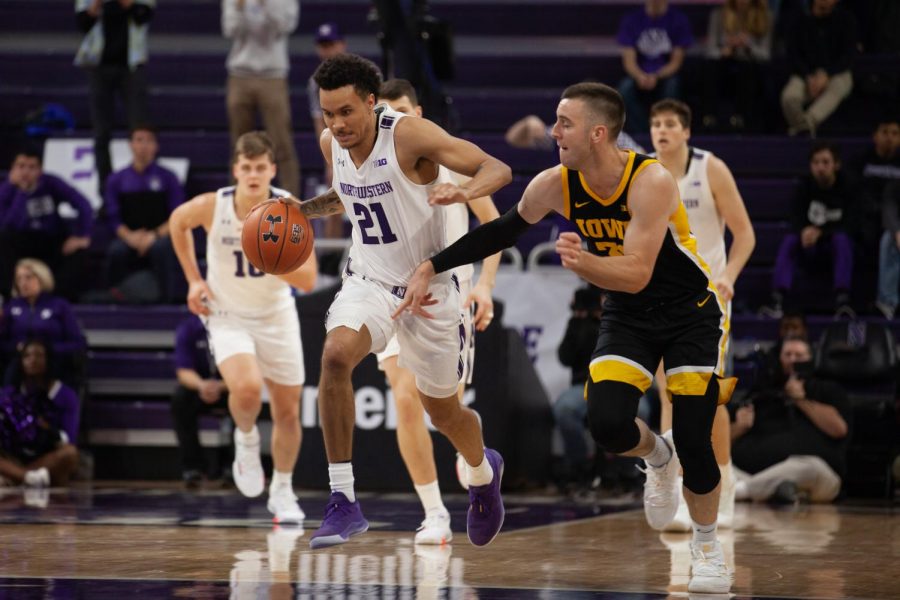 A.J. Turner dribbles the ball. The senior had five points in NU's loss to Illinois.

Heading into the season, coach Chris Collins said he knew what kind of team Northwestern was going to have. He knew the Wildcats’ roster was young, and he knew the seven underclassmen on the team were going to bear more responsibility than they were used to having.

But Collins couldn’t have expected NU to set records for coming up just short.

The Cats were closer to beating their in-state rival than they’ve been in any road game this season, but couldn’t get enough stops down the stretch to finish the upset.

“We knew we were going to be incredibly young and throw a lot of young kids into the fire,” Collins said. “When you do that, you’re going to go through some tough growing pains. We’re going through that a little bit right now. It’s my staff and my job to keep these guys together.”

Even though NU was down 9 points with 3:50 left in the game, the Cats went on an 11-4 run to cut the deficit to 2 points in the last minute. Freshman center Ryan Young started the comeback by making a contested layup through Illinois center Kofi Cockburn, one of the best defenders in the Big Ten.

Later, freshman forward Robbie Beran hit a reverse layup to make it a four-point game, and senior forward A.J. Turner and sophomore forward Miller Kopp made threes to give NU a chance in the last minute. The Cats scored on each of their final four possessions, and their late-game offense was more effective than it had been all season.

All NU was missing was one final stop. In a one-possession game with 18 seconds left, [CQ] the Cats watched the Fighting Illini’s star guard Ayo Dosunmu hit a stepback 17-foot jumper that denied NU a chance to tie the score.

Even though the Cats lost in the end, Collins said he was impressed to see how the team responded in the last few minutes.

Despite NU’s effort, the team lost its fourth conference game of the season by single digits and its fifth game this year by 5 or fewer points. The Cats have never finished a season with more than 10 single-digit losses in conference play, but they’re currently on pace to end the year with 13 losses in-conference by fewer than 10 points.

The schedule only gets more difficult from here as NU faces ranked opponents in its next three games, starting Tuesday against No. 17 Maryland.

“Our guys were worthy of winning tonight and it didn’t happen for us,” Collins said. “You don’t come here for moral victories, you come to win a game. Am I happy with our guys? Yes. Am I proud of our guys? Yes. But I’m very disappointed in the loss.”