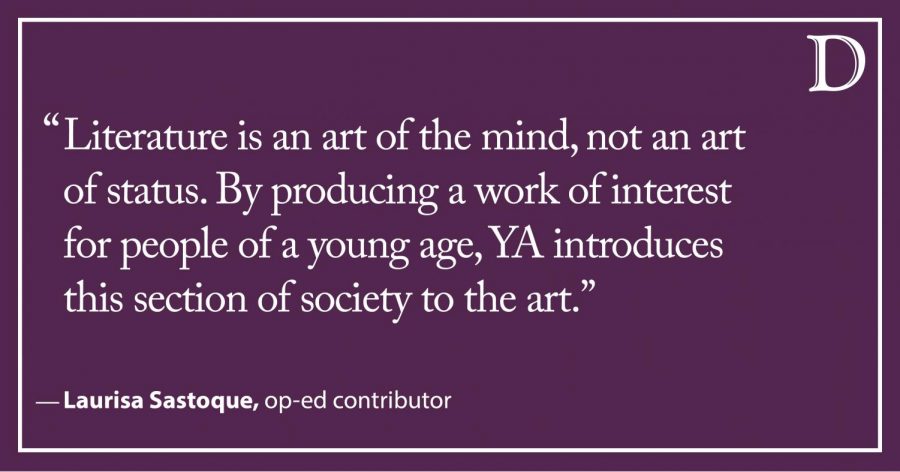 If you ever venture to 1630 Sherman Ave., otherwise known as the Barnes & Noble in downtown Evanston, on a Friday morning, and take the escalator up to the second floor, you might bump into a certain English major browsing the section labeled “Young Adult,” or YA.
You may hear her complaining about how there are already two new installments to Ransom Riggs’ “Miss Peregrine’s Home for Peculiar Children” and how she’ll never have enough time to read them or questioning why there are vampire books under the “YA non-fiction” tag.
Young adult literature has gained popularity over the last few decades. It is comprised of a variety of genres, ranging from fantasy to non-fiction, all aimed at a young audience.
A famous example includes J.K. Rowling’s “Harry Potter” series that started in 1997 with “Harry Potter and the Sorcerer’s Stone.” However, this tradition goes way back, with some tracing its beginnings to S.E. Hinton’s “The Outsiders,” written in 1967.
This category, by virtue of being targeted towards 12-18 year-olds, differs greatly from what most people imagine when they think of literature. Many believe these novels don’t contain the stark social critiques or the melodious writing style that characterize most classics.
In reality, you can find several social critiques, as well as action-packed, heart-accelerating stories with young characters encountering adventures that could be as simple as the evildoings of romance or as complicated as a demonic world threat.
I have heard it all before. I’ve heard of how YA “isn’t real literature” or how it “turns literature into a money-making machine.” I understand where these critiques come from, considering that YA has become a pretty profitable business and that it has given way to some works of very questionable quality.
However, I insist that YA has caused a revival of literature and has succeeded in preventing books from becoming irrelevant in an era of mass entertainment channels. It is very hard to develop an interest in literature when a story is just a Netflix account away.
Before our phones became our best friends, books served as an escape to another world. One where we could not only explore fictional universes but also the interior of our minds. Nowadays, the idea of escaping to another world has become obsolete. Instead we spend most of our days in the world behind our screens.
The truth is, getting the enjoyment and entertainment that a book can offer takes more effort and time than what most people are willing to dedicate. This threatens to reduce the use of literature to academic assignments and airplane pastimes, where you are a mile too high to get any internet connection.
But YA redirects youth to the enjoyment of literature. Whenever I see a kid reading “Percy Jackson,” it reassures me that the art I love the most in the world is nowhere close to dying. It is changing, of course, like everything else, but not dying.
I wouldn’t feel any different if that same kid were reading a book like “Jane Eyre.” While “Jane Eyre” is beautifully written, encompasses a variety of themes and is analyzable in many different levels, “Percy Jackson” is a fun way to learn about classical mythology and represents a diverse range of characters whose experiences are relevant to the current world. Both are perfectly enjoyable and respectable works of literature, quite different in content, but similar in spirit.
I ask myself: What defines what is good literature and what is not? Is it the respect it has earned among a society of arrogant intellectuals? Is it the praise it has gotten from an audience of elites (in every sense of the word)?
The definer is not necessarily the quality of writing, since many renowned works of literature have been targets of critique for their quality — take Paulo Coelho as an example. It all seems to come down to who gets to read the book, who likes the book, and whether that person is in a position of societal power to establish general respectability of the work.
And for me, that is not what literature is about. Literature is an art of the mind, not an art of status. By producing a work of interest for people of a young age, YA introduces this part of society to the art. It plants the seed of love for the smell of pages, for the firmness of a hardcover and for the hours of late-night reading that all book lovers have in common.
YA certainly serves as a springboard into more mature works of writing. I can personally say that, although I’ve been slowly growing out of it, I will forever owe my passion, my dreams and my perspective of life to YA — the type of literature that presented itself as a friendly companion rather than an intimidating bundle of words.
If I had never discovered YA, and had instead founded my view of literature on the approach that it was given at my school (to my English teacher, if you’re reading this, don’t ever make a bunch of eighth graders read “Heart of Darkness” again, because it will wreak havoc) my current situation would be very different.
Therefore, I want to invite all literature lovers to be more appreciative of the effort that authors make to produce works that resonate with young readers’ minds, because not only does it perpetuate the relevancy of literature, but it also raises passionate readers who will be the advocates of the art in the future.
Laurisa Sastoque is a Weinberg freshman. She can be contacted at [email protected] If you would like to respond publicly to this op-ed, send a Letter to the Editor to [email protected] The views expressed in this piece do not necessarily reflect the views of all staff members of The Daily Northwestern.