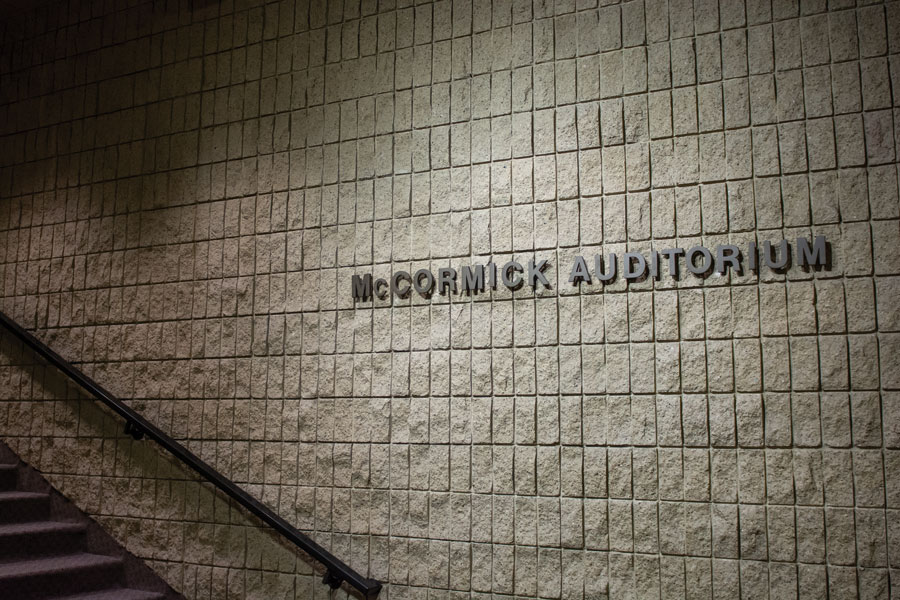 Communication senior Ryan Foreman, who is also the outreach chair of Vertigo Productions, led the event’s production. Foreman is also playing Eric, the lead role in Oduh’s play “Mercy,” and performed the song “Let it Sing” from the musical “Violet” at the open mic event.

“Getting a group of people to take time out of their day to reflect and observe and listen to people share themselves and share their stories is an extremely powerful thing,” Foreman said. “Just because everyone is going day to day and taking time to just sit and watch something that is enriching and increased empathy and understanding from where people are coming from.”

One of the individual presenters was Communication junior Nolan Robinson, who shared a speech about “The Little Mermaid” and how a person’s most powerful tool is their voice.

Robinson used the plot of the movie, in which Ariel gives up her voice for the opportunity to walk on land, as a cautionary tale against giving up the power of your voice.

“As soon as you’re born, the first thing you do, is you cry,” Robinson said. “As soon as you cry, it’s your body telling the world ‘I’m here. You’re going to hear me, because I have something important I need to say. I have something that needs to be heard. I am breaking the silence of the universe. I have the power to speak.’”

Robinson encouraged the audience to speak deliberately, something he learned from his theatre professors at Northwestern. He spoke about the importance of taking a breath and collecting one’s thoughts to ensure you believe in the words you say.

The opening 15 minutes of Oduh’s play “Mercy” closed the showcase. Her play is about a man named Eric, who was wrongfully incarcerated and is returning home from prison. The full version of her play will be staged during Vertigo Productions’ Reading Series in about three weeks.

“It’s like sending your baby off to daycare but not school, yet, because it’s just a small part of it,” Oduh said. “To have so many people reacting, just from the first two scenes, and not even seeing how much Eric will continue to go through in the play, is really inspiring to me.”

Oduh wrote the play this past year as a part of the School of Communication’s advanced playwriting sequence. Her professor encouraged her to write the play that scared her, and to write about something she had a lot of heart space for. Oduh said she was inspired by the finality of life, and how incarceration can unjustly strip away many of the years of someone’s life, she said.

In its first iteration, Vertigo’s event consisted of just two full play readings, but since then it has transformed into a larger open mic for black student groups and black students.

“Reaching out to people in the community, and them being able to come out, and share whatever they want to share, and offering that space,” Foreman said. “Being able to tell them ‘You’ll have an audience, people will be here, what do you want to say,’ is the direction we really wanted to take it.”