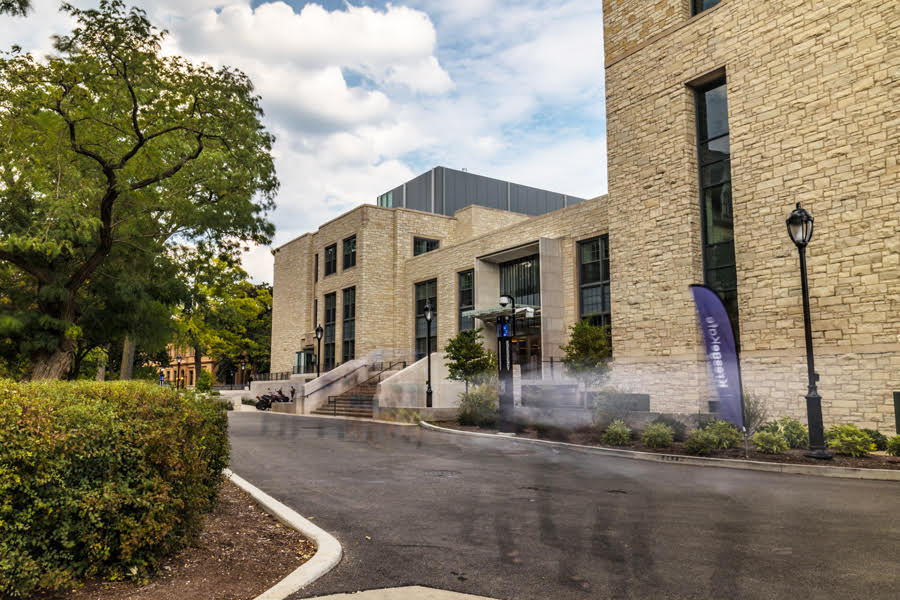 Kresge Centennial Hall. Fulbright applicants will soon learn whether they’ve advanced to the semi-final round of scholarship considerations.

Northwestern applicants to the Fulbright U.S. Student Program will soon learn whether they have advanced to the next phase of selections.

The historic fellowship program grants research funds to graduate and undergraduate students for study and research abroad. All Fulbright semi-finalists will be named by the end of the month, and the winners will be named this spring.

Student proposals span from music to biology to agriculture, and Northwestern —  a top producer of Fulbright scholars every year since 2005 — has produced many successful grant recipients.

Ali Syverson, a graduate student pursuing a master’s degree in public policy and administration and a current candidate for the fellowship, said she hopes to research environmental policy in Panama.

Syverson said she was inspired to apply for the fellowship after traveling to Panama in 2017 where she noticed plastic waste on the island of Bastimentos.

Syverson’s Fulbright proposal, however, focuses less on policy making and more on communicating policy changes to different demographics in Panama, including tourist, Afro-Carribean and indigenous communities.

Syverson currently works at Blue Cross Blue Shield, analyzing the effectiveness of the company’s philanthropic initiatives. She said the Fulbright fellowship would give her a new perspective on social impact.

“At Blue Cross, we’re giving out millions and millions of dollars … but are we really being a good partner to non-profits? I’m not sure,” Syverson said. “I wouldn’t know unless I’ve worked on the nonprofit side too.”

The Fulbright scholarship would give Syverson experience with an international approach to nonprofit impact, she said. She emphasized that she wanted to be careful to avoid a white saviorism narrative coming from a position of privilege.

“I’ve always had a personal passion to want to be a global citizen,” Syverson said. “I want to take the tools and resources that I’ve harnessed and really use them for good,” she said.

Chris LaMountain, a Bienen and Weinberg senior, said he hopes to travel to New Delhi to compare the vocal component of the religious music in India’s Baháʼí temple against other Indian religious centers. The Baháʼí faith, which originated in the mid-1800s near present-day Iran, preaches global unity, necessitating adaptation to local culture, LaMountain said.

LaMountain added that the comparative analysis could illustrate how the Baháʼí faith adapts to local religious musical practices after he saw a lack of research on the topic..

“Unlike pretty much every other Baháʼí house of worship in the world which features a choir … the Lotus Temple only features solo chant that’s often using the Hindustani vocal technique,” he said. “… It definitely reflects a lot of the Hindu chant (or) mantra.”

Weinberg senior Max Sigal said he wants to research potential remedies for the miscommunications between proteins in the human body that can cause diseases such as cancer.

These medicines can be discovered through a variety of processes, but Hiroaki Suga, a professor at The University of Tokyo, recently created a particularly effective method, Sigal said. Sigal would conduct his research alongside Suga on his Fulbright.

Students can also apply to pursue degrees at foreign universities. Ayla Langer (Bienen ‘19) wants to pursue a master’s degree in world food culture and mobility from the University of Gastronomic Sciences in Bra, Italy. Her studies would focus on the anthropological framework of food producers and distributors.

Langer hopes to open her own sustainable food business and help small producers in the Chicagoland area access larger markets. She became inspired after a trip to South Korea where she talked with administrators at Eataly, an Italian marketplace and restaurant with locations in a number of countries.

This year’s applicants come off the heels of previous Northwestern Fulbright scholars. Kalina Silverman (Medill ‘14), a Fulbright fellow in Singapore, founded the award-winning media project Big Talk which encouraged people to have deeper conversations about life. Kali Zhou, (Weinberg ’07) researched health policy in China as a Fulbright scholar, contributing to a 2016 study on treating hepatitis.

Many of this year’s applicants said even if they don’t win their scholarship, they’ll still have benefited from the process.

“Even through the process of refining the proposal, I made connections, I learned about myself, refined my writing technique, and even if I don’t win the Fulbright, it was still immensely beneficial,” Langer said.