Bright: The case for a more deliberative democracy 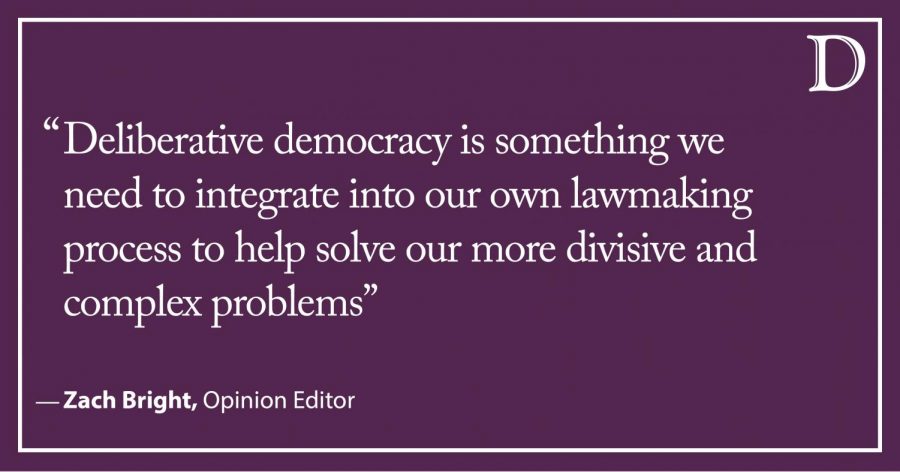 This is the first column in “Democracy Do-Over,” a weekly series exploring and making the case for improvements in how we elect public servants and ensure effective representation by all levels of government.

For almost a year now, I’ve been thinking about dyeing my hair. I’ve floated the idea by friends, casual and close, to get a sense of what people would think if I took the plunge. Talking about it gave me helpful information on colors to try, places that will do a good job, and whether or not it would actually look good.

In the end, I’ve decided that I’m probably not going to go through with it anytime soon. Just this weekend I helped a friend with her own, and until yesterday my hands made me look like I killed a Smurf. I’m not really sure if I could pull off a look like that.

Much more importantly, however, is that this instance highlights how people make decisions in their own lives. When we aren’t sure how to proceed when posed with a question or problem, we speak to people around us, gather information and synthesize their opinions to make our own decisions.

The idea of deliberative democracy rests on a very similar basis. This theory of government is something we need to integrate into our own lawmaking process to help solve our more divisive and complex problems.

Given its name, deliberation and discourse are key to the deliberative democracy’s foundation. It posits that government operates best when public conversation helps inform the policy decisions it makes. Actual face-to-face communication between people is more valuable than voting through paper ballots.

Avenues that facilitate this kind of deliberation already exists. For example, in the presidential party nomination process, states like Iowa and Nevada hold caucuses. Instead of simply bubbling in your choice on a slip of paper, decisions are made by speaking to other voters and explaining why you support your preferred presidential candidate in multiple conversations. The idea is that in making decisions, in this case who will lead your party’s ticket, you have to have a cogent case in mind.

In elections, this type of nominating process can have a big effect on the types of politicians who end up in office.

It also presents itself in the way some politicians choose to engage with their constituents. Some representatives hold town halls, be it out of a genuine desire to understand how their voters feel or out of the desire to appear accessible so they can get reelected. These forums provide accessibility to constituents to laud compliments or air grievances. While discussions like these are certainly worthwhile for people who want to be heard, the majority that attend are coming in with strong, hard-set political leanings. Similarly, because town halls only attract a sliver of a representative’s constituents, they can leave public servants with a polarized view of what voters want to see happen.

Harvard professor Jane Mansbridge — a strong proponent of deliberative democracy — makes the case for a substitute. Drawing on the judiciary’s use of randomized jurors to help make decisions on cases, Mansbridge advocates for the creation of citizen bodies by selecting citizens at random. These citizens would meet in person or virtually to have conversation that can be carried out for a variety of purposes

Beyond the town hall, citizen bodies can also be implemented to solve problems at a local level. In the same way a Parent-Teacher Association would meet and make decisions, like dedicating more funds toward the arts, a citizen body could meet and reach solutions to fix problems in their local area.

However, as with every structure within government, implementing deliberative democracy has its shortcomings. Sometimes citizen bodies don’t have all the knowledge and experience necessary to reach solutions to complicated, hot button issues. Moreover, some problems require decisive action that can only be made by an individual, and a citizen body is not that.

Yet this doesn’t mean that incorporating deliberative democracy is not worthwhile. It would be a helpful, engaging change from the status quo. Beyond all the policy accomplishments a more deliberative democracy would yield, it would inculcate a stronger sense of civic duty in voters. If it became the norm that you would have to participate in something like a citizen body, then more people would have the time and ability to become more aware of the issues the country faces and in touch with the processes working to solve it.

And when so many people feel disconnected and poorly represented by our current levels of government, this would open the door so people could better understand and influence the political systems that are meant to work for them. So whether you’re dyeing your hair or crafting public policy, being deliberative along the way is worth it.

Zach Bright is a Medill sophomore. He can be contacted at [email protected] The views expressed in this piece do not necessarily reflect the views of all staff members of The Daily Northwestern.