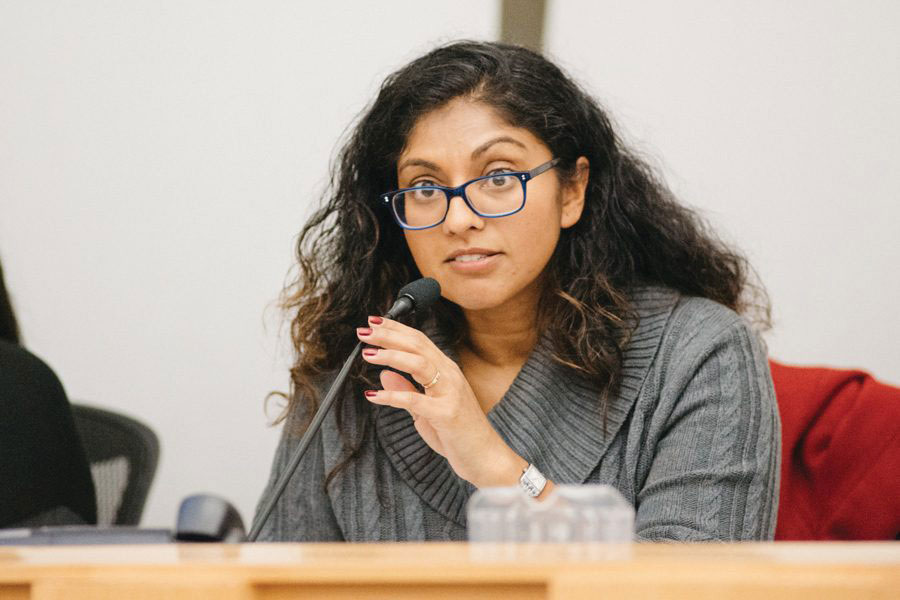 District 65 board president Suni Kartha. Kartha said school officials should consider the implications of the Achievement and Accountability Report on their own schools at Monday’s Evanston/Skokie District 65meeting.

Opportunity gaps continue to exist between black and white students, low-income and high-income students and students with and without Individualized Education Programs, according to data presented at Monday’s Evanston/Skokie District 65 meeting.

Kylie Klein, director of research, accountability and data, presented the district’s Accountability and Achievement Report for the 2018-2019 school year. Published each January, the report highlights students’ academic progress and identifies opportunities for improvement in District 65 schools.

“Three years ago, I reviewed my first District 65 Achievement and Accountability Report as a District 65 board member,” board member Anya Tanyavutti said. “I believe I used the word ‘demoralizing’ in relation to the outcome. To be honest, I felt similarly when reviewing the numbers that we see in tonight’s report.”

“I know they do not reflect the true aptitude of black children and families, and I personally know the pain of being underinvested in and underestimated, and subsequently internalizing wrong messages,” Tanyavutti said.

The report also noted a downward trend in kindergarten readiness, which is measured by the Illinois Snapshots of Early Literacy. The percent of kindergarten-ready students decreased by 11 percent in the two-year period between the 2016-2017 school year and the 2018-2019 school year. Klein said officials plan to analyze the factors driving the decrease in early literacy rates.

Some board members expressed concerns over the report’s perceived accessibility and lack of data analysis. Board member Biz Lindsay-Ryan said she hopes future reports explain which programs and policies may be driving changes in student performance. These explanations, she said, could direct school administrators choosing which strategies to pursue.

Others pointed out the need for qualitative data measurements and ISEL data separated into categories by race and socio-economic status, to see how the groups are specifically performing in contrast to the report’s current presentation of overall trends.

Board member Candance Chow said the report lacks data relevant to the board’s 2015-2019 Strategic Plan. One of the plan’s four goals is increasing the percent of students — both above and below college readiness benchmarks — who make expected gains in math and reading. Although the report includes math and reading data, it doesn’t indicate changes in performance levels for students who start below the college readiness benchmark.

She added that having data that measures the Strategic Plan’s progress is critical considering the appointment of a new superintendent. The board appointed Devon Horton as D65’s superintendent last December.

“I feel like that’s an important thing to continue through, especially as we have our new superintendent coming on and we’re going to be looking to reframe and rework that plan,” Chow said.

Board president Suni Kartha said principals and school officials should consider applying the report’s findings to their own schools.

In addition to illustrating several opportunity gaps, the data showed overall attendance rates have remained consistent across the three year timeframe, although chronic absenteeism increased by 1 percent between the 2017-2018 school year and the 2018-2019 school year.

New to the Achievement and Accountability Report are school profile reports — four-page overviews showcasing data specific to each District 65 elementary, middle and high school. The profiles break down school-level data by demographic group and socio-economic status, and information boxes define and contextualize metrics like “% meeting or exceeding college readiness benchmarks.”

The next board meeting is March 23 at 7 p.m. at the Joseph E. Hill Early Childhood Center.