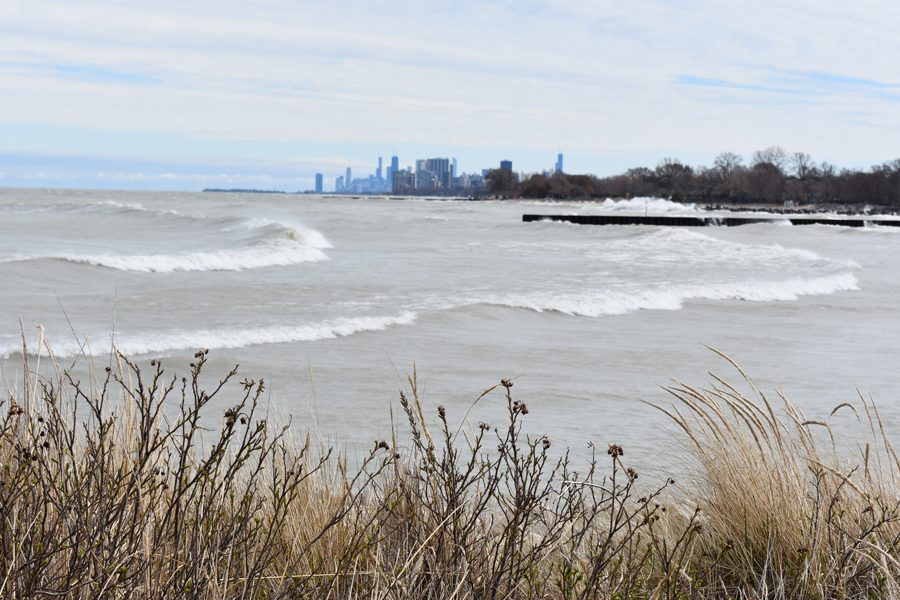 Lake Michigan. The lake has experienced some of the highest water levels on record, and the rising trend is expected to continue.

Lake Michigan water levels, some of the highest seen in years, pose a discernible public safety concern, according to several scientists and experts.

The lake levels, measured by the U.S. Army Corps of Engineers in conjunction with Lake Huron, have been on the rise since reaching a record low in 2013. In December, the lake reached an average daily mean of 581.52 feet, just short of 1986’s December maximum of 581.56 feet.

The six-month forecast predicts that the water levels could surpass the historic 1986 highs.

Lauren Fry, the technical lead for Great Lakes hydrology at the U.S. Army Corps of Engineers Detroit district office, said the past few years, with their abnormally wet seasons, have contributed to the high levels and created a period of lake level rise.

“Just by being at a higher water level at this point in time, which is a seasonal low period, now we’re looking at our forecast, and in that six-month forecast horizon Lake Michigan-Huron is projected to exceed its previously set record high water level each of the six months, so through June,” Fry said.

She added that the high levels are a basin-wide issue, not just a concern for Lake Michigan.

The high water levels have had a substantial impact on Chicago’s shoreline, from contributing to erosion to more dangerous wave action coming from the lake. Over the weekend, a winter storm caused serious flooding along Evanston’s lakefront, according to a tweet from the Evanston Police Department.

#LakeMichigan is drawing a lot of curious residents. Please be careful if you are going down by the lakefront, especially as daylight starts to fade. You wouldn’t want EPD and @EvanstonFD to come save you, we will but you wouldn’t want us to have to. Video location 800 Sheridan. pic.twitter.com/jSHrDMI2Dw

Steven Brown, the chief scientist of the Illinois State Geological Survey, said that lake levels have been relatively low for a few years, which has allowed Chicagoland residents to grow accustomed to living with a tamer lake.

Now, though, residents will have to re-adapt to changing water conditions.

“There is some reason to be concerned,” Brown said. “With high lake levels, that means the waves could possibly reach further onshore than people have been used to in the past. We’ve witnessed some really, really strong wave events… We just have to understand that there is a lot of energy in the waves, and with a high lake level walking the same place that you’re used to could pose more danger, even with a smaller wave.”

Evanston has suffered from the high water levels as well. The city closed its dog beach in 2018 due to the high water levels, which has yet to reopen. Evanston’s remaining beaches have also lost significant portions of their surface areas due to a creeping shoreline, according to Lawrence Hemingway, the director of parks, recreation and community services.

Hemingway also said the lake waters have started to destabilize the shore.

“The waves are just coming up higher on land, and they didn’t do that in the past when the water was lower,” Hemingway said.

Along with the increasing concern about public safety and shore integrity, scientists are still working on figuring out long-term causes of the rising trend. Lake Michigan has continually fluctuated in water levels, and the complicated interactions caused by issues such as climate change make the definitive cause difficult to pinpoint.

Even though climate change’s role in causing lake level rise is still watery, Katherine Braun, a research technician at ISGS and a current graduate student, has made a connection between lake erosion and carbon dioxide being released into the atmosphere.

She said that the wetlands around Lake Michigan act as carbon sinks, storing carbon and keeping it from being released into the atmosphere.

“When we’re losing this coastland into Lake Michigan, we’re not only losing that habitat, we’re losing all of the soil carbon that’s stored in that habitat,” Braun said. “It’s not necessarily that the carbon is going directly into the atmosphere once it’s been eroded, but that carbon is no longer in storage. It’s more free in the environment to follow a number of different pathways, one of which is being released into the atmosphere.”

As scientists look into different effects of the high lake levels, Chicago has begun to brace itself for a lake beating. The Chicago Department of Transportation, U.S. Army Corps of Engineers and Chicago Park District, for example, launched a shoreline protection project at Juneway Beach in Rogers Park that has begun to expand toward the South Side.

In Evanston, Hemingway said the city is putting together a plan for City Council consideration to deal with Lake Michigan water levels.

Braun noted that residents should be aware of this issue, even if they don’t own property on the lake, because they will be the ones paying for shoreline stabilization and other lake-related projects.

“The hard part is we forget about that because of time,” Brown said. “We take advantage of the times when we don’t have to be worried about (lake levels). People buy land, they develop things, it all happens and the lake comes back up again. In a lot of ways, that’s a policy issue, and what people are willing to pay for to live and be on the water.”