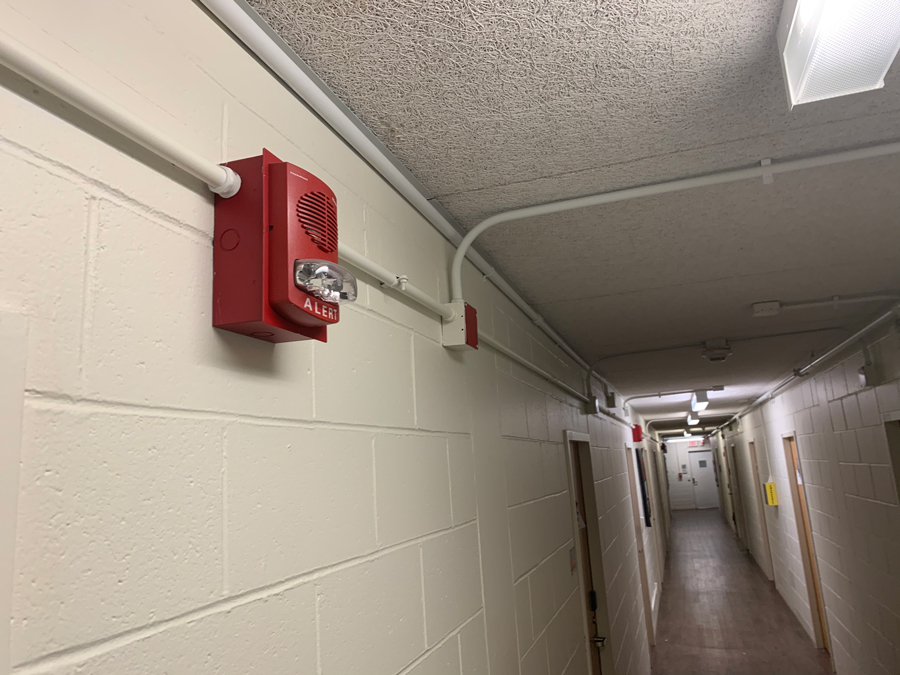 Fire alarm in Bobb-McCulloch Hall. Two false alarms were triggered in the span of three days, leaving 450 residents out in the cold.

All 450 residents of Bobb-McCulloch Hall were evacuated in below-freezing temperatures at approximately 12:50 a.m this past Wednesday — and then again on Saturday — due to two false fire alarms.

The first alarm occurred when someone discharged a fire extinguisher on the third floor. An investigation revealed there was no threat of a fire at the time. The chemicals inside the fire extinguisher exhaust created clouds of exhaust so thick that some residents said they could only see a few feet in front of while trying to evacuate the building.

Residential officials informed students it would take hours for the dorm to be cleaned of the fire extinguisher particles and residue. After residents stood outside in the 27-degree weather, some without any coats, they eventually were directed to the piano lounge and classroom of 560 Lincoln. Residents were allowed to re-enter the building at around 3:15 a.m.

“When the alarm goes off, especially in the middle of the night, students are awoken from sleep a lot of times, and they’re in a rush to get out of the building,” Hubinsky said. “In the evacuation process, there’s an increased risk for injury.”

Kayla Fortino, a McCulloch resident and McCormick freshman, said the extinguisher was discharged about three doors down from her room. She said she had to walk through the cloud of exhaust in order to evacuate. While leaving, Fortino said she inhaled the exhaust particles of the extinguisher, which left her sick and coughing for two hours.

“One of the guys on my hallway ran towards the door and I think he slipped on some of the fire extinguisher (residue) that was on the ground, and that caused me to breathe in really sharply because it surprised me,” Fortino said. “And that’s when I got the most of it in.”

The most common concerns heard from students were disruptions to sleep and classes the next day, Hubinsky said.

To accommodate educational disruptions, Hubinsky said the academic deans were notified of the event, and that students gathered in 560 Lincoln were verbally told to reach out individually to professors if they were having trouble attending class or completing an assignment. Fortino, however, said she did not recall being informed of these accommodations, and began her “normal day” later that morning, minus about four hours of sleep.

The City of Evanston’s False Alarm ordinance fines locations $110 for each false alarm after three instances, $330 after 10 and $550 after 25 within a calendar year, giving the residence hall one more false alarm before the University is fined.

Hubinsky said it’s not common at Northwestern to have repeated false alarms like this, and that his office has not decided who will incur the charge of the replaced fire extinguisher, nor the fine for any more false alarms.

The Office of Student Conduct, Residential Life and NUPD are all working together on an ongoing investigation of the incidents, Hubinsky said.

Although the Office of Student Conduct does not discuss ongoing investigations, Lucas Christain, Director of Student Conduct, said in an email to The Daily that “discharging a fire extinguisher and forcing a building to evacuate causes a serious disruption and can damage personal and university property.

“Removal from the residence halls and restitution for any damages may be considered as sanctions for this type of behavior,” Christain said. NUPD Commander Matt Wietbrock said his office has not made a decision yet whether to refer the incident to the state’s attorney’s office in addition to Student Affairs.

Students are encouraged to submit an anonymous report if they have any information about the incident.