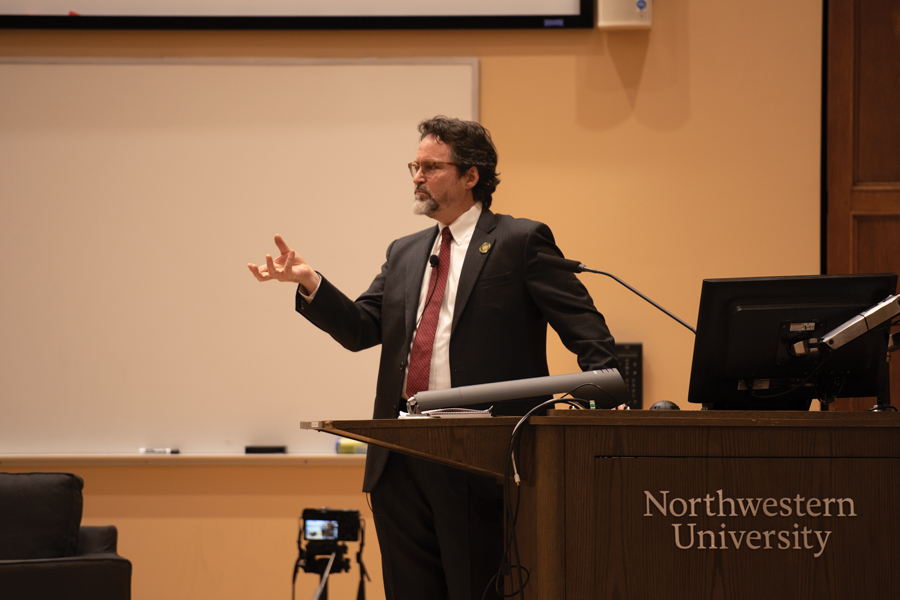 One of the country’s most influential Muslim scholars, Hamza Yusuf Hanson, spoke about his experiences studying the Islamic sciences with Mauritian scholars on Monday in Lutkin Hall.

Hanson is the president and co-founder of Zaytuna College in Berkeley, California, the first accredited Muslim liberal arts college in the United States. He is also currently on Secretary of State Mike Pompeo’s “Commission on Unalienable Rights,” which Hanson described as an “interesting experience.” The bipartisan commission’s role is to evaluate issues related to human rights.

Hanson began his talk by describing the history of Islamic expansion, later focusing on Mauritania, where most of his academia and scholarship took place.

The scholar said he was “the first Western person” to study in Mauritania, a country with a culture that Hanson said should be studied more.

“As somebody who’s been in it for over 35 years, the tradition itself is a very rich tradition, it’s an under-studied tradition,” Hanson said. “There’s always new things to study.”

The event was organized by the Northwestern Institute for the Study of Islamic Thought in Africa, the only research center in North America specifically devoted to the study of Islam in Africa.

Hanson has devoted over 35 years to studying Islam, a religion he said is unparalleled in terms of the close-knit community it creates.

Hanson’s discussion was part of a lecture series with the goal of inviting highly regarded Muslim scholars to campus, according to Zekeria Ahmed Salem, ISITA’s director and associate professor of political science at Northwestern.

Many in the audience came to see Hanson speak for the first time after following his scholarship online.

“I always see him online. It’s an honor to be here,” attendee Ali Al-Sahili said. “Because of his description and explanation of the education in Mauritania and how they do things there, it’s actually a fantasy of mine to be there and to learn from those teachers.”

Hanson’s lecture was followed by a question and answer session where audience members asked about a variety of topics, including his involvement with Pompeo’s human rights commission and previous comments about the Black Lives Matter movement.

In 2017, after he was asked if Muslim Americans should join the Black Lives Matter movement, Hanson said, “We have between 15,000 and 18,000 homicides per year. Fifty percent are black-on-black crime, literally … There are twice as many whites that have been shot by police, but nobody ever shows those videos.”

Hanson clarified his previous comment on Monday, saying it “was not related to Black Lives Matter. It was related to police, and it was taken out of context.”

Despite these controversies, Hanson still says that “religion should be a source of unity, not division.”