Golden: Northwestern women’s basketball has a chance to cement itself as one of the conference’s best 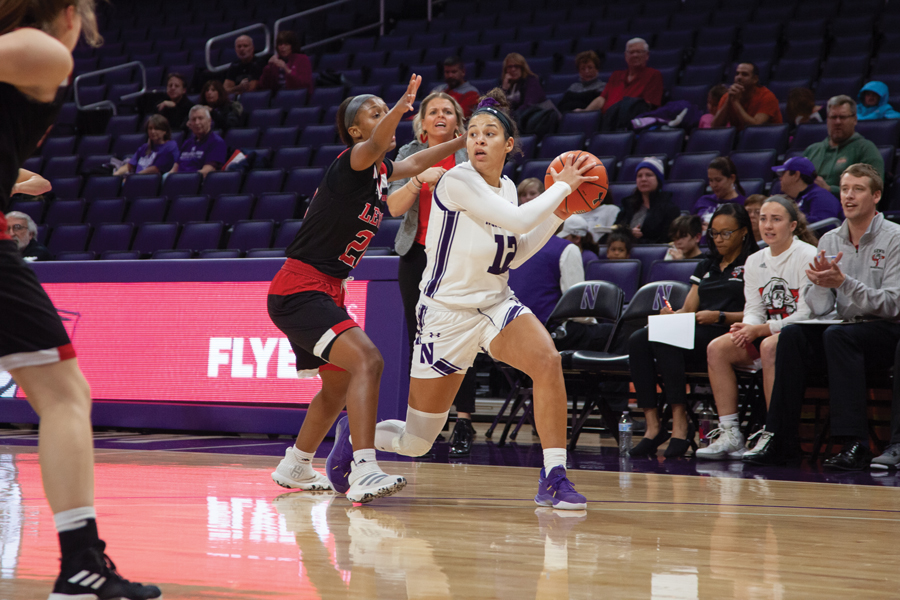 Veronica Burton dribbles the ball. Her play at guard has been one of the keys to NU’s fast start this season.

Northwestern fans were shocked on Monday when the AP Top 25 Poll was released and the Wildcats were still left out of the rankings despite winning both of their games this week.

While NU shouldn’t have to, if the Wildcats want to give further proof that they deserve to be ranked, that they are an NCAA Tournament team and that they represent the best of the conference, then the team has to win four of their next five games to make a bold statement.

In the midst of one of the best stretches in recent history, the Cats have already made bold statements so far this season: they’re sitting at 14-2 and at the top of the Big Ten with four top-50 RPI wins.

One of those wins came against then-No. 12 Maryland, who now has four losses and is ranked above NU at 20. They proved they can hang with the Terrapins and then-No. 16 DePaul, who were a few missed free throws away being upset by the Cats at Welsh-Ryan Arena.

But it’s not how you start, it’s how you finish. With a strong showing against some of the top-ranked teams in the Big Ten, NU could prove to the country that they deserve even more respect. Tournament-level teams don’t just have one signature win, they stack signature wins throughout the season — and now is the perfect opportunity.

Facing Indiana on the road would be the perfect start to this five-game stretch where the Cats will face two current top-25 teams and a third that was ranked last week. A win of this caliber would bolster NU’s resume and a lot of the team’s players have already played tough against Indiana before.

Last season, the Cats went on the road and pulled out a narrow six point victory against the Hoosiers, so playing in a hostile environment is something NU is used to. If they can come out of Bloomington with a win, the AP voters will have no choice but to put McKeown’s team in the top 25.

That is, unless the Cats slip up after such an important game against Indiana. Good teams sometimes play down to their competition, while great teams keep their foot on the gas and blow past beatable opponents.

Against Penn State and Michigan State, NU needs to assert its dominance and show the country that it can beat the teams that it’s supposed to beat.

Then comes the team’s biggest test when they face No. 20 Maryland on the road. Two weeks ago, they beat the Terrapins for the first time since Maryland joined the Big Ten. A second win would make this season even more special.

The Cats would finish this stretch against Michigan, who would also give NU a tough challenge at home. All in all, the Cats have a great opportunity to prove that they belong, despite the fact that the Associated Press doesn’t believe that at this point in time.

The snub, coupled with the fact that none of the players on the roster have ever played in an NCAA Tournament game, should give the Cats extra motivation to prove they are worthy over arguably their hardest stretch of the season.

NU has shown a lot of talent, but still has more to accomplish with half of the season left. But these next five games will be crucial in determining what kind of season the Cats will have. If NU can stack signature wins, Joe McKeown’s team could find themselves not only in the rankings, but in the tournament come March.

Andrew Golden is a Medill junior. He can be contacted at [email protected] If you would like to respond publicly to this column, send a Letter to the Editor to [email protected] The views expressed in this piece do not necessarily reflect the views of all staff members of The Daily Northwestern.