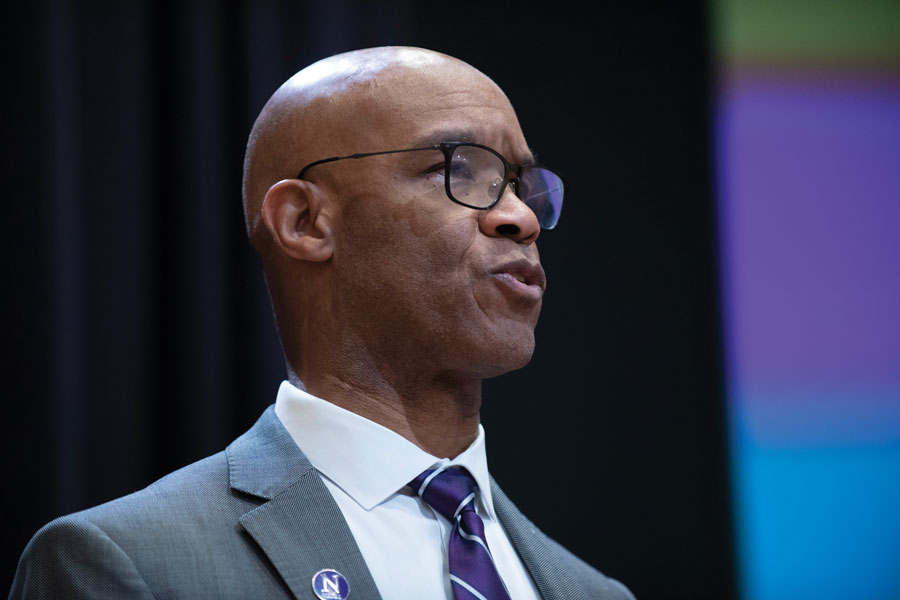 Medill Dean Charles Whitaker spoke about past challenges and future plans for the journalism school in the new decade.

This is the fifth article in a series called “2020 Vision” which walks through the reflections and hopes student groups, administrators and others throughout Northwestern have on the past few years and upcoming new decade.

Going into the new decade, Medill will focus on further developing multimedia and data visualization, expanding its internship opportunities, and preparing students for the ethical discussions in reporting, Medill Dean Charles Whitaker said.

Next year is Medill’s centennial, marking 100 years since its founding in 1921. Medill, Whitaker said, hopes to use the anniversary as a reminder the school is more than “a backward-looking institution that rests on its laurels.”

“I want us to be at the forefront of not just training bright journalists and marketers to enter the fields, but also helping to chart a course for what those fields are going to look like in the future,” Whitaker said.

In an interview with The Daily, Whitaker looked back on the challenges Medill has faced in the past year — ranging from the coverage of Jeff Sessions’ speech to protests in Hong Kong. He said the journalism school is looking forward to using these events as learning opportunities for the NU community.

In particular, following controversy surrounding covering the Sessions protests last fall, Whitaker said he and faculty members have done “some soul searching” into how they planned on adjusting the 201-1 journalism course.

Whitaker added that an expansion to the new curriculum is making sure that reporters who are covering a community they don’t belong to remain respectful, and that reporters speak to their sources before they “stick a mic” into their face. It is incumbent that faculty have “real conversations” with freshmen about how to undertake stories involving communities composed of marginalized identities, Whitaker said.

“I don’t think we talked enough about how to approach an interview, how to prepare for an interview other than, ‘Do background research,’” he said. “We don’t talk about the interpersonal aspects of doing reporting — probably not at all — but certainly not enough.”

Whitaker said Medill as an institution will focus more on being transparent in its journalistic process. The “episode with The Daily” showed the lack of media literacy that exists amongst the public, Whitaker said, and that is a “failing” on Medill’s part for not focusing on promoting media literacy enough.

In addition to improving media literacy, the dean said Medill is looking to expand its internship opportunities for students in the new decade. He said the options for international Journalism Residency trips will open up to include more U.S. and European sites in order to allocate more spots for students interested in reporting abroad.

The Medill Investigative Lab also underwent changes this year and will change again going into the new academic year, he said. The course, previously occurring for a single quarter, will now expand to two quarters and take place partially in Washington D.C. The first quarter would involve learning investigative reporting techniques, and the students could potentially apply to use the latter quarter to apply their newly-acquired skills in Washington D.C., crafting their own investigative pieces.

The decision to split up the class, Whitaker said, was made to “take some of the pressure off” of students so they would have more time to produce more publishable work at the end of the course.

This added quarter off-campus may create potential problems for students’ college plans. Whitaker said students now need to plan out the rest of their college career during their sophomore year, with opportunities like study abroad, Medill on the Hill, journalism residency, and now the two-quarter investigative journalism course taking up quarters of time.

“For students that want to do that, I don’t want them to feel as though they are somehow lesser beings or are missing something because they are taking advantage of all these experiences that they can sample one or two and be perfectly fine,” Whitaker said.

In accordance with the dean’s plans for the school, Medill students may expect changes in their courses, internship opportunities, and other aspects of their academic pursuits while at the journalism school.

“We’re moving on and that’s a good feeling, but again, we’re not resting on our laurels,” Whitaker said. ”There’s so much work to be done and we hope to continue doing that and advancing the cause. And again making sure that Medill’s luster isn’t dimmed during this period.”