“No Pants Subway Ride” turns heads on the CTA 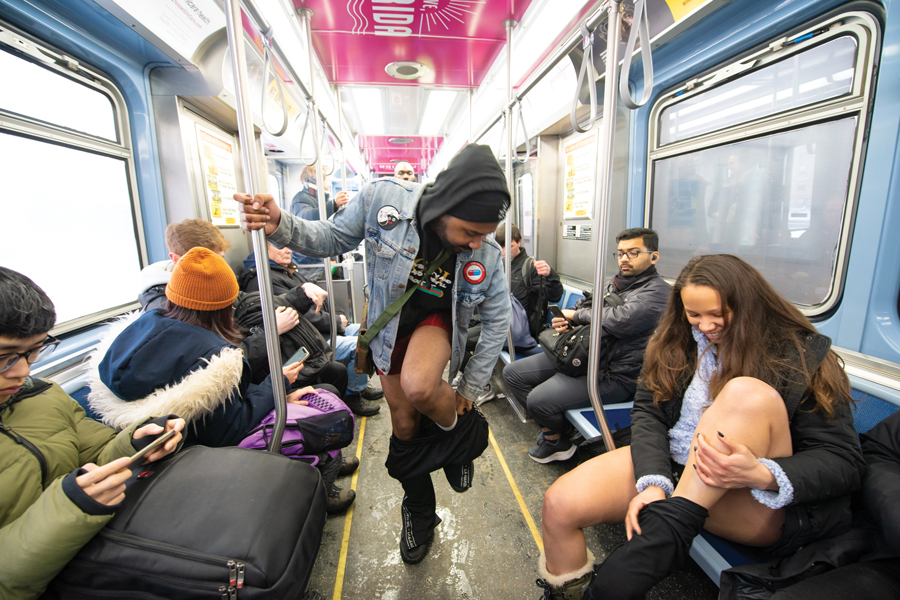 First-time participants remove their pants for Chicago’s 14th annual “No Pants Subway Ride.” The flash mob was created to promote silliness and spontaneity in everyday life.

The day after a winter storm slammed Chicago, some locals donned heavy winter coats and set out to shovel their driveways, but others chose to brave the elements on the CTA Red Line without the common comfort of pants.

They met up on the fourth floor of a Loyola University — Chicago parking garage. Some brought their kids, others brought GoPros. Some came alone. One of the event’s organizers, Steven Preston, shouted instructions through a megaphone.

“If you choose to be a jack—, don’t be surprised if you’re escorted out by CTA officials,” Preston said.

More of a flash mob than a protest, the goal of “No Pants Subway Ride” was to celebrate silliness and cause a laugh. Improv Everywhere, a New York City comedy group, launched the first pantless ride in 2002. That ride, in New York City, had just seven participants, but went viral when creator Charlie Todd put a video of the stunt on YouTube.

The tradition is now in its 19th year and has spread to cities all over the world. This was Chicago’s 14th annual ride. It was Preston’s sixth year leading the event, after taking over for his friend in 2014. He said the No Pants Subway Ride represents “freedom.”

After a quick briefing at the start of this year’s ride, the crowd of about 150 participants broke into separate squadrons to await their next instructions.

Detailed plans on small notecards broke down the strategy for the day: groups would begin on the Loyola platform, each assigned to a different car. Then, in pairs or trios, they would strip off their pants, stashing them in pockets or bags, and step out onto their assigned platform to wait for the next train.

The second train was where the magic happened.

At each stop, more pantless participants would board. They were instructed not to act out of the ordinary, keep a straight face, and enjoy the reactions along the way.

With the plan in place, they filed out of the parking garage and onto the Loyola platform. There was a slight delay due to a medical emergency, leading to a mass hold as the first train rolled through.

“No pantless riders get on this train,” the conductor said over the loudspeaker.

Olivia Carline was one of the first to strip. She rolled off her pants and stuffed them in a backpack before hopping out at the Granville stop. Carline, from New Zealand, said she was just in Chicago for a conference, so it happened to be “really good timing.”

Ruben Casillas, also pantless, got off at Granville with Carline. He said he decided to take the ride after seeing an ad for it on Facebook that same morning.

After warming up underneath the CTA heat lamps, the pair boarded the next train and did their best to keep a straight face.

Lauren, another participant did not give her last name, said this was her second year doing the ride.

“Why live in a big city if you’re not going to do stuff like this?” Lauren said. “All my friends think I’m crazy,” she said before returning to her book, “The Vagina Monologues” by Eve Ensler.

In the interest of acting naturally, many other riders also brought books to read. Others listened to music and snacked on Clif granola bars. Onlookers stole glances and stifled laughter, though a surprising number barely looked up from their phones, as if the group’s fashion decisions were perfectly mundane.

When the pantless riders reached the Roosevelt stop, their final destination, they launched a party on the platform. Participants danced to classics like “Baby Shark” and “YMCA,” and sang a heartfelt rendition of “Bohemian Rhapsody.”

Heipasia Hicks, a Chicago native who did not participate in the ride, looked on with a grin.

After the group had finished at Roosevelt, they got back on the Red Line and rode back to Loyola. By this point, the group of strangers had grown closer. They exchanged numbers and made plans to meet up again. They hugged each other before parting ways.

After the remaining participants exited at the Loyola stop for a Potbelly’s afterparty, an instant hush fell over the car.

The lively party had ended and the CTA was restored to its typical commuter silence.