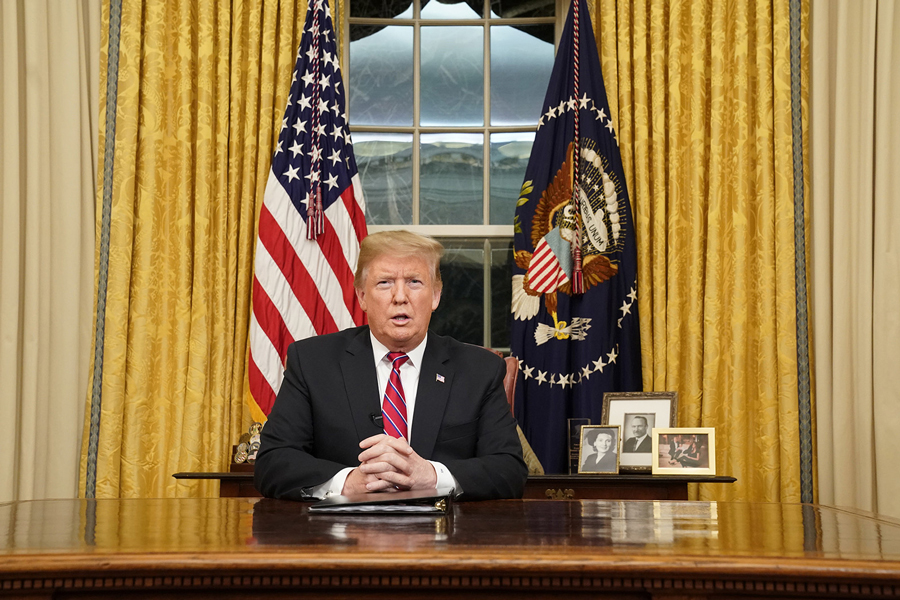 President Donald Trump speaks to the nation in January 2019 in a prime-time address from the Oval Office of the White House. Trump now faces impeachment charges, and awaits a Senate trial.

On Dec. 18, the impeachment inquiry reached its most recent climax as the U.S. House of Representatives voted to charge Trump with two articles of impeachment: abuse of power and obstruction of Congress. A Senate trial will be held in the near future.

When a CIA whistleblower report surfaced in September 2019 suggesting that Trump had acted improperly in a July 25 phone call with newly elected Ukrainian president Volodymyr Zelensky, many debated whether Trump’s actions warranted an impeachment inquiry.

According to Greg Andrus, a board member of the Democratic Party of Evanston, the impeachment inquiry surrounding the phone call and the decision to withhold military aid to Ukraine was warranted.

“Well, for the actions that he was impeached for, it was a rerun of the 2016 election,” Andrus said. “He’s soliciting help from foreign governments, in complete violation of U.S. law, in order to help himself in an election,”

However, many of the president’s defenders, including acting Chief of Staff Mick Mulvaney, have argued Trump’s actions were within the scope of routine diplomacy — a sentiment echoed by Blair Garber, the committeeman of the Evanston GOP.

“Even if he did tell Ukraine that, unless they did something about the corruption in their country and would withhold American foreign aid based on whether or not they had complied, that’s absolutely within the purview of the president’s duties,” Blair said.

Blair also said he believed the impeachment inquiry and the subsequent vote on articles of impeachment, which fell almost entirely along party lines, was a partisan process.

During the impeachment proceedings, Speaker of the House Nancy Pelosi caught many by surprise when she delayed sending articles of impeachment to the Senate, which are necessary to start the trial and would name the House impeachment managers, who serve as the prosecution. Citing the lack of clarity as to the fairness of Senate Majority Leader Mitch McConnell’s trial framework, Pelosi eventually ended the standoff with Republicans, promising to send the articles this week. McConnell has said he will coordinate with White House staff to run the impeachment proceedings, forsaking the idea of jury impartiality and essentially guaranteeing a Trump acquittal.

Rosie Rees and Kathleen Long, both co-leaders of Indivisible Evanston, said their membership was completely behind impeachment and the decision-making of Pelosi.

“Our membership is absolutely all for impeachment,” Long said. “We recognize that Nancy Pelosi is driving this whole thing and we are putting our faith in her decision making.”

Rees said not sending the articles of impeachment was “a great idea” because she was concerned there would not be a fair trial in the Senate.