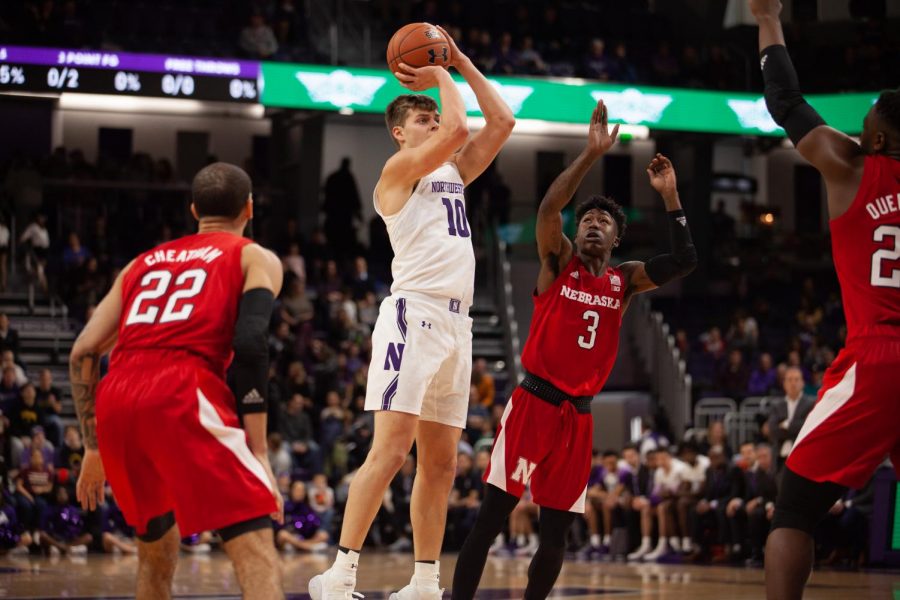 Miller Kopp shoots the ball. The sophomore finished the game with 15 points.

Northwestern can put one in the Big Ten win column.

After suffering their first 0-4 conference start in coach Chris Collins’ tenure, the Wildcats rode a high-scoring first-half effort to a 42-27 halftime lead and held on for their first Big Ten win, 62-57.

Both offenses struggled in the opening frame, with Northwestern connecting on just one shot in the opening four minutes and falling behind 7-2. The struggles wouldn’t last long.

Jump-started by two 3-point makes by Pat Spencer, the Wildcats caught fire offensively. The Cats’ picked apart the Nebraska defense on the perimeter and in the post, shooting a stunning 51.5 clip from the field in the first half. The stellar shooting helped the Cats take a 42-27 lead into halftime.

Northwestern’s offense went cold in the second half, connecting on just 26.7 percent from the field. Though the Cats held a 12-point lead as late as Nebraska put together a furious rally and cut the lead to three points with just under a minute remaining.

After Pete Nance’s 3-point attempt hit the rim, Nebraska had a chance to tie with 15 seconds left. Dachon Burke’s attempt to tie the game found the hands of Miller Kopp, who hit both of his free-throw attempts to seal the win.

1. The Cats heat up from behind the arc. After the offense stalled early on, the Wildcats caught fire from behind the three-point line and enjoyed their best offensive half of the season. Northwestern made eight of its 14 three-point attempts, with Miller Kopp, Pat Spencer, Beran, and AJ Turner each hitting a pair of treys. The long-range shooting helped space the floor, allowing the frontcourt to dominate inside and outscore the Cornhuskers 9-0 on second-half points. Nebraska couldn’t keep up, making just 31.3 percent of their field-goal attempts and 33 percent of their threes.

2. Welcome to the Robbie Beran show. During a 19-3 run that gave the Wildcats control of the game midway through the first half, the freshman forward knocked down two threes, dominated the inside glass with two offensive rebounds, and blocked an ill-fated Nebraska layup attempt. Miller Kopp and Pat Spencer also impressed, scoring 15 and 14 points, respectively.

3. The Wildcats closed it out. After blowing a double-digit second-half lead to Indiana on Wednesday, Collins lamented the Cats’ inability to close out tight games. Against Nebraska, the game seemed to follow a similar script. The offense couldn’t keep up its hot hand in the second half, hitting just two of 15 attempts from beyond the arc, and Nebraska took advantage. Cornhuskers guard Devin Mack made it a one-possession game with a three with 50 seconds remaining, but the Cats’ defense held strong in the final possession.