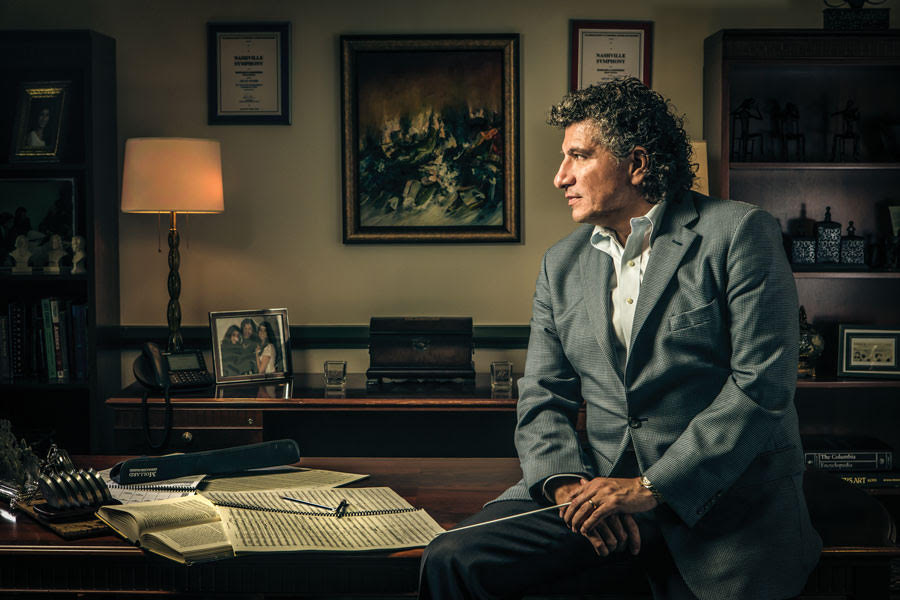 Giancarlo Guerrero. The Northwestern alum has won six grammys and was recently nominated for his ninth.

This is the first in a series of profiles of Northwestern alumni nominated at the 62nd annual Grammy Awards. Giancarlo Guerrero (Bienen MFA ‘92) is a six-time Grammy winner, and nine-time nominee, most famous for his work as the music director of the Nashville Symphony, a position he has held for 11 years. He has released several albums with the Symphony, primarily focusing on the work of modern American composers. He and the Symphony are nominated for Best Classical Compendium for their recording of a symphony by composer Jonathan Leshnoff. The Daily chatted with Guerrero about his work with the Symphony, and how he feels being nominated for another Grammy.

The Daily: How did you first develop your interest in classical music?
Guerrero: I was born in Nicaragua, and my family moved to Costa Rica in 1981, and I like to call them the meccas of classical music. I started music like most kids do. This was an after school activity, and a hobby. And little by little, this hobby became a passion, and now I’m truly honored and proud of the fact that I get to do my hobby for a living.

The Daily: You did your Master’s in Orchestral Conducting at Bienen. Can you tell me about your memories of your time there?
Guerrero: I’m very proud of the fact that I was a student of Victor Yampolsky, who’s still there running the orchestral music program. It was a wonderful place for me. I have great memories of my time in Chicago, not only attending school, but having the opportunity to hear the Chicago Symphony regularly and so many great concerts happening in that city. It was a big part of my education. I have nothing of great fun memories there, especially of the winters there. Coming from Costa Rica, that came as a bit of a shock. But Victor was a wonderful mentor. Very demanding, which in music you definitely need to have a teacher that’s not only going to be a great inspiration, but also prepare you for a great career in music. To this day, Victor and I have a wonderful friendship, and I still look up to him for advice and his thoughts.

The Daily: What work do you focus on with the Nashville Symphony?
Guerrero: A big part of any symphony orchestra is serving their own community, not just playing the old standards, classical warhorses. Not just looking to the past in terms of repertoire, but looking to the freshness of the future. Something that has given us great recognition and great pride is the fact that we have become the go-to orchestra when it comes to performing and commissioning and recording American living composers. And we focus on the United States because Nashville is “Music City,” and in many ways it’s “American Music City.” So we’re kind of doing the same thing that is happening around the community, as Nashville is a great center for bluegrass and rock and roll and country and jazz, but we happen to be doing it in our own field, which is classical music.

The Daily: Why do you think it’s important to give a spotlight to living creators?
Guerrero: I mean, you have to remember that Beethoven was new one point and that Mozart had world premieres. So this is nothing new. We have to continue evolving as an art form and giving a voice to the composers who are writing music in their own time. So, the most important ways to make this music still has relevance in our days. In the 21st century, the same things that made Beethoven write music or Mozart or anybody are pretty much the same things that are inspiring composers nowadays, whether it’s political, whether it’s emotional, whether it’s personal. We’re playing this music to have a deeper emotional connection to the audience and to have people understand that, like any great work of art, music is intended to send the message.

The Daily: Can you tell me a bit about what inspired you to record this compilation of Jonathan Leshnoff?
Guerrero: This was extra special because we commissioned the work for him as part of a bigger project called the Violins of Hope. This is a collection of violins rescued from the Holocaust, instruments that were brought by there owners to concentration camps all around Europe. We brought them to Nashville for an exhibit for about six months, and we commissioned a work from Mr. Leshnoff, where he would write this piece and we would showcase these instruments. And in this recording, about 25 of those instruments are played by the musicians of the Nashville Symphony. So it’s a way of connecting with the past and making music connect with history.

The Daily: Can you tell me a bit about the process of recording this album?
Guerrero: So all of our recordings in the Nashville Symphony, we record them live. A big part of it is we want to capture the energy of the audience. I mean, sometimes when you record in a studio setting, it’s a little bit colder. But the fact that the recording that you hear on is an actual performance, give you a greater sense of the energy of what happened there.

The Daily: This is your ninth Grammy nomination, and you’ve won six times with the Nashville Symphony. At this point, what’s your reaction when you get nominated?
Guerrero: It’s always exciting. It never gets old, it’s always nice to be recognized, especially at such a high degree and such a high level, especially with so many great recordings available. The fact that somehow this particular project received recognition is very important to us. So, that not only speaks to the sense of pride for the orchestra and for myself and for the musicians, but for the city itself. It shows there’s something very special happening in Nashville. So this is something that I promise you never gets old. And I’m hoping that I will add another Grammy to my to my collection. Each and every one of them is a reaffirmation of everything that we’re doing. And I promise you when I heard of the nomination, my heart was beating the same way that it was when I received my first nomination.

Unfortunately though, there’s something that has been the reality: I’ve never been able to go to the Grammys. Every single time when the Grammys take place, I’ve been working. At some point I want to walk the red carpet and pick up my statue, but unfortunately it hasn’t happened, and this year I will be on tour with my Orchestra, and there’s no way for me to separate from that.