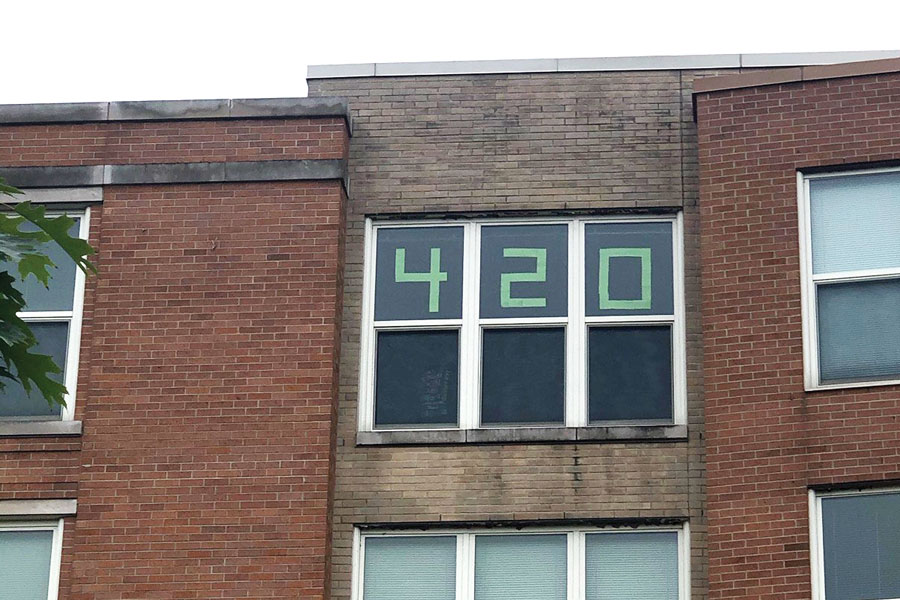 A 420 sign is on display from a window in Slivka Residential College. Following the legalization of recreational cannabis in Illinois, cannabis use among students on campus may be subject to change in the near future.

Although Illinois recently legalized cannabis, University administrators have continued to say they still prohibit the use and possession on campus.

Illinois became the 11th state to legalize recreational cannabis on Jan. 1, and cannabis sales generated $3.2 million on the first day. With over 77,000 purchases of cannabis-related products that day, cannabis in Illinois has been in high demand.

“I don’t think there are any plans to change the approach toward medical marijuana,” Figora said. “AccessibleNU has a process in place to work through any accommodation needs for students and so that’s the kind of home for those requests.”

Figora said the University is subject to federal laws, such as the Drug-Free Schools and Communities Act which requires a drug-free campus community.

“As long as the federal laws haven’t been changed with respect to the status of marijuana as an illicit drug, the University doesn’t have much flexibility in terms of the Drug-Free Schools and Communities Act,” Figora said. “And so, from that perspective, until there’s a federal law change, there’s not much the University would do in terms of its own policy changes.”

Legalization will not only affect adults over 21 in Illinois, but possibly also the use of cannabis among students on Northwestern’s campus.

Weinberg junior Calvin Alexander lives on campus in Foster-Walker Complex, and said he believes the use of cannabis among students will definitely be different at Northwestern now that recreational cannabis is legal, although he does not believe it will change significantly.

“You’ll see probably big changes over the next year or so, I would guess,” Alexander said. “I mean, it takes time for these things to really get ingrained in the whole culture in general.”

Alexander added that he thinks this new law will make cannabis use more prevalent on campus, as students who are already 21 can now go to a local dispensary to legally buy recreational cannabis.

Medill senior Will Kang, who lives off-campus, said cannabis use on campus will not change much because federal law still classifies cannabis as a schedule one narcotic.

“So campuses will probably remain the same,” Kang said. “I mean, it’ll probably be mostly off campus or very low-key.”