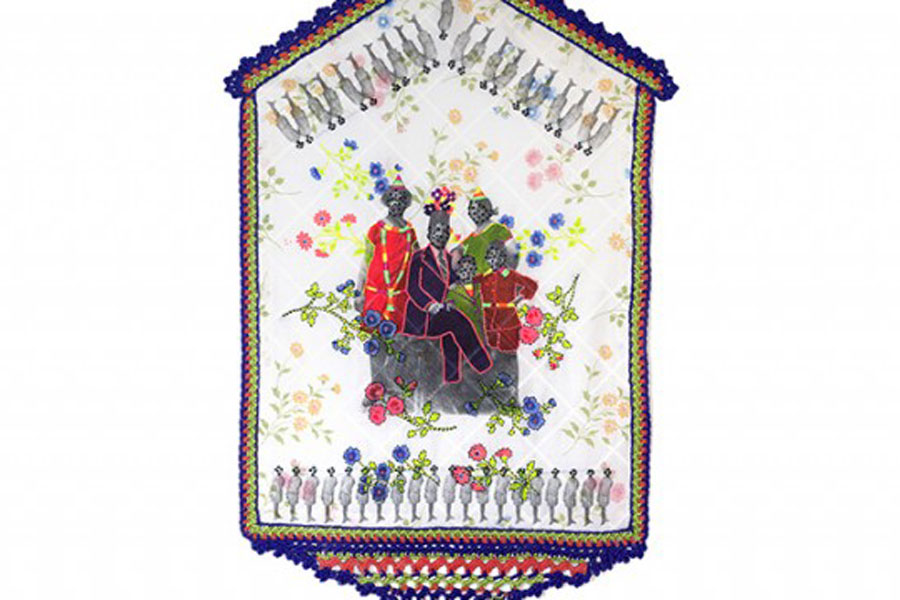 Artwork from “Oya: Borders of History.” The new art exhibition is scheduled to open Jan. 9.

Growing up in Turkey, Chicago-based artist Hale Ekinci was surrounded by the tradition of oya, lace trimmings that women use to accessorize their headscarves. Traditionally used by women to convey information to each other, they are a common style in her home country. When she was younger, her mother would wear a headscarf with oya whenever she cooked.

“You don’t even notice it,” Ekinci said. “It’s that present in everyday life.”

Ekinci is the artist behind “Oya: Borders of History,” a new exhibition at the Dittmar Gallery inspired by the tradition. “Borders of History” features family portraits constructed of fabric and decorated with embroidery and trimmings in the oya style.

According to a press release, the exhibition will open at the gallery on Jan. 9, with a reception taking place the next day.

“‘Oya: Borders of History,” explores transcultural communication and the translation of culture, identity, tradition and gendered labor in the Middle East,” the press release said.

Dittmar curator Karen Reyes said Ekinci’s exhibition was chosen after Dittmar released an open call for submissions. The Medill junior said she was drawn to the artist’s work because her fabric usage was something that hasn’t been featured Dittmar, and they felt it provided an interesting and new style for the gallery.

Reyes said another reason they chose Ekinci’s exhibition was her unique perspective as a Middle Eastern woman, and they wanted to feature work that dealt with the personal experiences of the artists. Ekinci’s work deals heavily with Middle Eastern and Turkish culture, and the gallery wants to expose Northwestern students to groups and cultures that are not traditionally given space in the art world.

“In any industry, there are always groups that are underrepresented,” Reyes said. “So it’s important to have work like hers because it’s not something you see when you walk into any art gallery.”

Ekinci said she enjoys exploring oya with her artwork because of the primary themes, communication and translation. Traditionally, oya trimmings and patterns could express things women couldn’t necessarily communicate verbally, like marriage problems. With “Borders of History,” she looks at how symbols and images from the Middle East translate across cultural lines, complemented by the use of oya in the artwork.

The exhibition features what Ekinci refers to as “embroidery paintings,” mostly posed family portraits, which she then embellished with embroideries and decorations. To finish these mixed-media pieces, Ekinci crocheted edgings on them as a replacement of traditional frames.

While a few of the families depicted in her artwork are her own relatives, Ekinci said she based some on her husband’s family from Indiana, mixing the American with the Turkish. Other family photos were taken from archival photos of immigrants in Chicago, in order to display the themes of immigration and diversity.

In working on the exhibition, Ekinci said she is interested to see how people relate to the families. Ekinci said that in previous exhibitions featuring her work, visitors would talk about how relatable the families are, and how universal they are. Once, she had a conversation with a girl who noticed that one painting’s pattern was identical to the pattern of grandparents bedsheets.

“I would like people to make connections to their own personal history,” Ekinci said. “But also how universal all the families are too, that it doesn’t really matter where you are from. That trans-cultural existence, that’s where my main focus is.”