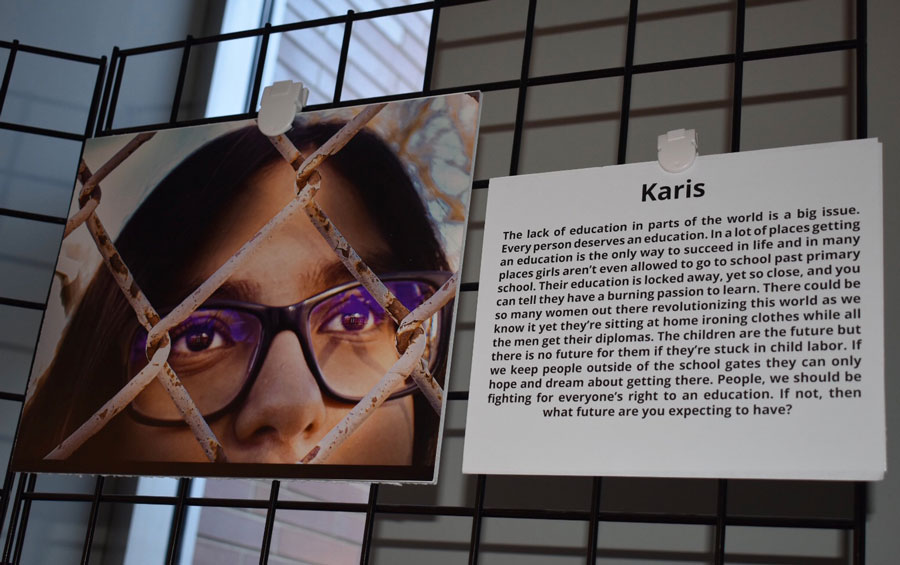 In the class, instructors encouraged students to engage with movements that inspired them.

“What Greta Thunberg has done in the last sixth months has made kids more aware of their voice and their position, and changed the way they view their own abilities,” Hughes said. “Now, they have a voice, they have a say in the way the business of life is conducted.”

Photovoice is a photography teaching method in schools and libraries focused on community representation. A nonprofit of the same name strives to share diverse perspectives and enact positive social change through photography.

Covode, who is trained in the photovoice method and introduced the idea to Chute Middle School in 2017, said hearing concerns from students has heightened her understanding of issues like climate change.

Kushner, Covode and Hughes worked with students on the project for two months, enabling them to approach issues through their personal and community contexts and to employ photographic techniques intentionally.

Students combined written, visual and audio elements to communicate their concerns and built live online portfolios to document their work. Kushner said the students gained empathy for the messages that were important to their peers when they shared their stories with each other.

“We had to peel layers back as the kids were writing artist statements, looking at photographers and thinking about how they wanted to approach it,” Kushner said. “We asked, how is that relevant in your life? And what’s your specific take on it?”

Eighth-grader Gabi Burnett’s piece focuses on violence against queer people of color. In the photograph, she stands against the pansexual color scheme — pink, yellow and blue — with a pansexual flag on her cheek and two x’s over her eyes.

Burnett said she hopes the Evanston audience will understand the frustration she expressed in her piece and stand up for individuals whose identities put them at risk.

“It was scary,” Burnett said. “But it’s time to be vulnerable, so other people will notice, and actually act on what you’re doing… I want to grow up to be an activist.”

EPL will host a reception celebrating the students’ work on Jan. 14. The exhibit, which currently stands on the library’s second-floor landing, will move to the new Robert Crown Center in February, and to the One River School in May.

Kushner said her class will update and expand the exhibit when it relocates next month.

“Now, I want to encourage them to say, what can we do about the problems?” Kushner said. “Beyond dialogue? How can we give people the tools to take action, and take action ourselves?”