Arts Alliance explores Dolly Parton classic ‘9 to 5: The Musical’ with #MeToo and ‘Time’s Up’ lens 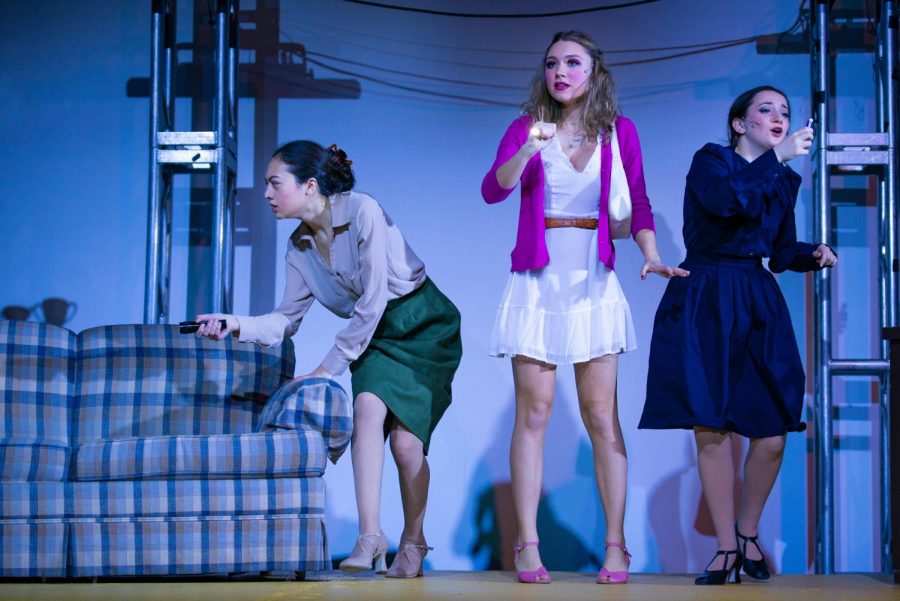 Actors rehearse in "9 to 5: The Musical." The musical, which follows three women plotting against their sexist boss in a 1970s workplace, opens this Thursday.

As a first-time director at Northwestern, Gaby Godínez wanted to put on a musical that combined whimsical, mindless fun with a political relevance that could bring the student body together. The clear choice was Dolly Parton’s “9 to 5: The Musical.”

“9 to 5” is a Tony Award-winning musical based on the 1980 film of the same name that ran on Broadway in 2009. The show explores how three female coworkers navigate the corporate world of the late 1970s and plot to overthrow their misogynistic, bigoted boss, featuring the music of country legend Dolly Parton. Arts Alliance’s “9 to 5: The Musical” opens Dec. 5 in McCormick Auditorium, and closes Dec. 7 after five performances.

Producer Noah Kudman, a Communication senior, said it was very important to him and Godínez that they tell a women-centric story. As one of the only musical slots produced by a board in Northwestern’s Student Theatre Coalition, Kudman said that the scale of “9 to 5” was much bigger than other shows he’s produced and altogether a “wild ride.” Kudman also said this slot meant a lot to him because it’s the first StuCo musical that freshmen can get involved in.

“It’s one of the biggest shows that happens on campus, but at the same time it’s so exciting because this show brings in a lot of freshmen to the team,” Kudman said. “It was really awesome guiding them through the process of working on a show.”

Communication sophomore Jenna Sage Howard-Delman said she was excited to be in an Arts Alliance production because she saw the board’s production of ‘Carrie’ last fall and was impressed by the quality of the show. Howard-Delman plays Judy, one of the lead characters in the show — a newly divorced young woman who realizes for the first time what it means to be a woman in the changing political landscape and second-wave feminism of the 1970s.

“I think what’s going to resonate with the audience is (Judy’s) path of finding autonomy, and her discovery that she has never had autonomy in any relationships in her life — she’s never been her own person,” Howard-Delman said.

Godínez, a Communication junior, said “9 to 5” took on a new meaning to her because of its themes relating to the #MeToo and Time’s Up movements despite putting on the show 40 years after the movie’s inception.

On Monday, the “9 to 5” team and Arts Alliance hosted a special event called “Time’s Up: A Coffee Roast” at The Rock where they sold sweaters, coffee, and the chance for students to anonymously roast someone who tried to stifle their voices. Someone working at the Rock would shout each of the roasts through a bullhorn, which Godínez said channels the atmosphere of a scene in the show when the three leads talk about the ways they can get rid of the men in their life.

“We raised over $200, and all the money went to the Time’s Up Legal Defense Fund which specifically fights for people in the workplace,” Godínez said.