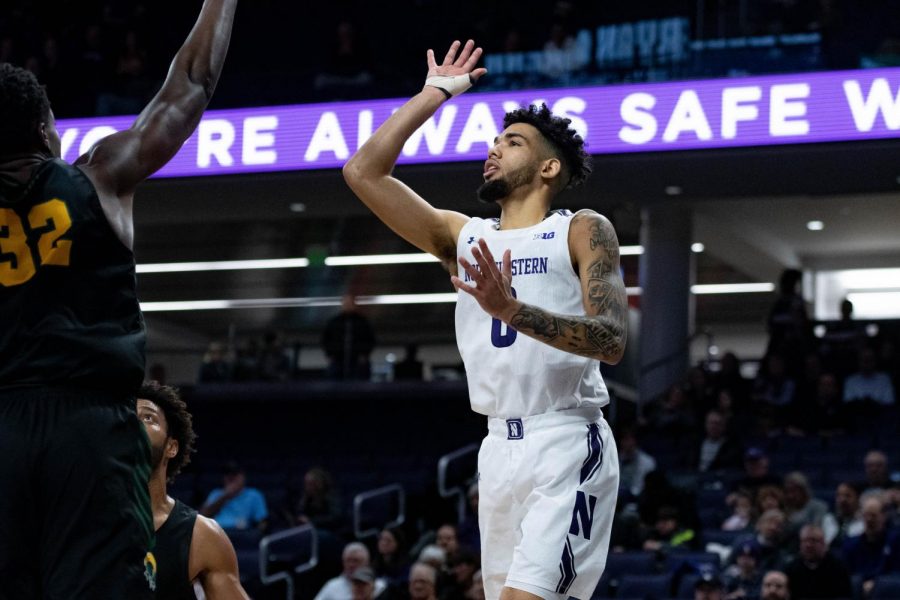 Boo Buie puts up a floater. The freshman guard had a career-high 20 points on Tuesday.

With 14:35 remaining in the second half, graduate transfer guard Pat Spencer dunked for his first points of the game. For a team that has relied on Spencer to score frequently through the first six games, that stat typically wouldn’t have been a good sign for Northwestern.

But with the talented guard struggling to score from the field, coach Chris Collins looked to its young stars to play like veterans — and they did just that.

Behind the career-best shooting of sophomore forward Miller Kopp and freshman Boo Buie, NU (4-3) was able to take advantage of first half runs to build a sizable lead en route to an 82-64 victory against Boston College (4-5).

“I just got open shots,” Kopp said. “My teammates found me open in transition. We did a good job of sharing the ball… Credit to my teammates — they found me, and I knocked them down.”

Less than four minutes into the game, Collins subbed in Buie for Spencer, who played just eight minutes in the first half. Buie took advantage of his opportunity, making two of his first three shots. The teams traded baskets for the first ten minutes of the game, with the Eagles holding a three-point lead at the media timeout.

Out of the timeout, the Cats went on a run and never looked back. Over the next six minutes, NU outscored Boston College 18-2 and got contributions from a variety of players on the team. During the stretch, six different Northwestern players scored, including five underclassmen and junior guard Anthony Gaines.

By the end of the first half, Kopp led the team with 13 points and Buie followed with nine to pace the Cats. The second half was more of the same for both as Kopp scored seven of NU’s first nine points to keep the Cats firmly ahead in the second half.

Buie was on fire in the second 20 minutes and didn’t miss, making all five of his shots including a three pointer. The freshman guard finished the game 8-for-9, with his lone miss coming in the middle of the first half.

After two free throws from senior forward A.J. Turner, who played at Boston College, NU’s lead stretched to 20 points. However, the Eagles went on a 8-0 run to put the score at 62-50 with under eight minutes left.

But just when it seemed like the Eagles were seizing the momentum, Buie came through again. Out of the timeout, he hit a shot to halt the Boston College run and put NU’s lead out of reach.

“Pat struggled a little bit tonight. He had played so well and almost carried us in Florida, and that’s what happens during the course of the year,” Collins said. “To have a guy like Boo come in and give us great minutes and kinda carry the load for us at that end was huge.”

Aside from Buie and Kopp, who scored 20 each, freshman center Ryan Young added 12 points, Gaines hit all four of his shots and sophomore forward Pete Nance added eight points.

With three minutes left, the Cats’ rotation on the floor wasn’t a mix of experienced veterans. Instead, the rotation was primarily underclassmen — Buie, Kopp, Nance and Young — along with Turner.

For NU, this season will be all about growth for its underclassmen. And Tuesday showed how much they’ve grown from the first game of the season to now and how much potential the young players have moving forward.

“You come on the road, and you win in a road environment, hopefully, it’s a confidence builder,” Collins said. “When you’ve done it, it gives you the belief that you can do it again.”