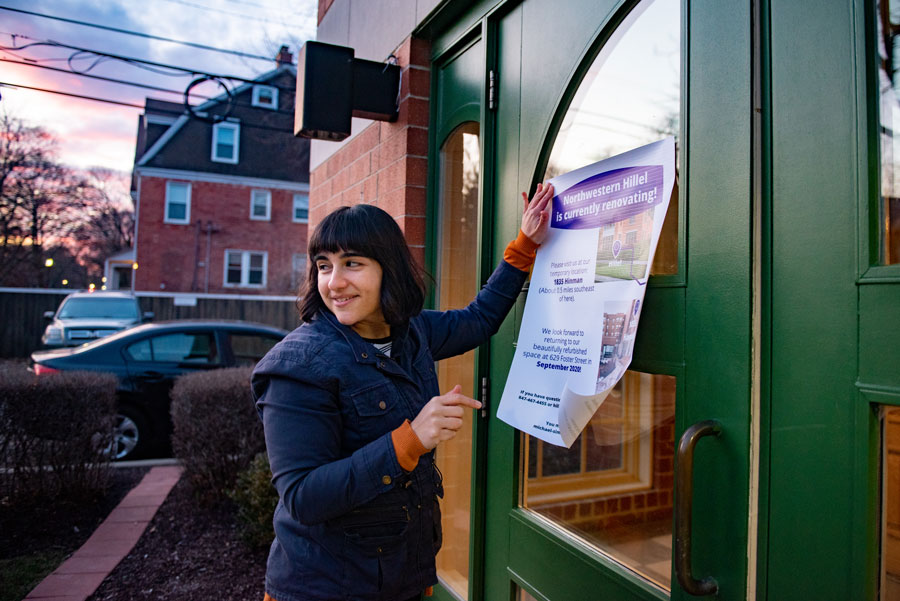 Rebecca Haas puts up a sign at Hillel’s 629 Foster St. building announcing its temporary relocation to 1835 Hinman amid renovations.

Though renovations are underway, Hillel will continue its tradition of hosting “Latkepalooza,” its annual Hanukkah celebration, during reading week. Tonight, Dec. 4, students will gather in Unicorn Cafe from 6:30 pm to 8:30 pm to celebrate Hanukkah early.

On Nov. 15, Northwestern’s Fiedler Hillel closed for renovation its 629 Foster St. building, with plans to re-open in September 2020. During the renovations, Hillel is temporarily located at 1835 Hinman.

“The idea is to have a place for students to come together and take a break from studying — to (celebrate) Hanukkah with people around you and the people you care about in your community, even though it isn’t for another three weeks,” Haas said.

Hillel campus Rabbi Brandon Bernstein said the timing of the renovations is interesting because of its proximity to Hanukkah, given the holiday’s etymology and significance to the Jewish people.

The word “Hanukkah” literally means “dedication” and “renewal” because the holiday is a festival celebrating Jewish rebels who fought to protect the Second Jewish Temple in Jerusalem. The temple was the holiest spot for the Jewish people, and after its destruction, the Jewish people rededicated the space by lighting the flame of the menorah with oil that lasted eight nights — which is where the modern tradition of lighting a menorah for all eight nights of Hanukkah comes from.

“So much about what’s happening with Hanukkah is about dedicating space,” Bernstein said. “I think that one of the ways that we should celebrate Hanukkah on campus is by dedicating 1835 Hinman as Hillel’s space for the rest of the academic year.”

The Fiedler Hillel building was built in the late 1990s and has since been the center of Jewish life on Northwestern’s campus. However, in recent years, its staff noticed the building’s layout had difficulty accommodating programming and student groups, said Executive Director Michael Simon. Thanks to a $2 million donation by Northwestern parents Abel and Judy Friedman, the Hillel staff established a plan to completely remodel the building’s interior.

Simon said that the building’s first floor, where weekly Shabbat dinners are held, will feature retractable walls and moving doors in order to make the space more flexible. Hillel is also home to weekly challah bakes and is a practice space for the Jewish Theatre Ensemble and the a cappella group ShireiNU. They found those spaces hard to manage due to the restrictive layout of the building, Simon said.

“We’ve been growing over the years with our programming and there are times where there’s just not enough space,” Simon said.

SESP senior and Hillel student president Abigail Shay said that Hillel’s function on Northwestern’s campus has changed a lot throughout her four years. From new positions on the student executive board to wider student engagement initiatives, Hillel has greatly expanded to make Jewish students feel welcomed, Shay said, and the renovations will continue that work.

“I’m excited about being out of the building,” Shay said. “It gives us an opportunity to go into spaces that we’re not normally in.”