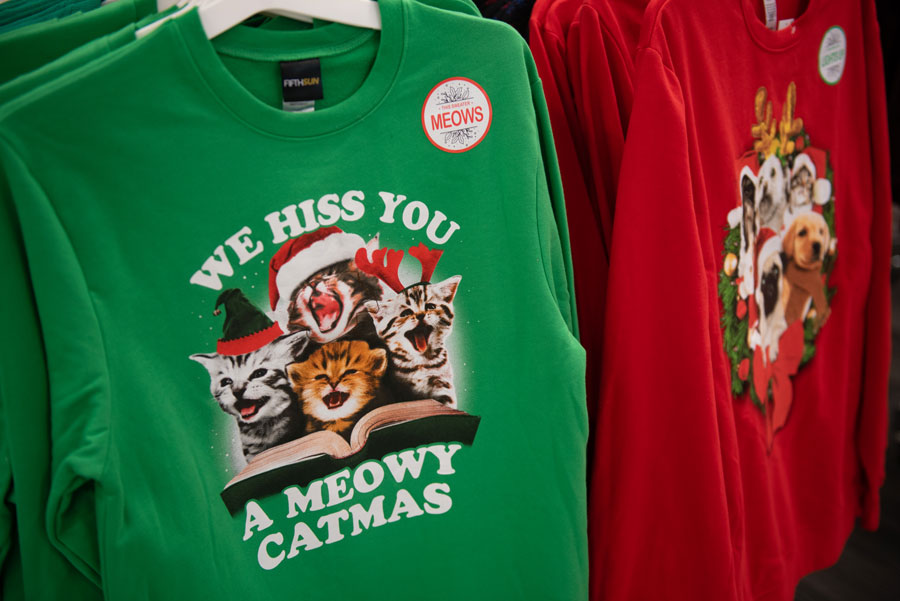 You might think a sweater with an elf lifting a barbell underneath the words “Merry Liftmas” is ugly, and you’d be right. But if you buy it at Northwestern GlobeMed’s annual ugly sweater sale, it’s not just a tacky outfit for your family Christmas party — it’s an act of charity.

Every year, Northwestern’s chapter of GlobeMed, a national organization dedicated to fundraising for global health initiatives, runs an ugly holiday sweater sale the week before Thanksgiving. The event takes place in the front lobby of Norris University Center, where the group sells sweaters off the rack for prices ranging from $15 to around $30. This year’s drive ran from Nov. 18 to Nov. 22, between 9 a.m. and 4:30 p.m. every day.

The profits from the event go directly to GlobeMed’s partner organization, the Adonai Child Development Centre, an orphanage and health care clinic in Namugoga, Uganda. The money GlobeMed raises for the clinic is intended to help fund projects and expansion for the facilities.

GlobeMed co-president Millie Culbertson said the drive is the biggest fundraiser the group does. GlobeMed regularly sells out of sweaters every sale and raises over $7,000 each year. The amount this year has yet to be tallied.

“It’s fun because it’s starting to be holiday time,” the Weinberg senior said. “It’s almost winter break, (and) it’s starting to get cold out, so people genuinely need sweaters. People like to wear them to holiday parties during reading week.”

Culbertson said the campaigns team for GlobeMed works months in advance to organize multiple trips around Chicago to purchase sweaters from thrift stores. GlobeMed purchases roughly 3,000 sweaters from the various sites each year.

GlobeMed general member Charlotte Brightbill said the group tries to be fairly deliberate with the sweaters it buys, aiming to find fun and creative ones. For example, one of the sweaters they bought this year depicts Santa Claus as a lobster named “Santa Claws.”

Culbertson said the group works to make sure that the sweaters represent a variety of different cultures and holidays, so the selections will appeal to everyone on campus. In addition to Christmas sweaters, GlobeMed also sells Hanukkah and Kwanzaa sweaters. Several sweaters also include creative decorations and technology, including a sweater covered with flashing Christmas lights that are based on the TV show “Stranger Things.”

GlobeMed members love the event, Culbertson said. Almost all of the members chip in to help collect or sell the sweaters, and many purchase a sweater from the sale for themselves. During reading week, the club throws a holiday party where they all wear their sweaters.

Culbertson said the event offers an opportunity to spread the word about what GlobeMed does.

“We try to tell people what they’re actually giving money toward,” Culbertson said. “Making sure they know what Adonai is and everything about where their money is going, so it’s not just a fun sale for GlobeMed.”