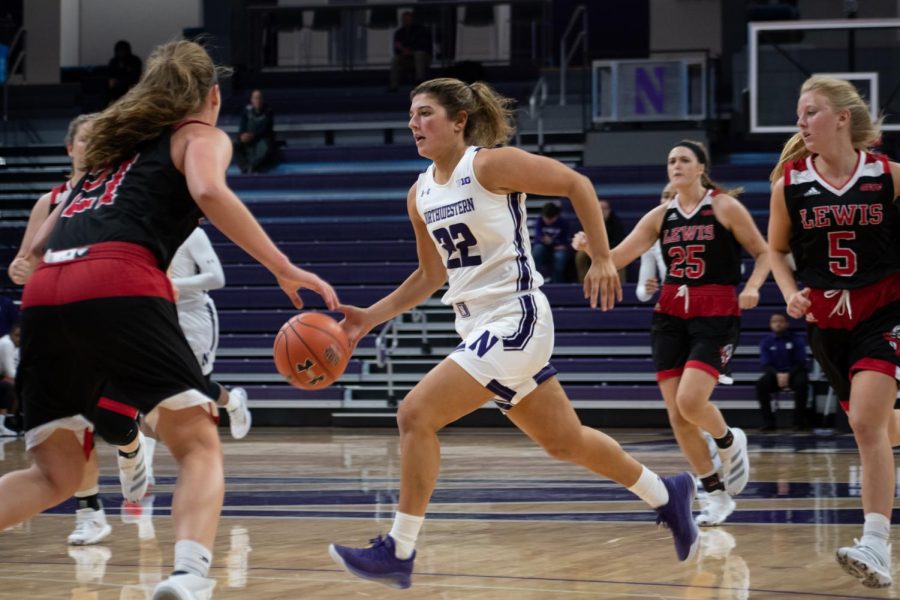 Byrdy Galernik dribbles the ball. The senior guard has become Northwestern's top scorer off the bench.

At the beginning of the season, it looked like senior guard Byrdy Galernik would be a bench player for Northwestern. She played a combined 18 minutes in the first three games, scoring only two points and dishing out one assist.

But in the last three games, Galernik’s role and production have increased for the Wildcats (5-1). After two solid performances against Valparaiso and Colgate, Galernik had a career day in Sunday’s 70-68 loss to DePaul at Welsh-Ryan Arena.

The Toledo, Ohio native scored a career-high 16 points in just 16 minutes off the bench, shooting 6-for-8 from the field while adding two assists.

She started her with scoring with three straight jumpers, including two half-floaters in the lane that look to be her bread-and-butter, at the start of the second quarter. The senior also nailed a 3-pointer at the end of the quarter to cut the Blue Demons’ (6-1) lead to one point before halftime.

“I felt like I was in a groove…but I never want to force it,” Galernik said. “I just want to play in the rhythm of the game. If my shots open, I’m gonna take it but I’m still looking to get my teammates involved.”

The Cats started the third quarter in a funk, falling down 50-42, but then NU — with the help of Galernik — turned it around. The Cats went on an 11-2 run to end the period, with Galernik scoring the last seven points. The exclamation point was a second-chance layup as time expired that gave the NU a one-point lead heading into the fourth.

Galernik spent most of the fourth quarter on the bench as McKeown played sophomore guard Sydney Wood for defensive purposes. But Galernik was subbed in near the end for her offensive prowess, despite not factoring in on the final few possessions.

“She has this instant offense mentality — can really score the ball,” McKeown said. “We saw that tonight and that’ll be a great weapon for us all year.”

McKeown added Galernik has had an up-and-down career, but her hard work is paying off and she has the potential to have a large impact on the team this year.

Junior guard Jordan Hamilton, a two-year starter in the backcourt, didn’t play Sunday — she’s missed four of the six games this season — and her health going forward is unknown. In her absence, Wood has taken over in the starting lineup, and has played well in her new role. But if Galernik can keep up her production, it would be a big boost for a team that relies so heavily on its starting five.

Senior forward Abi Scheid — who is roommates with Galernik — said it’s great to see her teammate play so well.

“That’s my girl,” Scheid said. “It’s always fun to play with her when she’s shooting, give her a few assists. I’m proud of her. She puts in a lot of work so it’s paid off.”