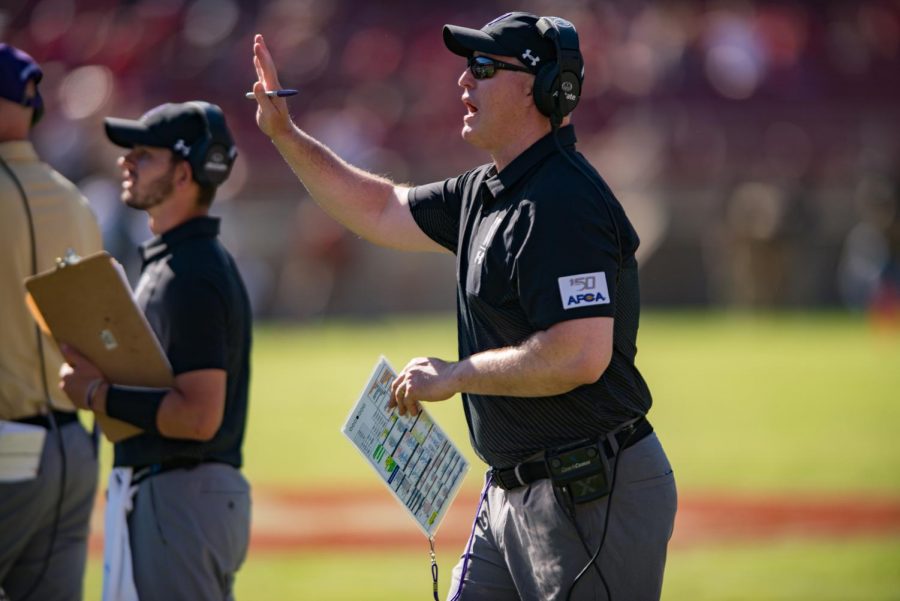 Pat Fitzgerald calls over his players. Fitzgerald will need to hire a new offensive coordinator and quarterbacks coach this offseason.

Northwestern’s quarterbacks had less help last season than any other signal caller in the Big Ten.

Not because of the inexperienced group of wide receivers, or the injury plagued running backs. But Hunter Johnson, Aidan Smith and Andrew Marty got less coaching than any other quarterback in the conference.

And I’m not just talking about Mick McCall.

McCall was the only coach at NU designated to work with the quarterbacks. The task of doing both proved to be too difficult as he was fired Sunday after the offense finished No. 122 in the nation and the quarterbacks combined to throw six touchdowns and 15 interceptions.

Coach Pat Fitzgerald has already said fixing the quarterback room will be the team’s biggest priority in the offseason, and hiring the next offensive coordinator is the first move to be made. But why hire just one person to fix such a big problem?

For the first time with Fitzgerald as the head coach, NU needs to hire an offensive coordinator and a separate quarterbacks coach.

McCall has filled both of these roles since he was hired in 2008, and before that, Garrick McGee ran both the offense and the quarterback room for two years. But two heads are better than one.

If the Cats want to compete with teams like this, they need to allocate as many resources as possible into the position they need to improve the most. At the very least, NU should have multiple coaches who know more about the most important position in the sport.

Last season, McCall was the only coach with the Cats who had ever worked directly with an FBS quarterback or even had played the position. Running backs coach Lou Ayeni came to NU after working as the running game coordinator at Iowa State, and he’s spent his entire coaching career focusing on that aspect of the game.

If Fitzgerald redesigns his coaching staff to open a spot for a quarterbacks coach, that means another assistant has to leave as well. Heffner is the most likely assistant to go. McCall was the coach who brought the superback position to college football, but without him in the fold, the future of the position is up in the air.

Anderson has experience coaching tight ends at Indiana State and Eastern Michigan and could likely take over Heffner’s responsibilities. That’s a small sacrifice to make to ensure that the quarterbacks have a full-time assistant.

Down the stretch of the Cats’ 2019 season, it was clear that Johnson, Smith and Marty needed more help. Since NU hasn’t added any high-impact grad transfer at receiver or running back recently and likely won’t break that trend this offseason, the best possible present for the three returning quarterbacks would be better coaching.

So why hire just one coach to help them when you can hire two?

The quarterbacks need the most attention, so give them a coach whose focus won’t be diluted. Ideally, the coordinator and quarterbacks coach will make sure NU doesn’t have the fifth-worst scoring offense in the FBS again this season.

As a former linebacker and linebackers coach, Fitzgerald never had to lead an offense. Now he has the chance to add two staffers with experience doing that.

It’s time he reorganize his coaching staff to match the rest of the Big Ten.The careers of Hunter Johnson, Aidan Smith and Andrew Marty are all depending on it.

So is the success of the program.

Charlie Goldsmith is a Medill junior. He can be contacted at [email protected] The views expressed in this piece do not necessarily reflect the views of all staff members of The Daily Northwestern.