Football: Offensive coordinator Mick McCall will not return in 2020 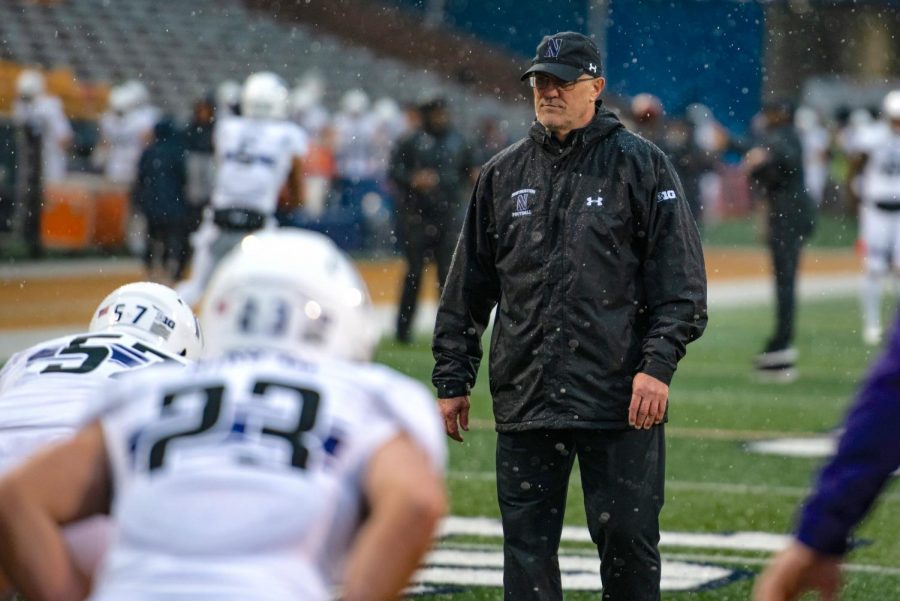 Mick McCall watches Northwestern warmup before the Illinois game on Nov. 30. McCall will not return to Northwestern for the 2020 season.

Earlier in November, coach Pat Fitzgerald promised there would be changes in the quarterback room.

Those changes started with the coach who had been running the offense for 12 seasons.

Northwestern announced Sunday afternoon that offensive coordinator and quarterbacks coach Mick McCall would not return for the 2020 season.

“I’m proud of what we accomplished at Northwestern, and the success I’ve contributed to throughout my career,” McCall said in a statement. “It’s been a privilege to represent this University and work alongside some of the best student-athletes, coaches and staff I’ve encountered in my career.”

The Wildcats (3-9) finished the season with the fourth-worst scoring offense in the country and had only 23 touchdowns all season. Sophomore transfer quarterback Hunter Johnson –– who started the season with extremely high expectations after transferring to NU from Clemson –– finished the year with just one touchdown and four interceptions.

According to Fitzgerald, it took awhile for Johnson to pick up McCall’s offense, and Johnson was one of four quarterbacks who played meaningful reps for the Cats this season. Whether it was Johnson, T.J. Green, Aidan Smith or Andrew Marty under center, NU lacked a viable passing attack all season. The Cats averaged just 117 passing yards a game.

The NU coaching staff has been known for its stability, but that is beginning to change. From 2010-2017, there were no coaching changes. That changed after the 2017 season when former defensive backs coach Jerry Brown retired and former linebackers coach Randy Bates was hired by Pittsburgh to be it’s defensive coordinator. There was more turnover last winter when former offensive line coach Adam Cushing accepted the head coaching job at Eastern Illinois.

Now the Cats will begin to look for McCall’s replacement, who will be tasked with turning around an ineffective offense. NU will return almost all of its starters on that side of the ball, with the exception of center Jared Thomas and receiver Bennett Skowronek.

“Mick was one of the first hires I made when I was given the honor of leading this program and has been a trusted colleague and loyal friend for almost my entire tenure,” Fitzgerald said in a statement. “He’s guided our offense through unquestionably one of the most successful periods in Wildcats history, with four bvowl championships and nine postseason appearances. Mick recruited and coached great student athletes and exceptional young men who have made the Northwestern community proud in so many ways after graduation.”