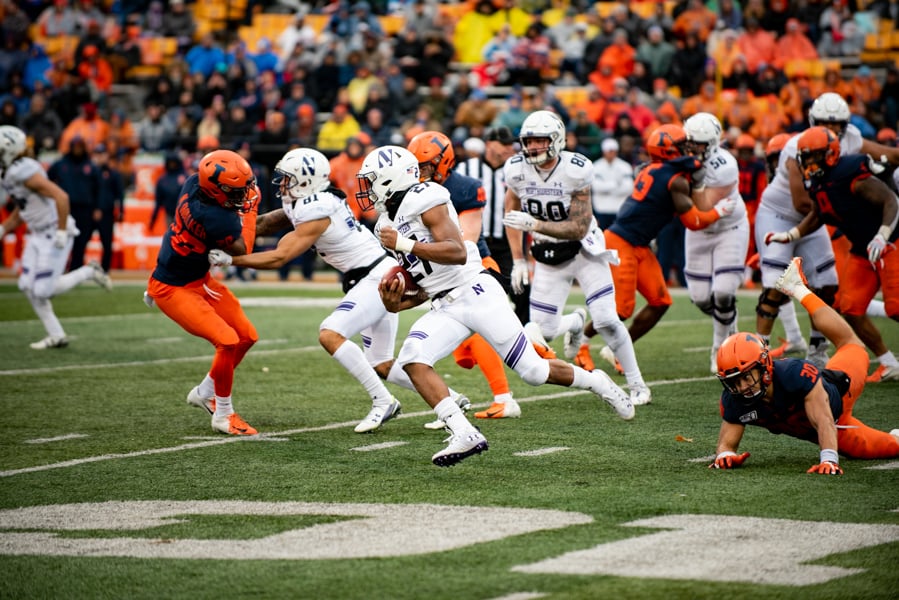 Coco Azema carries the ball. The freshman, normally a defensive back, rushed for 123 yards and a touchdown on seven carries as the Wildcats defeated Illinois on Saturday.

CHAMPAIGN — Unlike Illinois, Northwestern knew Saturday would be its last game of the season. So the Wildcats practiced like it — and played like it.

“We talked about this week being a bowl week mentality,” coach Pat Fitzgerald said. “The way that we did it today is a statement about the future of our program. Today we came down with a singleness of purpose. That was an incredible, physical display of the way you should play Big Ten football.”

NU (3-9, 1-8 Big Ten) came into Memorial Stadium with absolutely nothing to lose. And it was the Cats’ new faces that paved the way in their 29-10 win over the Fighting Illini (6-6, 4-5), as NU avoided its first winless mark in conference play since 1998 and won the Land of Lincoln Trophy for a record fifth consecutive year.

A couple of those new faces were playing out of position. Freshman Coco Azema, a defensive back, was moved into the running backs room out of sheer necessity. Sophomore Isaiah Bowser, junior Jesse Brown and senior John Moten IV were out, and freshman Evan Hull could not play in any more games to still be eligible for a redshirt. So Azema stepped into the offense and lit up the Illinois defense for 123 yards on just seven carries, including a 62-yard burst late in the third quarter.

Azema capped his performance — and the victory — with a 24-yard touchdown run with just over a minute to play in the game.

“We were down a million backs,” Fitzgerald said. “About five weeks ago, we projected the end of the season and we knew we needed to have at least one more guy ready to go. We put our heads together about who from the young guys we could put in the backfield, and it was Coco.”

Azema was the Cats’ leading rusher on the day, but just 12 yards behind him was the man who began the year as NU’s fourth-string quarterback. Sophomore Andrew Marty, in his first career start, carried 30 times — compared to 10 pass attempts — for 111 yards and two touchdowns.

Marty’s biggest mistake of the game came on the first play of the second quarter, when his interception set the Fighting Illini up inside the Cats’ 40 and led to Illinois’ only touchdown. But he came right back to lead NU down the field on the next possession — a 15-play, 75-yard march that took more than eight minutes off the clock. Marty capped the drive with a 12-yard run over the left side that gave the Cats the lead for good.

“I was going to play every snap like it was my last,” Marty said. “We dominated the line of scrimmage. The (offensive line) was absolutely terrific all day.”

Despite throwing for just 55 yards, Marty continued to make an impact in the second half as the Cats gradually pulled away. He threw a 34-yard touchdown strike to junior receiver Riley Lees in the third quarter to put NU up two scores, then added another touchdown on a quarterback sneak early in the fourth.

NU held the ball for more than 40 minutes, including just over 25 minutes in the first half. The Cats outgained the Fighting Illini 433-160, including 378-14 on the ground. Defensively, they limited Illinois’ leading rusher, Reggie Corbin, to minus-10 yards on seven carries.

Fitzgerald acknowledged after the game it has been a tough year for the program, but is confident the team will get stronger from the adversity it faced.

“This type of record,” Fitzgerald said, “will never happen again.”