Men’s Basketball: Northwestern’s offense slips down the stretch against Pittsburgh 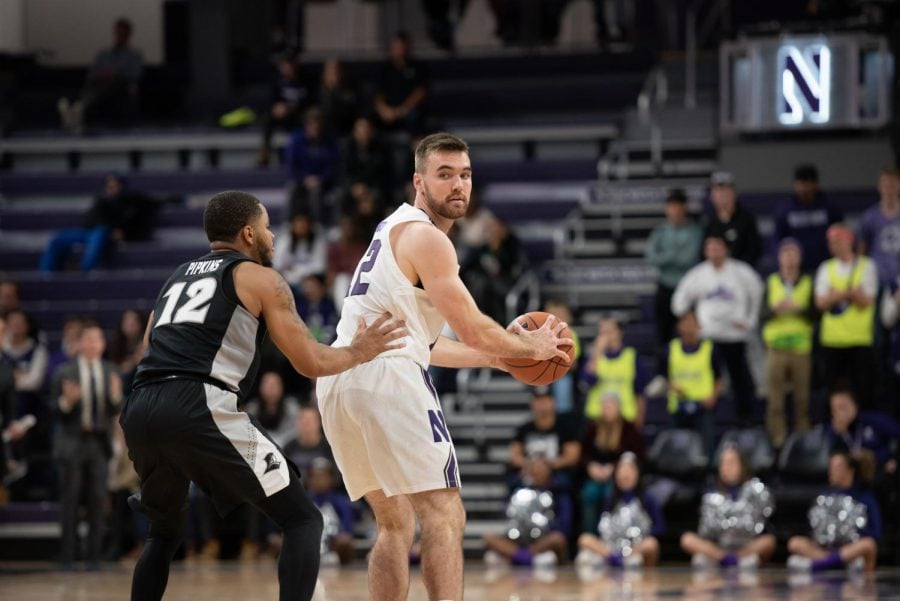 Pat Spencer says he’s the best player on the court, and his play is starting to back up his words. He’ll hit a ceiling-scrapping floater over the outstretched arms of a certified shot blocker. He’ll pull up from 25 feet without a second thought. He’ll dish an underhand, no-look pass with both feet off the ground.

The problem is the word is out.

Spencer did all he could Wednesday against Pittsburgh, scoring 18 points and hitting two contested layups in the final few minutes to bring a struggling Northwestern back in the game. But he can only call his own number, score and pound his chest so many times.

By the middle of the second half, the Panthers double-teamed Spencer every time he crossed half-court, and the Wildcats didn’t get enough from their other four starters to win the Fort Myers Tip-Off championship game. After having the best offensive performance of the season two days ago, NU (3-3) couldn’t get a basket when it needed one in a 72-59 loss to the Panthers (6-2).

“They’re a very tough-minded defensive team,” coach Chris Collins said. “It was one of those games where neither team was really functioning offensively. In terms of putting it in the basket, it was a slugfest.”

Following his 23-point outing against Bradley, Spencer started the game hot with 10 first half points. But after the break, Pittsbugh started trapping him, begging another NU player to make a play. The Cats were down just two points at halftime, but Pittsburgh took control by forcing the ball out of Spencer’s hands.

He took only five shots after the break, and the rest of the team shot 37 percent from the field. Freshman guard Boo Buie –– who finished with a career-high 16 points –– was the only other player to make more than two buckets after halftime.

As NU went cold, the Panthers finally found their rhythm from 3-point range. Pittsburgh missed all 11 threes the team took before halftime, but the Panthers made five in the last seven minutes of the game to turn a seven-point lead into a 15-point lead.

Spencer made two layups with less than four minutes remaining to bring the Cats’ deficit to six and give the team a chance down the stretch. But Ptitsburgh followed Spencer’s two layups with three more 3-pointers to win the game by 13 points.

As Pittsburgh pulled away, Collins said NU showed its youth. The Cats rely on eight players with little NCAA basketball experience — including Spencer — and Collins said the Panthers’ older core made the plays it needed to win the game.

“Hopefully through these experiences, we can find a way to grind out these wins when shots aren’t going down,” Collins said. “When it’s not looking pretty out there, can you find a way with defense and toughness and hustle plays to win games like that?”

Justin Champagnie led Pittsburgh with 21 points –– including 17 in the second half –– and was named the tournament’s Most Valuable Player.

That award would have gone to Spencer if NU pulled out the win, but the rest of the Cats’ starting lineup combined for just 14 points. Sophomore Pete Nance had a season-low five points, and freshman center Ryan Young was held scoreless on just one shot attempt.

The supporting cast squandered the second consecutive dominant game from Spencer, who made 16 of the 23 shots he took this week in Fort Myers. Even though he hadn’t played competitive basketball since high school and spent the last four seasons playing lacrosse, Spencer proved how he’s indispensible on NU.

“He believes he’s good, and he gives us a guy that can make plays out there,” Collins said. “For not playing in four years, he’s getting his feet wet at this level.”