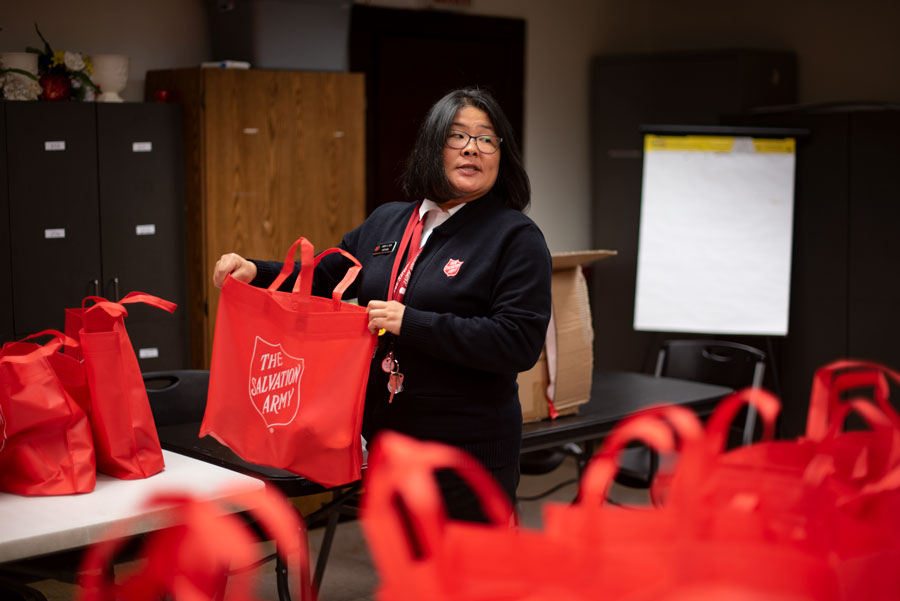 Capt. Mary Kim prepares a Thanksgiving Food Box for for one of this season’s bell ringers. The new leader of the Salvation Army Evanston Corps said she hopes to bring joy to the holiday season through these brightly colored bags of thanksgiving essentials which will be paired with entire turkeys for local residents.

As the daughter of two Salvation Army missionaries, Mary Kim spent much of her life swearing she wouldn’t follow in her parents’ footsteps.

“Growing up, everybody told me, ‘You’re going to be a Salvation Army officer, you’re going to be a pastor,’” Kim said. “I had a little rebellious streak … I was kind of just running away from what I knew, deep down in my heart, God’s calling on my life was.”

Decades later, Kim realized her path lay in ministry and set out to become a Salvation Army “officer,” in the military-style titles the church uses for its leaders. Since June, Kim has served as a corps officer for the Salvation Army Evanston Corps, where she’s looking to find new ways to connect the organization with its community.

Kim said she thinks of herself as somewhere between a first and second generation American. Born in Seoul, South Korea, she moved to Los Angeles as a child when her parents were sent to establish a corps there — likely the first Korean Salvation Army in the U.S.

After that, Kim said she spent much of her life bouncing between LA, Korea, Chicago — where her parents eventually moved — and Evanston, where she worked as a District 65 teacher for several years.

Though she enjoyed teaching, Kim said she felt like it wasn’t her true calling. In 2010, she decided to switch career paths and train to become a Salvation Army officer. She worked several different posts in the Midwest before moving into her current role.

“I was ecstatic just to be able to come back to Evanston after 15 years,” Kim said. “It’s a place that I know and enjoy. So it’s been a godsend for me to be back here.”

As a commanding officer, Kim said her main responsibility is to serve as the lead pastor for the congregation. Beyond that, she also oversees projects that reach out into the community, centered in Evanston and stretching down to Rogers Park.

Through service, the corps looks to fulfill the guiding Salvation Army principle of “heart to God, hand to man,” Kim said. In Evanston, she said homelessness, senior services and youth programming are the main areas of need that she hopes to help address.

The Salvation Army has faced criticism about LGBTQ issues from some who cite past instances of discrimination, and Chick-fil-A recently announced it would stop donating to the organization. However, The Salvation Army disputes this characterization; National Commander David Hudson recently wrote that The Salvation Army is open to all, including members of the LGBTQ community.

Geoffry Leedom, the corps’ youth development coordinator, said Kim is a major multitasker and is passionate about finding new ways to get the Salvation Army involved throughout Evanston.

“She is definitely on fire to go storm and down every single avenue of opportunity for the Salvation Army Evanston,” Leedom said. “Being back, I think she just wants to really dive all the way in right away. It’s funny to see her trying to do 20 things at once.”

Earlier this year, the Evanston corps was also looking to move into a different location in the 6th Ward, but residents pushed back on the proposal, expressing concerns that the Salvation Army would be a business operating out of a residential area. Kim said for now, the organization will continue to serve Evanston from its current location at 1403 Sherman Ave.

Beyond her commitment to the corps as a whole, Kim “cares for her people” on a personal level, said Ellen Kim, coordinator for the Evanston corps’ Christmas kettle fundraising campaign. She’s known Mary Kim for almost 20 years after first being a student in her Sunday school class, and said the elder Kim has long acted as a mentor and supporter — from connecting her with people who could help in her career to just grabbing hotpot and chatting about life.

Within the Salvation Army’s system, Kim said she knows her appointment in Evanston won’t last forever. Still, she said she’s enjoying her time in the community and being close to her family again (her parents and brothers all live near her in Illinois).

“I know in my heart and my spirit, this is God’s calling for me and God’s best for me,” Kim said. “I’m just really content and fulfilled where I am.”