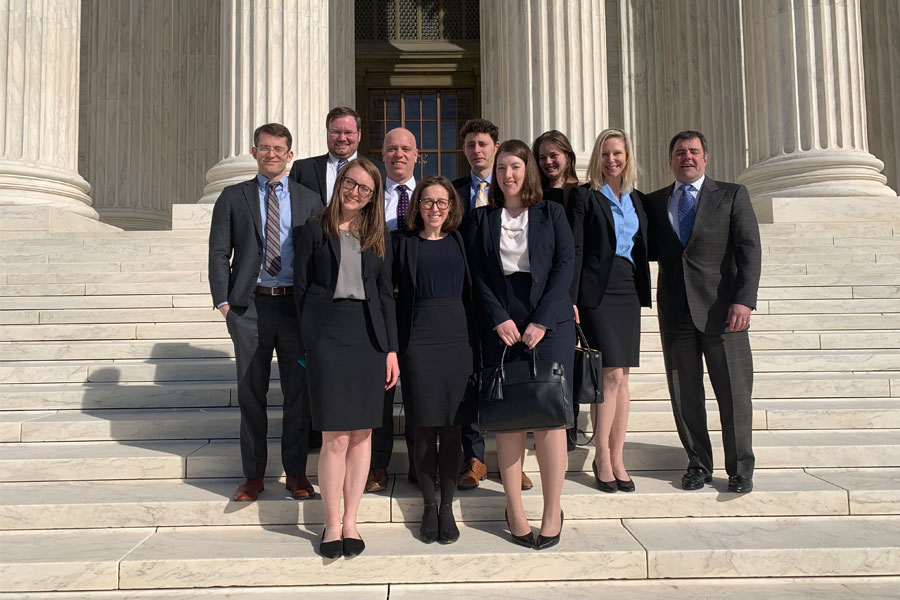 Prtizker School of Law students and faculty and representatives from Sidley Austin stand on the steps of the U.S. Supreme Court. The Appellate Advocacy Center has worked on about 250 cases overall.

Pritzker School of Law Prof. Sarah Schrup is no stranger to the high court.

As director of the school’s Appellate Advocacy Center, she helps students draft briefs and petitions for review in the Supreme Court and 7th Circuit Court of Appeals. Since opening 14 years ago, the clinic has worked on about 250 cases.

On October 7, however, Schrup argued for the first time in front of the nation’s nine justices. They will decide whether a state may abolish the insanity defense without violating the Eighth and 14th Amendments.

Schrup, advocating on behalf of the petitioner, James Kraig Kahler — who was convicted of murdering four relatives — contended that states like Kansas have violated the Constitution by removing insanity clauses.

What makes her argument unique: a group of three Northwestern Law students helped her craft it.

Though oral arguments at the Supreme Court are considered an achievement in the legal profession, many appellate attorneys spend the bulk of their time crafting cogent arguments, filing petitions and doing legal research on decisions made in other courts.

“Clinical experience is something that was missing in law schools until relatively recently,” Schrup said. “The (American Bar Association recommends hands-on-training, and that’s the gap we’re trying to fill.”

The Appellate Advocacy center consists of two clinics: one focused on federal appellate work and one on the Supreme Court. About eight students are enrolled in each concentration per year, and each clinic consists of a course that students take on top of doctrinal (more academic) classes, Schrup said.

The students — mostly third-year law students, though some second-years also participate — work on petitions for writ of certiorari (review), amicus briefs (in support of another party), and merits briefs.

Students also fly out to Washington once a year to meet with Supreme Court justices, Schrup said. Past students have spoken with all current justices except Stephen Breyer and Neil Gorsuch.

Lauren Pope (School of Law ’19) took the federal appellate clinic as a third-year law student last year. She decided to enroll because she had enjoyed “mooting” — simulating a court case — and wanted a chance to argue a real-life case.

Pope, currently a federal appellate clerk in Philadelphia, said she appreciated how the clinic forced her to focus on strategy in a way that theory-based classes did not.

Meredith McBride (School of Law ’19) enrolled in the Supreme Court clinic as a third-year student. She helped Prof. Schrup with Kahler v. Kansas and worked on several other cases over the course of the year. She said the experience gave her a bigger context of the concepts she had learned in the classroom.

“In third year, I was thinking about becoming a real lawyer with real clients,” McBride said. “It gave me a sense of the responsibility of being a lawyer and what it takes to do right by your clients.”

Carter Phillips (School of Law ’77) and Jeff Green, both partners in the firm’s D.C. office, coordinate the program. They alternate weeks flying to Chicago to teach students and work with them on cases, and other Sidley lawyers can also help.

Phillips, who has argued more cases before the U.S. Supreme Court while in private practice than any other lawyer, deconstructs a case with students. He also dissects oral arguments once the transcripts are released and the “behind-the-scenes” aspects of litigation.

While some Supreme Court clinics operate independent of law firms, the School of Law-Sidley relationship means cases get managed even when the school year ends.

Phillips said few students participated in clinics when he was a law student. An increased emphasis on clinical experience, he said, is a “very positive” change in legal education.

“The third year in law school if you’re just doing it in the old-fashioned academic way … I don’t think it’s necessarily all that valuable to you,” Phillips said. “You learn the most about what it means to become a lawyer in the first couple of years.”

Schrup said in the past 14 years, about half a dozen students have clerked at the Supreme Court, a stepping stone for many high-powered jobs in the appellate field.

Both McBride and Pope said the clinic helped them hone their writing skills and understand practical matters in the law.

“Sometimes in law school procedural roles can feel a little abstract and dry, but when you see an actual case, you see again how that affects what evidence comes in, what arguments you’re allowed to make at each stage of the appeal, what arguments you’re not,” said McBride, now a clerk on the 7th Circuit. “All that matters tremendously.”

After completing her current clerkship and a future clerkship, McBride will join Sidley Austin as an associate. She said she built relationships with Sidley lawyers as both a summer associate and a clinic student.

Pope described the federal appellate clinic as the “highlight” of her law school career.

“Law school can be a very individualistic kind of place, and working in the clinic is unique because you really feel like you’re part of a team,” Pope said. “And that’s so much more fun.”