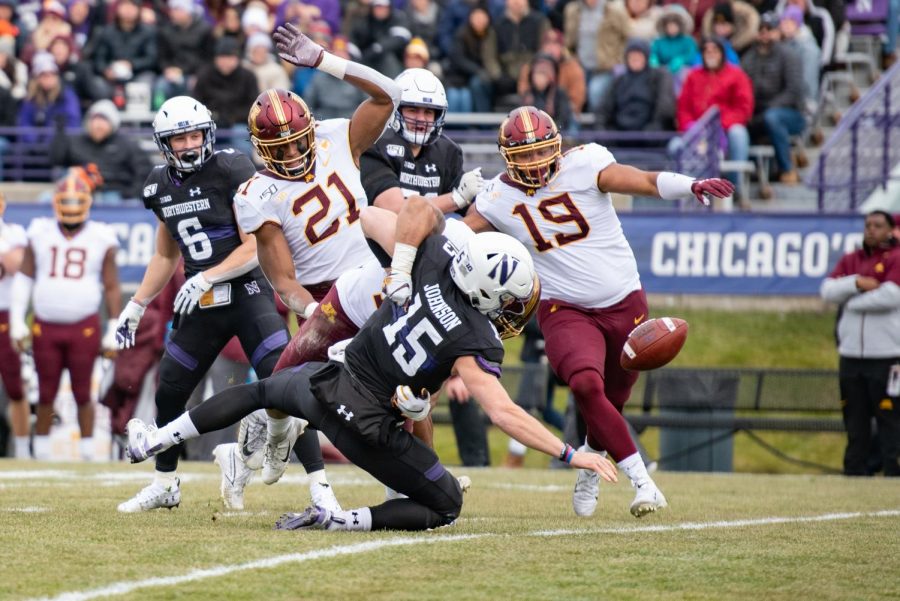 Hunter Johnson loses the ball after a sack. The sophomore quarterback and the Wildcats fell 38-22 to Minnesota on Saturday at Ryan Field.

For all the hand-wringing and excuses and experts explaining what’s really wrong with Northwestern this season, Pat Fitzgerald provided a pretty simple explanation after Saturday’s loss to Minnesota.

Tanner Morgan had an efficient 211 yards and four touchdowns, Rodney Smith added 77 yards on the ground and No. 10 Minnesota (10-1, 7-1) easily dispatched Northwestern 38-22 on Senior Day at Ryan Field. NU (2-9, 0-8 Big Ten) just had no way to stop Minnesota’s elite wide receiver duo of Rashod Bateman and Tyler Johnson, who torched the Cats all afternoon.

“They’re two good players,” junior safety Travis Whillock said. “And they made plays and we didn’t. Especially myself in particular, I didn’t play well enough. That’s on me and I know it’s a team game, but I take pride in trying to be the best I can be out there…you can put this one on me.”

The day could not have gone any worse for Hunter Johnson. The sophomore earned his first start since the Sept. 28 game at Wisconsin and finished with zero passing yards and negative 40 rushing yards. He was constantly under pressure and took a plethora of huge hits before finally being knocked out of the game by an Antoine Winfield Jr. sack. It was the third time this year that Johnson has been knocked out of a game with an injury.

Minnesota marched down the field with ease on its first three drives and built a healthy 21-0 lead, but a mistake from Morgan led to a safety that finally put the Cats on the board.

Sophomore quarterback Andrew Marty replaced Johnson and promptly led NU the length of the field for a touchdown drive. Jace James capped it off with a touchdown catch reminiscent of the plays Johnson and Bateman made all day for the guys in maroon and gold.

The Golden Gophers got the ball after the half and had no problems gashing the NU defense en route to a seven-yard touchdown grab by Bateman. But the Cats weren’t ready to go away, and Marty drove his team down the field and into the red zone. After a key fourth-down conversion, Marty plunged into the end zone on a Cam Newton-esque designed run to pull the Cats back within 12 at 28-16.

“I thought collectively as an offense we did a lot better,” Marty said. “I thought we were able to add a little bit of an element of QB run, and I thought I did a good job.”

NU suddenly had the momentum and desperately needed a stop, but the secondary again had no way to stop Johnson (115 yards, 1 TD) and Bateman (78 yards, 3 TDs). And after Bateman already had three touchdowns in the bank, it was only fitting that Johnson got on the board on a beautiful 17-yard dime from Morgan.

Marty continued to have success and added another rushing touchdown, but NU never really threatened the upset as Minnesota held serve to set up a massive showdown with Wisconsin for the Big Ten West title next weekend in Minneapolis. The Cats will now head to Champaign hoping to avoid a double-digit loss season in next weekend’s season finale.

There were a few bright spots for NU in the blowout loss. Senior defensive end Joe Gaziano earned the school’s all-time sacks record, capping off a fantastic career in purple and white. And Marty, seeing extended playing time for the first time in his career, finished with three total touchdowns and zero turnovers.

And yet, it was still a loss that leaves the Cats winless in the Big Ten, staring at a rare meeting with Illinois where they’ll enter as the underdogs. A year ago, NU was the surprise team that made a run to the Big Ten West title. Now, whether symbolically or by brute force, that team is Minnesota.

“They’re having a magical year,” Fitzgerald said. “We know what that feels like. We did that last year.”