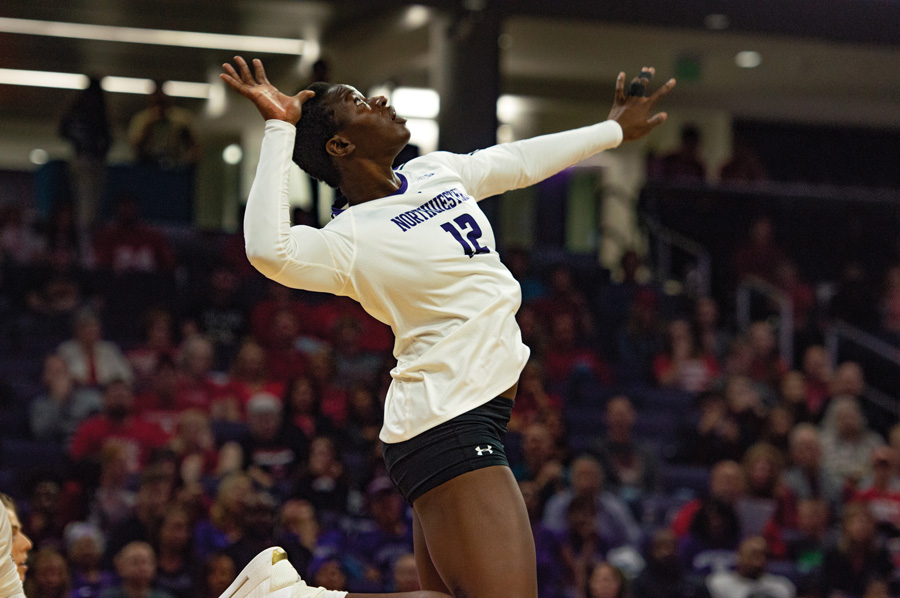 Outside hitter Temi Thomas-Ailara prepares to spike the ball. The freshman averages the second most kills in the conference at 4.07.

Northwestern kicks off its penultimate weekend of Big Ten play Friday with a road trip to Columbus to take on Ohio State.

The Cats (11-17, 2-14 Big Ten) split a pair of matches at home last weekend — NU handled Rutgers in straight sets Friday, but No. 8 Penn State returned the favor Sunday, dominating the Cats in a 3-0 win.

Northwestern played the Nittany Lions close in the second set, but unforced errors cost the team in the final few points. The Cats will look to rebound and finish close sets this weekend, which coach Shane Davis said has been a problem all season.

“For some reason, our players decided to get a little tentative rather than being aggressive,” Davis said. “That’s what we have to be better at.”

The status of outside hitter Temi Thomas-Ailara is still unknown. The freshman averages 4.07 kills per set, the second most in the Big Ten. However, she has only played in two of the team’s last six matches due to an injury she suffered at Rutgers on Oct. 27.

Davis said Thomas-Ailara was “not as ready as (he) thought,” when she came back to play against Nebraska on Nov. 6 and Michigan State on Nov. 9, and added that the team “wanted to give her more time” to fully recover.

Another question for Northwestern is the starting libero. Junior Lexi Pitsas was locked in the role for most of the season, but against Penn State, Davis swapped in senior Sarah Johnson midway through the match.

“We thought Sarah was doing a really good job from a servicing standpoint,” Davis said. “With the libero sport, you’re out there all six rotations. We wanted Sarah out there more.”

Whether Johnson or Pitsas starts at libero, the Cats will have their hands full with the Buckeyes.

Ohio State (14-14, 7-9) heads into the match off of a Nov. 16 win against lowly Indiana. While the Buckeyes are not even .500 in conference play, they are in eighth place in the Big Ten, only behind nationally ranked teams.

Ohio State proved they can play with anyone on Nov. 8, when they defeated No. 5 Wisconsin 3-1, handing the Badgers their only loss in Big Ten play this season.

After Friday, NU will travel to Maryland to play the Terrapins (13-15, 5-11), who are currently ninth in the conference. If the Cats win either of these two games, they will pull ahead of Indiana and Rutgers in the win column and leave the Big Ten cellar.

For that to happen, Davis said the team has to show more composure under pressure.

“They’ve shown that they can do it in tight situations,” Davis said. “You just have to review and get back into it.”