Football: Jared Thomas reflects on his Northwestern career coming to a close 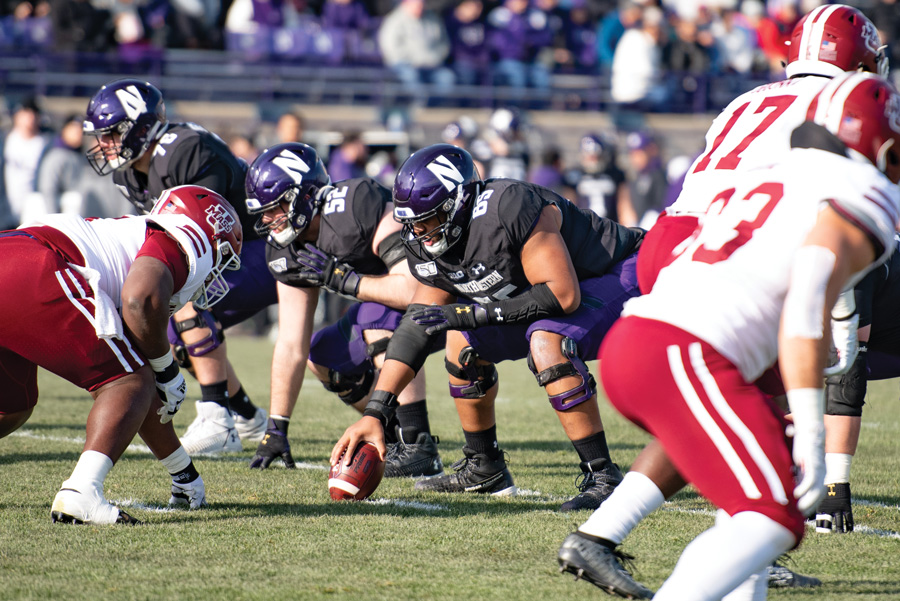 Jared Thomas prepares to snap the ball. The senior center has stepped into a leadership role on the offensive line this season.

Jared Thomas has certainly paid his dues with Northwestern.

He redshirted in his 2015 true freshman season. He appeared in every game a year later, but mainly as a backup offensive lineman and on special teams. Now, Thomas is not only in his second year as the Wildcats’ starting center, but also his first as a captain.

“There were times that I didn’t think I would be a starter here,” Thomas said. “Naturally, as a college athlete, you go through struggles, you go through questioning your abilities. To be going out on Ryan Field for the last time this weekend is a little bittersweet.”

Thomas did not discover football right away — he began playing basketball at age 4, but only took up football when he started high school. The sport is in his blood, however — his uncle, Chris Beaty, played for Indiana in the early 2000s.

Coming to the game late did not prevent Thomas from being a highly sought-after recruit. He chose NU over three other Big Ten programs, as well as three ACC offers.

After waiting three years to become a full-time starter, the Indianapolis native got the chance to return to his hometown early last December, when the Cats made their first appearance in the Big Ten Championship Game.

“Going back home to the Big Ten Championship last year was an unreal experience for me,” Thomas said. “I had a couple opportunities to play in (Lucas Oil Stadium) in high school for the state championship games, but being back home and the amount of people that came out to support was truly special to see. The way the crowd was rocking in the second half, that was something I’ll remember for the rest of my life.”

NU (2-8, 0-7 Big Ten) has not come close to returning to Indianapolis this season, but the tough year has provided Thomas with the opportunity to continue to grow as a leader. Within his position group, he was forced to take on that role, as junior tackle Rashawn Slater was the only other returning starter on the Cats’ offensive line this year.

Thomas also helped the rest of his unit transition through a coaching change. Adam Cushing had been NU’s offensive line coach for 10 years, but he left this past offseason to become the head coach at Eastern Illinois. Kurt Anderson, previously a quality control analyst, was promoted to take his place.

“He’s one of the best leaders I’ve been around, and I’ve coached some really good centers,” Anderson said. “I feel for him that our season hasn’t gone the way we’ve all wanted it to go because his leadership ability is not an indication of what our record is. The way that he leads, he deserves an undefeated season.”

A journalism major, Thomas interned at Big Ten Network earlier this year, and coach Pat Fitzgerald joked with the media at this week’s press conference that he was “coming for your jobs.” He was an academic all-Big Ten selection each of the last three years while protecting a pair of program linchpins in running back Justin Jackson and quarterback Clayton Thorson.

His leadership has made an impact on all his teammates, not just those on the offensive line. Junior linebacker Paddy Fisher, a second-year captain, said he and Thomas have picked each others’ brains on football and life in general.

“Maybe the first couple years, he looks back with the pain of regret,” Fitzgerald said. “(But) he’s been really consistent, his leadership has been outstanding, the work he’s done with coach Anderson being the glue in the room has been great. In a year that has not been what we want to have, he’s been a definite bright spot.”