Opening Remarks: We shouldn’t settle for Medicare for All 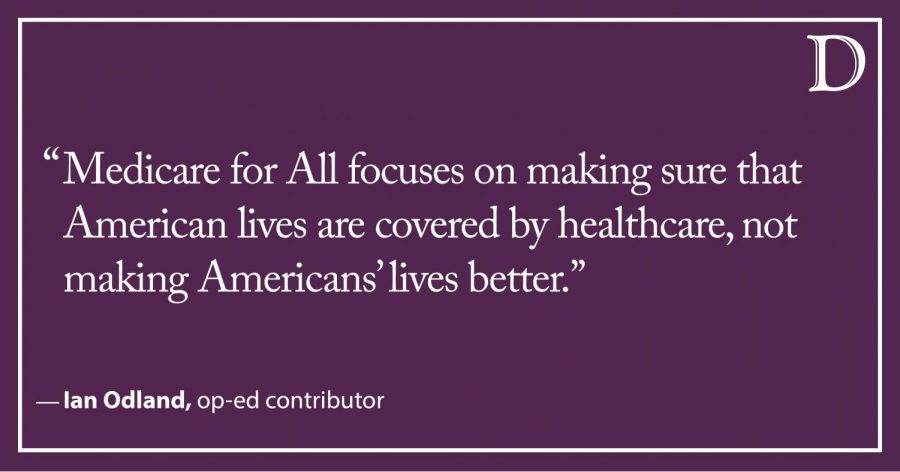 Every week a member of Political Union’s executive board will share their thoughts on an issue of their choice in this column. The pieces do not represent the opinions or stances of the wider Political Union, but rather offer an individual’s ideas to spark a conversation.

I want you to imagine for a second that we live in a state where the executive and the legislature are in favor of a single payer healthcare system that will cover all of its citizens. Let’s call it Green Mountain Care.

I’d like to welcome you to Vermont in 2014. Democratic Gov. Pete Shumlin has just announced legislation that would put Vermont on the path to a single-payer system. Initial cost estimates stated that single-payer could reduce state health care spending by 8-12 percent. However, two years later, the government savings were predicted to be just 1.6 percent. And that doesn’t even approach the costs of such a system. Governor Shumlin’s own estimates projected a doubling of the state’s budget and a necessary payroll tax of 11.5 percent on businesses and tax increases equal to 9.5 percent of an individual’s income.

Today, Green Mountain Care does not exist. And a Democrat is no longer in office. In a state that elected Bernie Sanders with 70 percent of the vote, Phil Scott, a Republican, got re-elected as governor in 2018 with 55 percent of the vote.

This is the roadmap of Medicare for All.

Currently, there are two major presidential candidates who support Medicare for All as defined by this resolution. U.S. Sen. Elizabeth Warren (D-Mass.) has proposed a single payer system that would cost $52 trillion over 10 years with $20 trillion in new federal spending. That is 25 percent of the US annual GDP. In 2018, we spent 18 percent of U.S. GDP on healthcare.

High government spending on medicine takes investment away from important sectors of American wellbeing, impacting health outcomes — like education, housing and nutrition. Medicare for All focuses on making sure that American lives are covered by healthcare, not on making Americans’ lives better. Estimated Medicare expenditures for patients in the last two months of their life is $55 billion. That is more than the United States spends on the Department of Homeland Security or the Department of Education.

As an alternative, I offer up a healthcare market altered to utilize the machinery of capitalism — competition, financial incentives and alterations to the tax code — in ways that reduce costs, improve outcomes and make Americans’ lives better, not just covered.

Medicare for All fails to address the many real failures of today’s healthcare market.

The fee for service model, which incentivizes more procedures and medications, not better treatment.
Investment in healthcare infrastructure in rural communities that lack the population base to sustain hospitals.
A lack of transparency in a system, which requires one to itemize their healthcare bill just to see what they are paying for.
Poor nutrition science and tax incentives, which lead to Americans making poor health decisions.
A focus in healthcare on keeping people alive as opposed to giving people a high quality of life.
The limited amount of residency positions funded by the United States government.
Currently, 22,000 doctors do not accept Medicare, partially because they offer reimbursements that are 20 percent lower than private insurance.

Finally, the implementation of Medicare for All would result in two million Americans who work in the medical billing industry losing their jobs. Implementing Medicare for All could jolt an economy that relied on healthcare hiring to recover from the recession.

Simply put, Medicare for All is settling for the government to provide healthcare, and we deserve better.

Ian Odland is a McCormick Senior. He can be contacted at [email protected] If you would like to respond publicly to this op-ed, send a Letter to the Editor to [email protected] The views expressed in this piece do not necessarily reflect the views of all staff members of The Daily Northwestern.