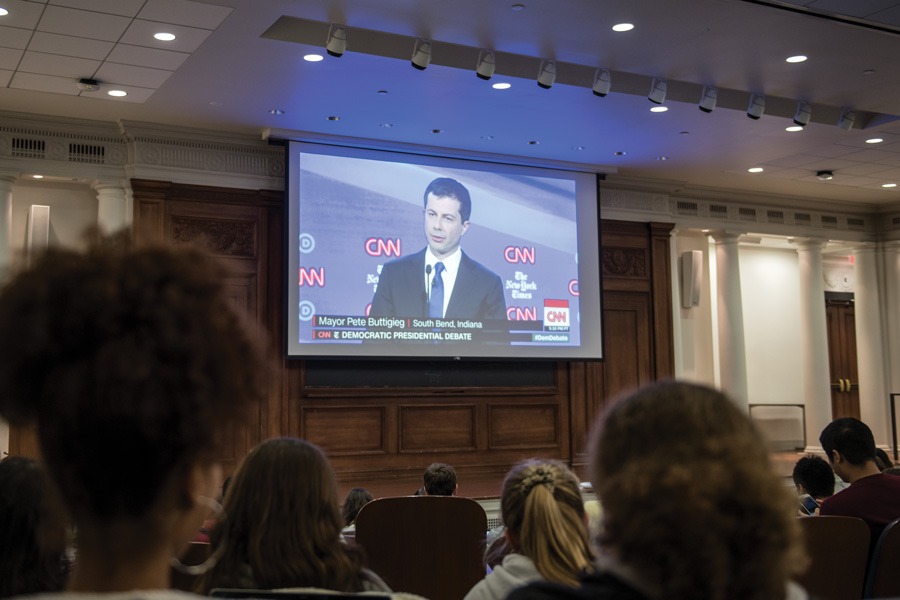 Mayor Pete Buttigieg on CNN during a Democratic debate. Evanston Mayor Steve Hagerty attended a fundraiser for Buttigieg in November.

In 2020, Evanston Democrats are spending green to vote blue.

According to the Federal Election Commission, Evanston residents have given almost $237,000 in individual donations to presidential candidates for the 2020 election in the first three fundraising quarters of 2019. Approximately 75 percent of those donations have gone to what are widely considered to be the five top-tier candidates for the Democratic primary — former vice president Joe Biden, U.S. Sens. Elizabeth Warren (D-Mass.), Bernie Sanders (I-Vt.), Pete Buttigieg, the mayor of South Bend, Indiana, and Kamala Harris (D-Calif.).

The city has a distinct frontrunner for overall fundraising in Buttigieg, who has received over $84,000 from donors who list an Evanston address. His donations total almost $50,000 more than Warren’s, who, at $35,000, has raised the second-most from residents.

However, in terms of the number of donations, Sanders leads the pack with 508, sitting comfortably over a second-place Warren, who has 394 donors, though his average amount per donation is only $47.10. Biden takes first in average donations with $253.54, despite having only 69 contributions, while Buttigieg and his 387 donors raised an average of $218.02 per donation.

Neal Weingarden, the director of communications for the Democratic Party of Evanston, said that Warren and Sanders supporters frequently utilize the DPOE’s space, but Buttigieg supporters often organize their own events.

“We’ve really only had the Warren and and Sanders people aggressively wanting to use the office,” Weingarden said. “The Buttigieg people have come by but they haven’t showed up in the same way as the Warren or the Sanders people.”

Many Democratic candidates have declared that they are rejecting donations from outside groups such as corporate PACs, Super PACs and members of the fossil fuel industry. However, some candidates have turned to alternative ways of attracting big donors, such as private fundraising events. These events are invitation-only and are reserved for influential figures willing to pay a high price for direct interaction with their candidate.

One such candidate is Buttigieg, who held a private fundraiser on Nov. 6 in Winnetka. Mayor Steve Hagerty, who is one of 58 mayors from around the country to sign a joint endorsement of the candidate in September, said that “a couple hundred” people attended the closed-door event to hear Buttigieg speak.

“I’ve been to a couple fundraisers, and there are a lot of people that want to go,” Hagerty said. “They’re sold out venues, when they’re being hosted in people’s homes. The people that I’m seeing at the fundraisers are people who are strong Democrats, but they’re moderate Democrats.”

Conversely, some candidates, such as Warren and Sanders, have sworn off these private fundraisers. Instead, they depend more on individual donors and grassroots movements to raise their money.

Meg Welch, an organizer for Sanders who was selected as a pledged delegate for his campaign in Illinois’ 9th Congressional District, said that she felt his refusal of big donors was why Sanders had the highest number of contributions in Evanston.

“The focus is on ordinary people — ordinary working people with families feel included in his campaign,” Welch said. “They feel spoken to, they feel like he’s speaking to them. And their participation is welcome.”

However, no matter the candidate, Weingarden said that he is encouraged by the levels of participation he sees in Evanston, and he hopes the support will continue into the general election.

“Whoever wants to be active at this point in the race, whoever their candidate of choice is, we want to help be a platform for them to put their efforts into this election,” Weingarden said. “We want to make sure that we can retain that through 2020, and if their candidate ends up dropping out, we don’t want to see people who give up on the Democratic party.”