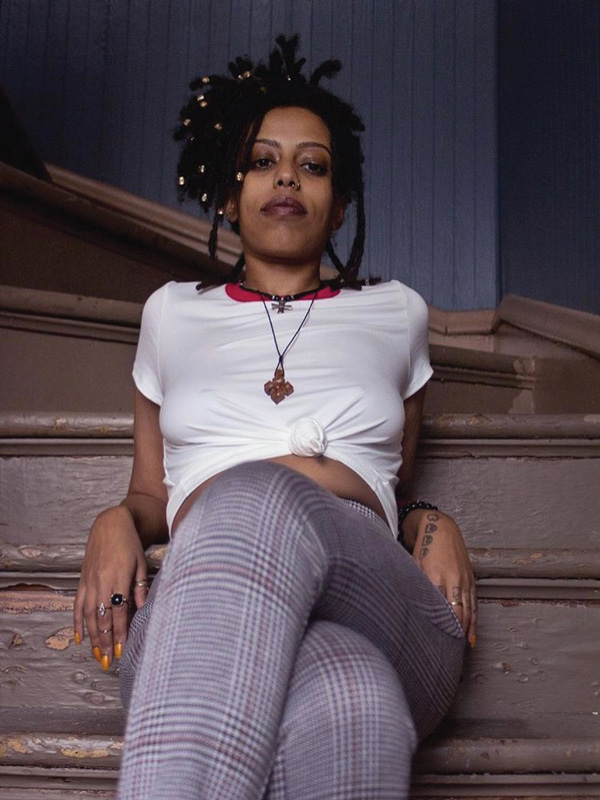 Chicago-based rapper Lulu Be. Two years after the debut of her first EP, “Lululand,” the artist will release her second EP “BOMBSHELTER” on Nov. 29.

As a first-generation Ethiopian, Chicago-based rapper Lulu Be. grew up with her parents’ groove and her brother’s hip-hop beats. Two years after the debut of her first EP, “Lululand,” the artist will release her second EP “BOMBSHELTER” on Nov. 29, which weaves afrobeat, Chicago juke and hip-hop into her unique style. Ahead of the album release, The Daily chatted with Lulu about her childhood, inspiration and her love for live performance.

The Daily: What does it feel like growing up in the city of Chicago as a first-generation Ethiopian?
Lulu: It’s really a balance. There are a lot of things in American culture my Ethiopian side of the family doesn’t understand. My parents recently came to visit me during the summer. I just happened to be wearing a sports bra and sweatpants, and my mom almost lost her s–t. She was like “You’re not going out like that. It’s like you’re naked.” Everything I did was not traditional in the sense of what my family expected. Like my schooling and my choice of going into music. I kinda just ripped the Band-Aid off. I’m 26 years old now. There are still certain things that I’m trying to break away from and ease myself out.

The Daily: You went to Columbia College Chicago to study music engineering. How would you describe the music scene there?
Lulu: I used to hate school. I just didn’t like traditional schooling. It always felt like a prison and being forced to do things that I didn’t really ask for. But Columbia was creative and nontraditional. The professors talked about things that were relatable because they worked in the fields. Sometimes they couldn’t come to class because they were on tour or had to mix for another artist. Things like that excited me and made me want to come to class at the end of the day. There were a bunch of creative weirdos with very unorthodox thinking. The end product they make makes sense and looks so beautiful, but it’s like, “How did they get there?” It’s a genius mindset.

The Daily: How was your first time performing on stage? What is particularly charming or terrifying about live performance?
Lulu: I was very, very, very nervous in the beginning. My heart used to pound out of my chest to the point where I’m like, “Oh my god, can they hear that through the mic?” I’m a clumsy person. I really wasn’t super comfortable with my movements, but as soon as I got on stage — I can’t lie — I fell in love. I am 100 percent here for this. I would do this forever until I’m unable physically to do it because it’s such a rush. It’s like a drug. I love making people dance. I love seeing people in the best way. It’s really infectious.

The Daily: How do you feel about your forthcoming EP ‘BOMBSHELTER’? Where did the concept come from?
Lulu: I called my house the bomb shelter even before this project. Spiritual warfare is everywhere, but in my house, that’s my safe space. There was a point where I felt discouraged to the point that I retreated into myself and got in a cocoon. Everybody has an opinion. Everybody you know wants to tell you about yourself. They almost don’t give you a chance. They judge you off of first glance, but in my house, that’s my safe space. That’s my shelter. I could be at peace. I can mess up without anybody judging me. When I started messing around with production, I started making beats, and the sound was very good for it.

The Daily: It’s been two years since you released your first project “Lululand.” How have you changed as a person and as a musician?
Lulu: I definitely grew up. I was crawling at first. Now, I definitely feel like I’m doing this with a nice brisk jog. I’m moving. Before, I was like a puppy who was really excited and all over the place. I’m still excited. But when it comes to my sound and music, I’m also very firm.