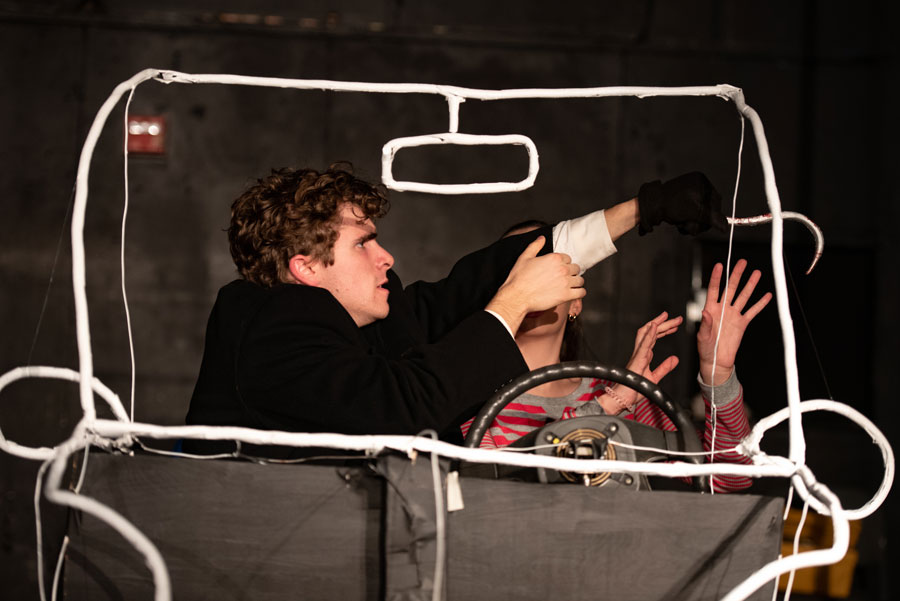 Cast members rehearse “Hookman.” Presented by Lipstick Theatre, the 75-minute production will run in Shanley Pavilion from Nov. 21 to 23.

Communication junior Valen-Marie Santos imagines the experience of growing up as a woman isn’t too far off from living in a slasher movie, a message explored in Lipstick Theatre’s latest production “Hookman.”

“Hookman” follows a freshman named Lexi who’s coping with sexual assault and the death of a friend. At the same time, Lexi and her peers need to deal with the college transition and a serial killer on the loose. The 75-minute production will run in Shanley Pavilion from Nov. 21 to 23.

As the show’s director, Santos said although the show deals with violence and trauma, “Hookman” is still a comedy.

“There’s a quote that we say a lot in rehearsal about needing to laugh in order to not cry,” Santos said. “Lightness, laughter and absurdity go hand in hand with what’s heavy, rough and traumatic. They coexist, and that’s where this show lives.”

Communication sophomore Julianna Lee said “Hookman” is a tech-heavy show that involves fake blood and other special effects makeup, as well as the synchronization of sound, lights and projections. As the show’s sound designer, Lee said selection of sound and background music help strike the story’s careful balance between horror and comedy.

Communication sophomore and show producer Amal Salem said she’s excited for audiences to see “gory moments” and the dynamic fight choreography. Still, she stressed that “Hookman” does not treat the underlying issues of trauma and violence lightly.

“The show dramatizes and satirizes a lot of the things that women do go through, but I don’t believe at all that it’s making fun of it,” Salem said. “(Santos) has done an amazing job to really use that as a way to show how crazy it is that people are going through these things every single day.”

Content warnings listed on the Facebook event for the show include mentions of sexual assault, heavy violence, racial prejudice, alcoholism, existential themes and frequent mentions of death and grief.

Santos said she thinks it’s important to address such topics through the lens of the college transition experience. To her, the lack of conversations about new obstacles are part of the reason unhealthy coping mechanisms develop.

“People talk about, ‘Oh, when I get to college, I’m going to have to make my own food and do my own laundry,’ and all that silly stuff,” Santos said. “No one likes to talk about the things that happen to your own self esteem, self-worth and self identity.”

“Hookman” hopes to remind people that coping with trauma doesn’t make someone less of a person, Santos added. She said it’s important to recognize that there are healthy ways to confront and live alongside pain.

Salem said even though she expects a lot of laughter and gasps throughout “Hookman,” she hopes people can also resonate with the truth in the story.

“I want them to recognize that it’s real life,” Salem said. “(In Hookman), it was just put on, it was a little bit exaggerated, but it’s still real life. So really be careful, look out for one another and for yourself and don’t be afraid to reach out.”