Thuillier: A farewell to journalism, my greatest college adventure 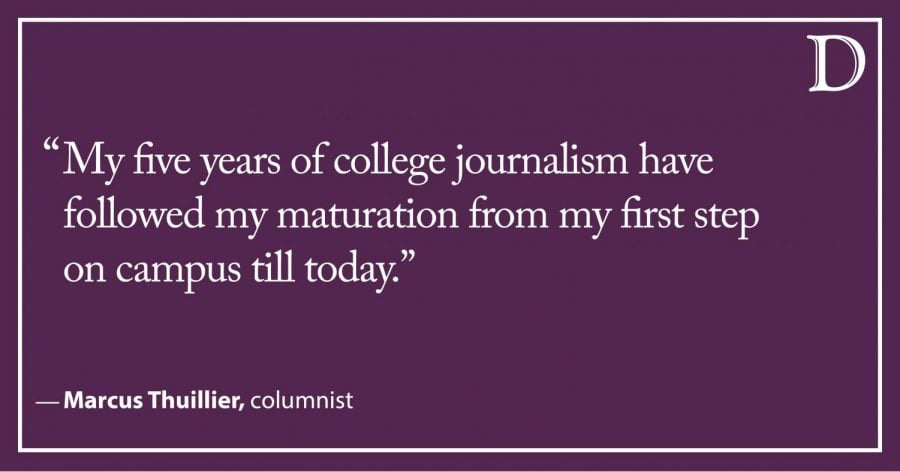 It’s been quite the adventure since I stepped into the newsroom of the UCSD Guardian — the undergraduate newspaper at the University of California, San Diego — over five years ago. I attended recruitment night for the free pizza, and ended up joining the opinion and sports desks.

This will be my last column I ever write in college, finally concluding a journalistic career on which I look back fondly.

Two months into writing for my undergraduate newspaper, the entire management team quit or graduated. After some reshuffling, I found myself in an editorial role with just a few articles to my name. After three more months, I was the sports editor of my college newspaper.

Our first order of business that quarter was to stand up to our student council, fighting a resolution that imposed an outside counselor on our student-run independent paper. I still have a copy of the speech I wrote that day. If anything, this experience made me realize how much I cared about the paper and what it represented.

My second year started off on a high. George Karl and the Sacramento Kings came to campus during preseason and I had the opportunity to interview the coach and the players.

Just a few weeks later, I remember sitting in the news office on Nov. 13th, 2015, following the events in Paris in complete disbelief. My coworkers and friends at the paper checked in on me and helped me through that day. That was the year I took control of my column in the opinion section as well, a column I am still writing today. It used to be called “across the globe”, as I was writing about U.S. issues and their equivalents in other countries.

At the end of that year, I rose up the ranks in the newsroom, leaving my position as sports editor to become one of two managing editors.

Why anybody would give a physics major with five years of experience in English that much responsibility is still lost on me, but I just went with it. It was definitely the hardest year I had in student journalism, as going from just an editor to one of the three people responsible for the paper was a much bigger step than I anticipated.

Managing a paper is much more than editing pieces. I had to incorporate a delicate balance between the actions and initiatives of Associated Student Government and the various student groups on campus. More often than not, I was seen in a negative light by the administration. It was incredibly difficult to balance my journalistic duty with my community duty, as an organization that is supposed to both abide by the rules of journalism and coexist with so many other students. Even after the editor in chief and other managing editor left the paper during the year, I managed to bring the paper to the finish line.

Reprising my role of managing editor, my senior year was more of the same, except for two pretty significant things.

First, I was able to complete my own personal Grand Slam, writing for all six sections my paper had: sports, opinion, news, features, lifestyle and Arts & Entertainment. I was also able to launch podcasts. One was for the NBA with a Warriors and two Lakers fans. The other was an opinion podcast, recapping the week’s articles with the opinion editor at the time. Both were challenging in their own way but brought me a lot of confidence and new experiences. I never thought I would ever be creative enough to produce artistic content but here I was four years later, with designing, podcasting and managing experience.

Coming to Northwestern and The Daily, it was time to refocus on what I knew in the first place: writing. These past four quarters of doing just that have been really important to me. I needed to get back to a learning — and I’ve been able to do that from all the wonderful and talented people that work at The Daily. I’ve always been very aware of my strengths as a writer, but over the past 15 months, I’ve noticed improvements to other areas of my, I’ve noticed improvements to other areas of my writing. More importantly, I have truly come into my own, finally writing the kinds of pieces I have always wanted to share.

My five years of college journalism have followed my maturation from my first step on campus until today. I used to write about less controversial topics, scared of ruffling feathers. For a solid period of time, I replaced my criticism of President Donald Trump with criticism of the government, for fear it might shine too negative a light on me when applying for American citizenship.