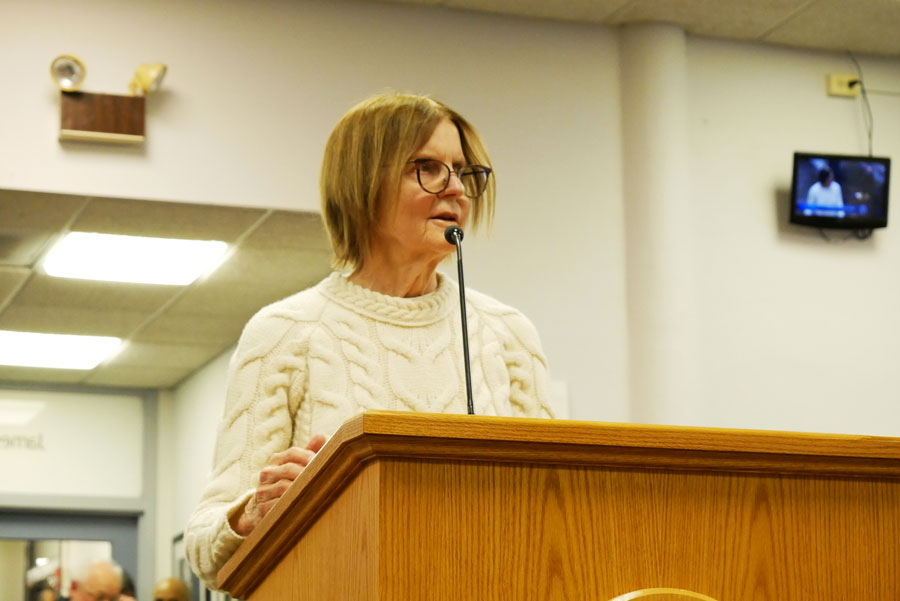 Former mayor Elizabeth Tisdahl. Tisdahl spoke during public comment in support of Kevin Brown, who was recently terminated by the city.

Brown was terminated Friday because he used a city credit card to pay off parking tickets incurred while parking city vehicles in the Lorraine H. Morton Civic Center parking lot, according to Dear Evanston. Brown lost his job, despite his assertion in a Facebook post that his boss Lawrence Hemingway — the parks, recreation and community services director — approved of this payment method.

Porschia Davis, former program coordinator for the Youth and Young Adult Division in the Parks, Recreation and Community Services Department, agreed with Brown’s assertion that senior leadership allowed the use of city credit cards to pay for tickets. She said staff never received consequences for these infractions until Brown’s termination.

Before the floor opened for public comments, Mayor Steve Hagerty said he could not disclose any details of Brown’s termination.

“Due to the fact that the matter many will speak on is a personnel matter governed by personnel policies and applicable laws, neither the City Council nor city manager is able to discuss the matter, or release any information,” Hagerty said.

While making her public comment, Tisdahl reflected on her time in office and her work with Brown. The Youth and Young Adult Division was created during her time in office, which Brown advised up until his termination.

Youth and Young Adult Division is a program that seeks to support young people with life changes through education, civic engagement, workforce development and alternative recreation.

“Kevin has done a remarkable job,” Tisdahl said. “One of the best things that I did as mayor, I believe, was to encourage Kevin and to support Kevin, and I’m here to ask you, do the same.”

City clerk Devon Reid said the council and the mayor do not have the authority to hire or fire staff. He said this responsibility falls on the city manager.

Interim city manager Erika Storlie declined to comment about Brown’s termination or address any allegations made during public comment.

Community members praised Brown’s work with the division and many speakers vouched for his character and the positive effect he has had Evanston.

“The thing about Kevin was he was a beacon of light in this community,” said 2nd Ward resident Nicolette Jones. “He made Evanston better because he was here.”

Residents during public comments expressed their concern about the legitimacy of Brown’s termination. Liz Ribeiro, a 3rd Ward resident, alleged that racial inequity was the root of his termination.

Reid commented from the lectern that he has seen a pattern of racial inequality in Evanston.

“We’ve seen a pattern of folks who speak out against racism and call out the city, being systematically quickly fired and terminated,” Reid said, “I think we have a duty to address this.”