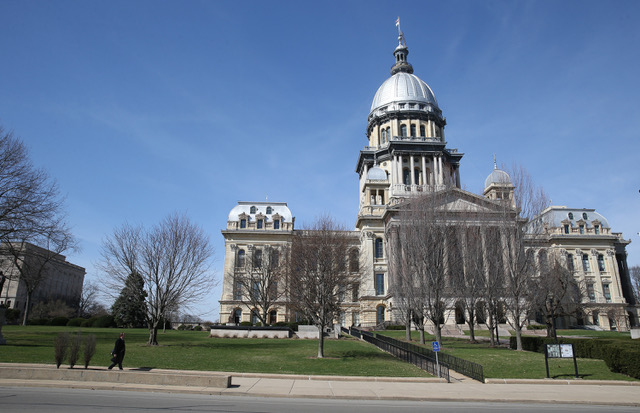 The Illinois State Capitol on March 9, 2017, in Springfield, Illinois. With a new round of scandals, state representatives are exploring new ethics proposals.

Madigan has been under scrutiny since this summer because of his close relationship with Michael Mclain, a ComEd lobbyist. He’s accused of helping the electrical company hire more politically connected lobbyists to curry favor with Illinois politicians.

But Madigan is not the only one engulfed in scandal. State Rep. Luis Arroyo (D-Chicago) was charged with bribery late October for delivering $2,500 in monthly payments to another representative, who the Chicago Tribune speculates is state Sen. Terry Link (D-Vernon Hills), in return for support of a bill on gaming machines.

State Sen. Thomas Cullerton (D-DuPage) was charged with federal embezzlement in August for pocketing $275,000 in salary and benefits from the Teamsters union. Arroyo is no longer in office, but Cullerton is still serving, though he was stripped of his position as chairman of the Senate Labor Committee.

With all these scandals, state Sen. Laura Fine (D-Glenview), who works in Springfield with these representatives, said she’s disappointed with her colleagues.

“When you have a few bad apples, it puts a cloud over everything that we are able to accomplish,” Fine said. “This is a sentiment that a lot of people feel and we are very angry.”

However, corruption in Illinois is nothing new. Four governors have served prison time, including former Democratic Gov. Rod Blagojevich, who was impeached for federal corruption charges in 2009. The state ranked third in a study from the University of Illinois at Chicago about corruption in state politics.

However, Fine mentioned that might only be the case because Illinois is successful at identifying corrupt officials.

Alisa Kaplan, a policy director at Reform for Illinois, described how the Illinois legislature has curbed corruption within its ranks.

“The Illinois legislature really struggles with gaining the trust of Illinois residents,” Kaplan said. “There has been a perception for a long time, fairly or not, that corruption is endemic in the legislature.”

Kaplan cited the “entrenched power structure” within the Illinois legislature as one reason for corruption. However, she stressed that there are a litany of other problems.

Specifically, she said that having similar players over a long period of time who acquire more and more power creates “the perception or reality of corruption.”

While Illinois is notorious for corruption, Michelle Jordan, the president of the Democratic Party of Evanston, said the public still doesn’t know the scandals going on today due to the lack of media coverage.

She said most people are not paying attention to the corruption in the statehouse.

“The number of writers at the Tribune and the Sun-Times has dropped off so dramatically,” Jordan said. “People are not covering county, state and municipal government.”

Though the Illinois legislature has had its problems, Fine said new ethics proposals aim to root out corruption for good.

One bill focuses on requiring lobbyists to register all of their clients, while another bill would form a task force on corruption.

“We want to make sure that what we do is proper legislation that really weeds out the problem,” Fine said, “and allows us to move ahead from this issue and rid ourselves of the corruption.”