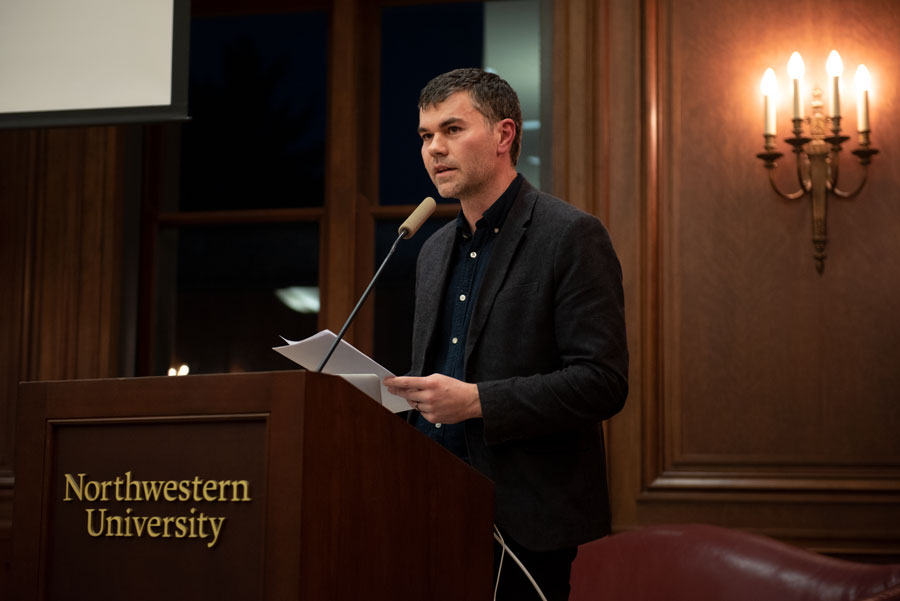 University of Massachusetts Prof. Thomas Stubblefield speaks during the Kaplan Institute’s fall keynote event. Stubblefield and O’Brien discussed how erasure of works of art can alter perceptions of history.

The erasure of and changes to monuments or works of art can change perceptions of history, two scholars said Monday during the Kaplan Institute Fall Keynote event.

University of Minnesota Prof. Jean O’Brien and University of Massachusetts Prof. Thomas Stubblefield presented their different yet overlapping works regarding memorialization during the talk, held in Harris Hall.

The event, co-hosted by the Alice Kaplan Institute for the Humanities and the Center for Native American and Indigenous Research, was a part of the Multicultural Student Association’s 30 Days of Indigenous programming through the month of November, which is Native American Heritage Month.

During the keynote presentation, O’Brien, a co-founder and past president of the Native American and Indigenous Studies Association, talked about her work documenting indigenous monuments and movements to change narratives around the founding of the United States, such as the “National Day of Mourning” that the Wampanoag Tribe observes during the American holiday of Thanksgiving.

“Wampanoag and other indigenous public intellectuals have brought new energy to their engagement with this landscape to craft a more complicated and coherent depiction of New England’s past,” O’Brien said. “Unlike most of the memorial landscape of Plymouth which freezes the town as an English place, these educators create ways to introduce visitors to experiences and perspectives excluded from the dominant story.”

Speaking of the display put on by the indigenous tribe at Plymouth, Massachusetts, O’Brien noted that counter-monuments helped “close the cognitive distance between the past and the present.”

Stubblefield, an associate professor of art history and media studies, said memorialization and techniques used to reinvent and change monuments and artwork could involve techniques aimed to “disturb the equilibrium of complacent cultural discourses and shift the meaning of their terms.”

He discussed art pieces that attempted to create a Eurocentric picture of history in their time, and he noted how modern artists like Yinka Shonibare are subverting their themes.

Wendy Wall, director of the Kaplan Institute, said she was happy with the event’s turnout and was especially pleased to see people of different academic interests and roles at the University come together.

“Each year we try to create a yearlong set of events devoted to showing how you can have many approaches to a single word,” Hall said. “We wanted to have someone working in visual culture and art history and pit them against someone working in history,” she explained.

Some attendees stayed after the presentation to chat with fellow audience members. Doctoral student Nnaemeka Ekwelum, who is also an educator in the Boston area, said the event’s discussion of indigenous history reminded him of how black history is a “tool for not only remembering, but for forgetting as well” in secondary school curricula.

“Being in an African American Studies program, I’m learning so much that I didn’t know about black history or things that I was taught in a fictitious way,” Ekwelum said. “When you actually know your past you have a better understanding of who you are and where you can go.”

Kelly Wisecup, the co-director of CNAIR and a non-native scholar, said it is important to think about erasure and how living native intellectuals are trying to change historical narratives — a central theme of O’Brien’s talk.

O’Brien, a member of the White Earth Ojibwe nation, spoke about the differences between the depth of historical education based on identity after the event.