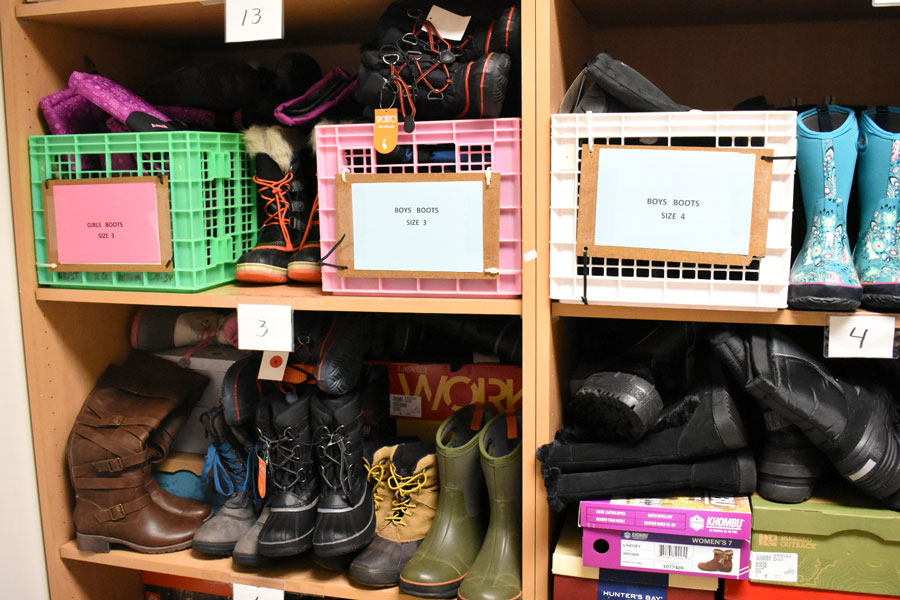 Several Evanston/Skokie School District 65 PTAs founded the organization almost 90 years ago when school officials determined that children were missing school because they did not have adequate cold weather clothing and shoes. According to the website, the organization has dedicated itself to the mission that “no Evanston child should miss a single day of school for need of warm, sturdy clothing.”

ESCCA is completely volunteer-run — parents and community members carry out functions such as grant-writing and filling board member roles. Facilities manager Kelly Siddiqui has been volunteering with ESCCA for eight years, since her own kids were in elementary school.

Students and parents can schedule appointments through their school four days a week during the busy season from September to March. Social workers will also sometimes reach out to families. During their appointments, students can come to pick up a winter wardrobe at ESCCA headquarters in the Joseph E. Hill Education Center. For the rest of the week, volunteers sort through donations and categorize them.

“What we do is pretty simple,” Siddiqui said. “It’s environmentally friendly. We’re basically recycling these clothes. Yes, we buy new shoes and boots and underwear and all of that, but we’re giving clothes a new home.”

Siddiqui added that they also have taken steps to keep up with fashion trends, such as switching out some of their jeans for leggings and joggers in accordance with new styles.

District 65 currently allows ESCCA to use space in JEH for free, but a recent renovation to add a welcome center to the building has cut ESCCA’s space in half. Co-President Tracy Gallun said the volunteer team of around 50 core members has done a good job providing great service despite the renovations. To compensate for the size reduction, ESCCA moved some of its items to a storage facility and took space from the break room.

In addition to the reduction in its operational space, the organization sometimes struggles with recruiting volunteers.

Each school in District 65 is responsible for scheduling a certain number of volunteers to go in on a “serve night” to help students and families. This is how volunteers like Siddiqui and Gallun became involved.

“Our core volunteers, some of them have been with us for decades,” Gallun said. “They started getting involved in ESCCA, like myself, for the night their school was appointed. Then they come into a more permanent role, either as a permanent volunteer in the sort room or on the board or at serves, and they’ve just stuck with us.”

Over the years, ESCCA has integrated itself into the fabric of the District 65 community, Gallun said.

“We are very encompassing,” Gallun said. “The whole mission really feels true to the spirit of Evanston as a community, making sure everyone is taken care of and that no child misses school for any reason.”