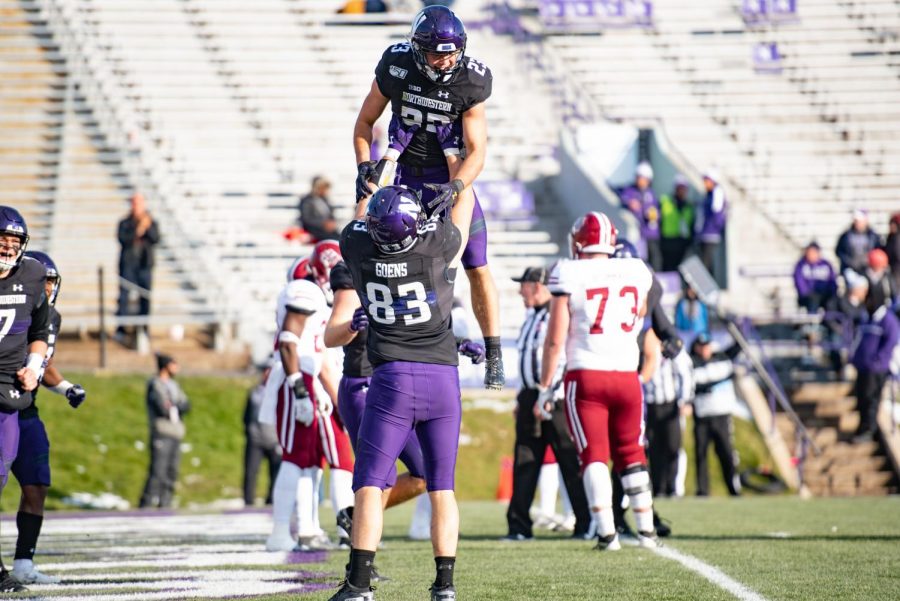 Northwestern has been through a lot in the last two months.

The Wildcats’ 45-6 win over UMass on Saturday did little to change the trajectory of their season. But NU (2-8, 0-7 Big Ten) was still able to breathe a collective sigh of relief.

“It was good to wash that sour taste out of our mouths of losing,” senior defensive lineman Joe Gaziano said. “It’s a good feeling to win at home.”

Still, the first quarter went as poorly as the Cats could have possibly imagined. NU went three-and-out on its first possession and junior quarterback Aidan Smith was intercepted on the next two. The Minutemen (1-10) were up 3-0 after 15 minutes and were set to attempt another field goal as the second quarter began.

Gaziano blocked the kick, and junior linebacker Chris Bergin scooped it up and scampered 85 yards down the right sideline for a go-ahead touchdown.

“I turned around, and the ball bounced into my hands,” Bergin said. “Cam (Ruiz) and JR (Pace) did an unbelievable job escorting me to the end zone without much problem.”

The special-teams score was exactly the the tide-turning play the Cats needed — they scored two more touchdowns before halftime, then pulled away in the fourth quarter to nearly cover the massive 39.5-point spread.

Nearly all of NU’s production came on the ground. The Cats ran the ball 52 times and attempted just 13 passes, but with NU leading for three quarters and the UMass defense offering little resistance, there was no reason to change things up.

Freshman running back Evan Hull led the Cats’ rushing attack, bursting onto the scene with 220 yards and the first four touchdowns of his career on 24 carries. NU compiled 334 rushing yards in all, and it would have been even more if not for a pair of fumbles.

Hull scored the Cats’ first offensive touchdown of the game with eight minutes left in the half on a six-yard burst up the middle. He added a 38-yard score five minutes later to put his team ahead 21-6.

“Coach Lou (Ayeni) let me know on Wednesday that I was going to be starting,” Hull said. “It feels really good. Guys are dancing in the locker room, we got to sing the fight song that we haven’t sung in a long time, so morale is high.”

His big day overshadowed a poor performance from Smith, who completed seven of 13 passes for just 76 yards and the two early picks. All of his completions were to junior receiver Riley Lees, the longest of which went for 27 yards.

NU’s 45 points were its most since a 49-7 win over Bowling Green early in 2017, but coach Pat Fitzgerald still said the Cats have a lot to fix offensively and that he was considering benching Smith after the second interception.

“We have to play better on offense to start the game,” Fitzgerald said. “We can’t turn the ball over. When you do that against any team, you put yourself in position to lose games. We’re doing things that losers do on offense.”

But for the first time since September 14, NU was not a loser. Hull added two more touchdown runs in the fourth quarter, and freshman receiver Raymond Niro even found the end zone as well.

The Cats also played penalty-free for the first time all year after being penalized nine times in each of their last two games.

“The mood was great,” Gaziano said. “The guys realized how hard it is to win in this league, especially after this year. To be able to get a win like this in our home stadium is thrilling. The agony of defeat and the thrill of victory, you feel that every week, so we’re happy to be on the other side.”