Football: Evan Hull makes the most out of his opportunity with depleted running back corps 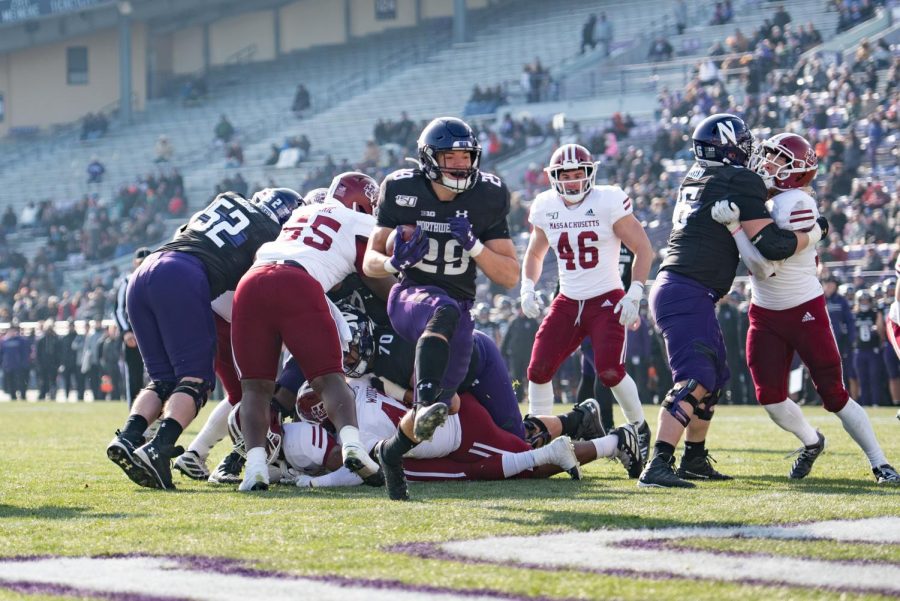 Evan Hull scores the first touchdown of his career. The freshman finished the day with 220 yards and four touchdowns.

If a Northwestern running back’s name is mentioned in the same conversation as Ezekiel Elliot or Justin Jackson, he has to be doing something right.

And running back Evan Hull seemed to do everything right on Saturday. The freshman from Maple Grove, Minnesota had the best game of his young career and one of the best in recent Big Ten history.

Hull finished the game with 24 carries for 220 yards and four touchdowns, becoming the first Big Ten player to accomplish that feat since Elliot did in the National Championship in 2015. The last NU player to rush for more yards than Hull was in 2016 when Justin Jackson rushed for 224 yards in the Pinstripe Bowl and the last player to score as many rushing touchdowns in a game was quarterback Kain Colter in 2012.

Not bad for a freshman running back.

“It feels very good,” Hull said. “I’ve put a lot of work into this, so to have that happen was a very good feeling.”

The running back position has been in flux from the start of the 2019 season. Sophomore running back Isaiah Boswer was supposed to be the lead back after rushing for 864 yards in Northwestern’s final eight games of last season. But injuries have derailed his sophomore campaign as well as other Wildcat running backs.

Bowser, junior running back Jesse Brown and wide receiver/running back Kyric McGowan have all missed action with injuries despite having significant roles at some point during the season.

With a depleted running back room, Hull had seen action against Nebraska, Indiana and Purdue and had just eight rushes for 15 yards. But despite being used sparingly in three games this season, the freshman stepped into the lead running back role and did not disappoint.

“We’re obviously depleted at that position,” coach Pat Fitzgerald said. “For him to go out there and play the way he did; a great week of practice and he earned the starting role… he did a really good job today.”

Rushing behind an offensive line that dominated the UMass defensive line, the freshman scored the offense’s first touchdown on a 6-yard run early in the second quarter. Hull’s other three touchdowns showed his elusiveness.

On the Cats’ next possession midway into the second quarter, junior quarterback Aidan Smith handed the ball off to Hull again. The play was designed to go to left, but Hull improvised: he cut back to the right, broke two tackles and saw nothing but green grass in front of him en route to his second touchdown.

And Hull wasn’t done. For a team that has struggled to produce big plays all season, Hull helped the Cats out in a big way. With the game already out of reach, he broke off two insurance touchdown runs of 46 and 31 yards a piece.

On the 46-yard touchdown, he broke a tackle and tip-toed down the sideline for the final 30 yards avoiding two hits from defenders trying to push him out of bounds. And he broke yet another tackle en route to his fourth touchdown.

But Hull wasn’t focused on his own performance, and instead was thankful for his offensive line who paved the way for him all game.

“They made my job a lot easier today,” Hull said. “Big shoutout to them. I love those guys. They really got after it today… they had my back out there and we had a good time.”