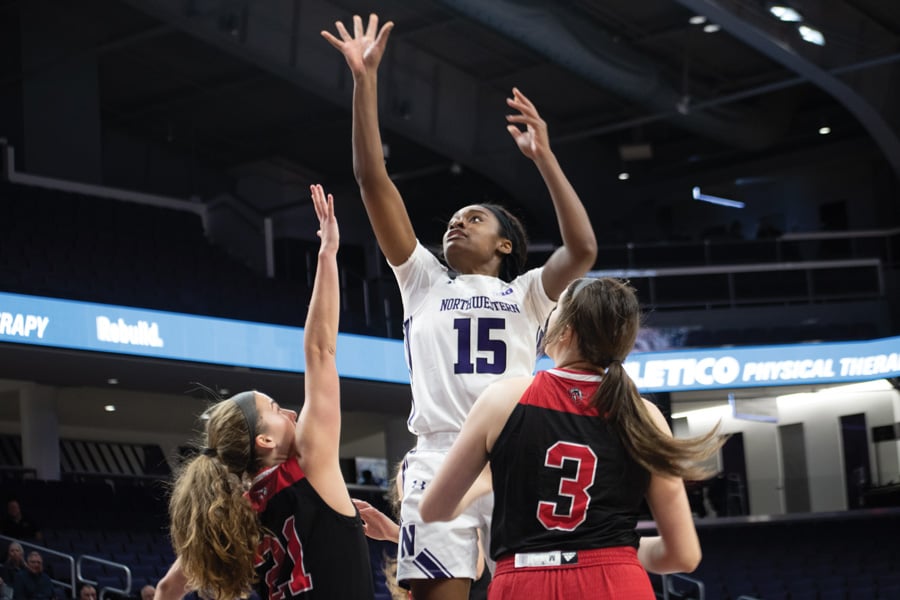 In the last six minutes of regulation, Lindsey Pulliam missed all three jumpers she took. The junior guard didn’t even attempt a shot in the last two minutes, but Pulliam’s teammates picked up enough slack to force overtime.

Then when Pulliam came back onto the court for five extra minutes, the all-Big Ten guard took over. She scored nine points in the five-minute period, outscoring Marquette in overtime to lead Northwestern (2-0) to a 64-56 win over the Golden Eagles (3-1).

“That’s what makes her a great player,” coach Joe McKeown said. “She can have tough quarters, but she’s so mentally tough. She wants the ball when things are on the line.”

Despite her difficult cold shooting at the end of regulation, McKeown started the extra period by calling a play for his team’s best scorer. Pulliam used a ball screen and canned a running 12-footer from the left elbow to take a two-point lead. She was just getting started –– she consecutively made a layup, two free throws and a floater to build NU’s lead.

By the end of overtime, she doubled her scoring total to finish the game with 18 points. But the Cats wouldn’t have even gotten to overtime without Veronica Burton’s clutch fourth quarter. The sophomore guard usually falls behind Pulliam and junior guard Jordan Hamilton in the pecking order. But with Pulliam off her game and Hamilton inactive, Burton scored NU’s last four points of regulation.

McKeown gave her the ball on the biggest possession of the game. With NU down two with the ball with fewer than 10 seconds remaining, Burton received the pass off an out-of-bounds play in the left corner. Then she drove the lane and made a game-tying floater, one of the biggest shots of her young career.

“If Pulliam wasn’t open, we wanted Veronica to come back and get a look,” McKeown said. “I’m proud how she saw it and beat (the defender) off the dribble.”

Burton’s scoring late helped the Cats survive a 19-point fourth quarter from Marquette. The Golden Eagles had fewer than ten points in the first two quarters and only 15 in the third. But their hot 3-point shooting in the fourth quarter gave Marquette its first lead of the game midway through the period.

NU led by eight at halftime but saw the Golden Eagles take a three-point lead with eight minutes to go. But the ensuing stretch by Burton got the Cats to overtime, and Pulliam sealed the win in overtime.

Last season, NU lost by 19 at home to Marquette, a team that ended up a No. 5 seed in the NCAA Tournament. With the win, the Cats gain an important boost for their tournament resume. The team set the preseason goal to make the postseason this year. With their second win of the season, the Cats took a major step in that direction.

“They lost some players to graduation but this was a top ten team last year,” McKeown said. “We defended pretty well and showed we had what it takes to win a game like this.”