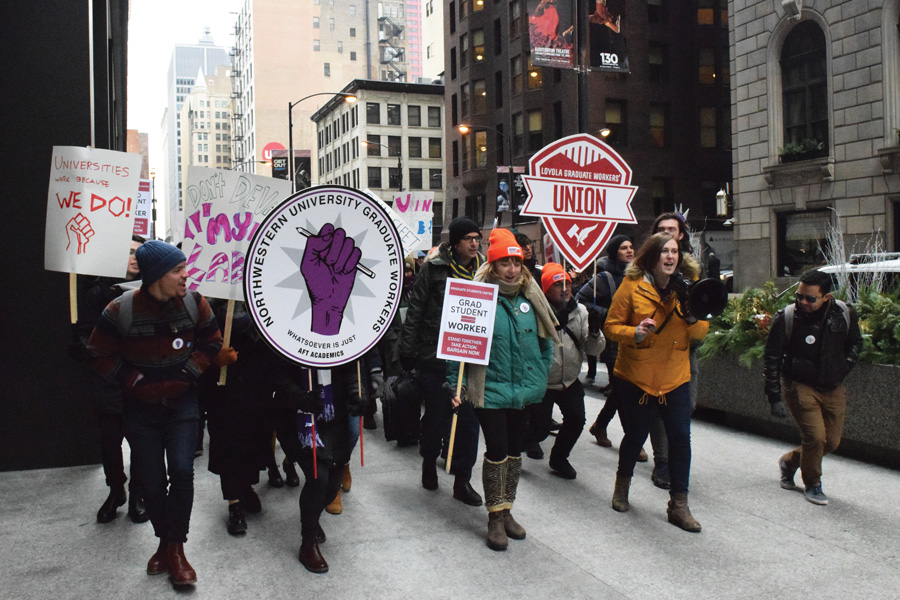 Northwestern University Graduate Workers protest in Nov. 2019. “Unions 101: A Political Education Even” educated attendees on the process, history and types of unions.

Graduate students from Chicago area schools rallied Thursday at the Federal Building to protest the National Labor Relations Board‘s proposed rule that would strip them of their right to unionize.

Northwestern Graduate Workers joined members of the University of Chicago’s Graduate Students United and Loyola University Chicago’s Worker Coalition to picket, chant and give speeches in front of the NLRB’s Chicago headquarters.

The proposed rule, which the NLRB unveiled in September, would classify graduate students at private universities as having a primarily educational relationship with their institutions. Because collective bargaining constitutes an economic relationship, the rule would stop the NLRB from recognizing graduate student unions.

In the proposal, the NLRB argues that recognizing students as employees would create a hostile dynamic between the student and faculty bodies and interrupt an otherwise peaceful academic environment. The proposal also states that students spend “a limited amount of time” doing things like teaching and working as assistants, and use most of their time focusing on coursework and studies.

However, many students at the rally disagreed. By the time they’re done leading discussion sections, grading papers and working on their own projects, they said they have little time left to eat or sleep.

“We do the work that lets the University function,” Mauricio Maluff Masi, a second-year philosophy graduate student at Northwestern, told the group.

He went on to describe wins that NUGW — which is not currently recognized by the University — has accomplished in the past few years, including securing fifth-year summer funding and pushing to roll back Northwestern’s decision not to cap mental health visit copays at $20.

Caroline McCraw, a graduate student from Loyola, took the megaphone and told the crowd that, even though she’s paid by the school, she works four jobs to make ends meet.

“It is frankly insulting to be told that my labor isn’t labor,” McCraw said. “Without the opportunity to organize collectively, the voice of graduate workers will be fragmented and ultimately suppressed.”

She said graduate worker unions and universities should have the same priorities and commitment to their students.

Jesse Sharkey, the president of the Chicago Teachers Union, attended the protest in solidarity with the graduate workers. He also addressed the students, reminding them that people in power don’t give workers rights “because they (don’t) feel like it.”

“Power concedes nothing without a demand,” Sharkey said. “It never has, never will.”

The protesters marched around the building and in the plaza, chanting “What’s disgusting? Union busting!” and “Get up, get down, Chicago is a union town!” before ending the event with the song “Solidarity Forever.”

The protest coincided with similar ones across the country as part of a larger movement of graduate students. The American Federation of Teachers, the national union with which NUGW is associated, hosted protests in Washington D.C. and Boston as well.

Benjamin Zucker, a third-year composition and music technology graduate student at Northwestern, stressed the importance of solidarity between unions at universities in achieving their common goal.

“Many of the unions of Chicago-based universities are out here together, and that shows that it’s part of a larger mission,” he said. “This cannot be stopped in any one place but it also doesn’t happen in any one place. We will not sit down and take this quietly.”